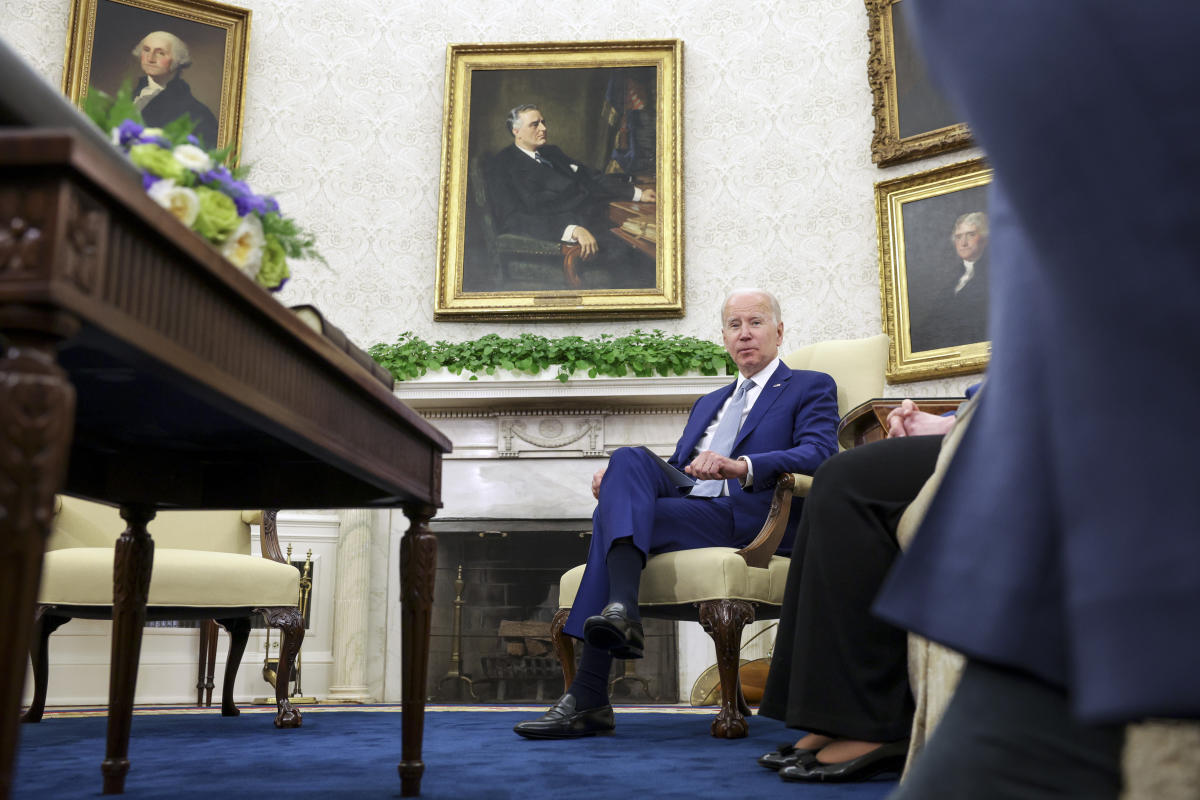 The White House has pushed hard this week to show America it is fighting inflation.

The myriad actions range from an Oval Office meeting with Fed Chair Jerome Powell to an op-ed in the Wall Street Journal with President Biden’s byline to economic officials appearing on television at least 20 times on Tuesday alone – including top Biden adviser Brian Deese on Yahoo Finance.

But the flurry comes after over a year where many have criticized policymakers in Washington for reacting too slowly as inflation spiked to a 40-year high. It also comes as Biden himself is reportedly frustrated that his own administration hasn’t been showing enough concern.

Inflation is “my top priority,” Biden said Tuesday, adding that he aims to “transition from a historic recovery to a steady growth that works for American families.” But he may face an uphill climb with polls consistently showing a low job approval rating on the economy and Democrats bracing for midterm losses.

Furthermore, a review of comments over the last 15 months shows just how often the durability of inflation – along with new factors like pandemic surges and the war in Europe regularly added in – have forced the White House to change its tone month to month. These shifting messages make it look like Biden and his lieutenants, as well as Federal Reserve officials, are constantly playing catch-up.

Here’s a timeline of the White House’s messaging on inflation:

Throughout most of early 2021, Biden’s aides often minimized inflation even as it crept up.

“You know, this is certainly … something that we are watching very, very closely,” economist Heather Boushey told Yahoo Finance on March 10. Boushey, a member of the Biden’s Council of Economic Advisers, acknowledged that outside forecasts showed that inflation would rise “a little bit.”

However, she added, “It probably won’t last long.”

Her colleague Jared Bernstein, speaking to Yahoo Finance that same month about the American Rescue plan, acknowledged that inflation could be a risk. But failing to stimulate the economy also came with risk, he noted.

Biden offered a similar formulation, saying in February that the biggest risk to the economy is “if we go too small.”

Despite the inflationary risks, Biden signed the $ 1.9 trillion American Rescue Plan into law on March 11, 2021. While the cash infusion boosted the still-reeling economy, many economists now cite it among several factors that did contribute to higher inflation.

Over the following months, Biden and his aides were forced to address inflation, though they called it transitory.

“We expect those things to work themselves out,” Brian Deese, Biden’s top economic adviser, told Yahoo Finance in July 2021. “They’re not permanent changes to the structure of our economy.”

Bharat Ramamurti, one of Deese’s deputies, even argued in May that increasing prices showed “the economy is recovering faster than a lot of people expected.” He cautioned against overreacting to the then-nascent inflation threat.

But then in November the Labor Department’s Consumer Price Index (CPI) climbed by 6.8% – marking the fastest inflation increase in nearly four decades.

As inflation continued to climb, the topic of surging prices came up again and again for Biden and his aides – but often as one of many concerns.

“We have challenges and work yet unfinished,” Deese said on Jan. 20, 2022. “The elevated price increases we’ve seen are clearly an issue.”

In February, Bernstein called inflation one of “the president’s top two economic priorities,” alongside jobs. In another appearance that month, Bernstein cited projections that “by the end of [2022]inflation should be growing about half as fast as it was last year. ”

The adjustment at the White House came with a shift from the Federal Reserve, which has also been criticized for moving too slowly on inflation. Powell formally retired the word “transitory” as a way to describe inflation during congressional testimony on Nov. 30.

“The primary lever with respect to inflation is held by the Fed,” Commerce Secretary Gina Raimondo added to Yahoo Finance in January. “So Chairman Powell and his colleagues have their work cut out for them.”

Recent surges, with inflation reaching a level of 8.5% in March, coincided with the economic effects of Russia’s invasion of Ukraine beginning on February 24. The war is now in its fourth month and has upended global markets, especially the energy sector.

“Inflation is and remains a primary concern of the president and his economic team,” Boushey said on March 28. “It’s something we think about each and every day.”

“I’ve been in this business a long time, and I’ve never been part of a White House that is doing more than this White House to try to ease inflationary pressures,” Bernstein added on May 11.

Also in May, Biden took to calling inflation “my top economic priority.” Meanwhile, the Federal Reserve took increasingly aggressive action, raising interest rates by 0.50% on May 4 and signaling that similar hikes are likely to come in June and July. Raising interest rates, which increases the costs of borrowing, is a go-to way for the Fed to induce people and businesses to stop spending and thus curb inflation.

Raimondo, one of Biden’s main conduits to the business community, told Yahoo Finance in May that among business leaders, “There is, I think, gratitude that the Fed took the significant action that they did.” She said it marks a significant “step in the right direction.”

This week, as part of the larger White House effort to reframe the economic conversation, Yellen conceded on CNN that she had been wrong on the “path that inflation would take” over the last year. In 2021, she had said that inflation only represented a “small risk.”

Despite the bigger risk that inflation turned out to be, a slight deceleration last month has many inside and outside the West Wing hoping that inflation has peaked and will begin to normalize by next year.

Ben Werschkul is a writer and producer for Yahoo Finance in Washington, DC.