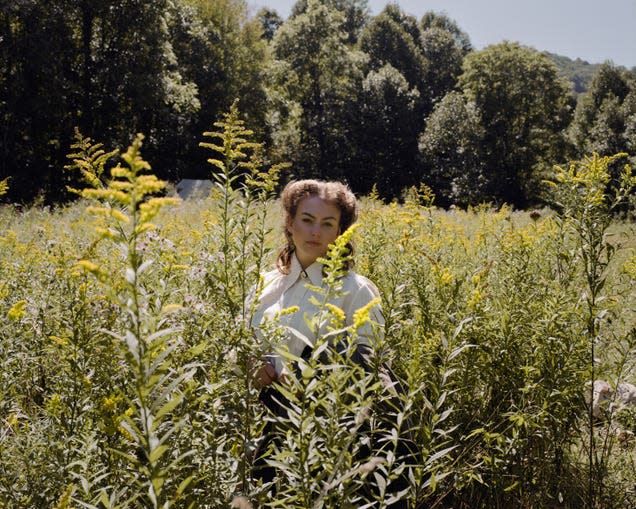 Angel Olsen has traversed many genres throughout her career, all the while maintaining an experimental edge within what would normally fall under the umbrella of “folk.” But with all that experimentation, she had never fully delved into the vast frontier of country — until now. Her new album, Big Time, which she previously teased with the release of the single “All The Good Times,” proves this move was long overdue. From the subject matter to the natural twang in Olsen’s voice, the genre offers the ability to hold the story she wants to tell.

Over the course of the pandemic, Olsen grappled with her sexuality, entering a same-sex relationship only to see it end in a stomach churning heartbreak. After coming to terms with her newfound identity, Olsen finally built up the courage to come out to her parents, who welcomed the revelation with open arms. This relief would soon turn into grief, though, as both her mother and father died soon after.

In a profile in The New Yorker, Olsen says she found inspiration in legends such as Dolly Parton, Nancy Sinatra, and Loretta Lynn. All three women showcase a talent for spinning their heartbreak into gold, which is where they align with Olsen. In the Big Time, she creates her most beautiful work yet, a tapestry of pain, love, and acceptance — not only of the self, but ultimately of what we have to leave behind in this life.

While the St. Louis songbird never runs low on melancholy, she rarely contends with grief. This time, though, feelings of loss form the foundation for Big Time. This grief, though, also comes with a sense of peace and serenity, the kind that can wash over someone as they look at a western sky. Olsen leads us through an Americana-driven journey, taking certain, metered steps as she goes. The songs don’t sit heavy on the mind. Rather, they feel like a hand guiding the listener through the lessons Olsen has learned over the last few years. She brings a well-earned wisdom, and no longer feels as though she’s fighting herself. She trusts her ability to surmount sorrow.

Ruminations on the past fade in and out on Big Time, in songs like “All The Good Times” and “Dream Thing.” In the latter, Olsen leans into country instrumentation with the new inclusions of the pedal steel and organ, which provide a richness behind her tender vocals. By the end, the track takes on a dreamy quality, with Olsen’s lulling voice guiding the way. This steadiness continues in “Ghost On,” where the bass takes the lead in a slow dance. In the offering, we get the taste of a woman who refuses to fit into the images projected onto her by others.

The power center of the album falls on “Right Now,” as Olsen asserts herself as someone who moves at her own pace, singing, “You can slow down I ain’t going fast.” Opening with a simple acoustic guitar line, everything eventually builds into a thunderous bridge, reminiscent of those found on All Mirrors. It’s here that Olsen strikes a perfect balance within her two songwriting extremes. Lightness and hope swoop into the song with a trilling guitar, which parts the clouds and lets the sunshine in. In two of her previous songs— “Chance” and “Give It Up” —she asks, “What is it you think I need?” In “Right Now,” she’s no longer asking, but telling the listener who she is and her point of view, which is, “It’s time to let it go.”

Grief creeps back in with “This Is How It Works,” where we find a singer who’s tired of the pain and the bad news. Olsen pops in for a sit, akin to taking a seat at an old empty bar with a sympathetic bartender at the helm. Weary from grief, she begs the listener to “tell [her] something good. ” Olsen looks for sympathy and understanding once again in “Go Home,” with its striking snare and subtle strings. Her voice takes on a wallowing quality, as she nearly sobs, “I’m dancing, baby, but I feel like dying.” Even then, the idea of ​​letting go of the past and moving on arises again as the song closes with the lyrics, “How can I go on? Forget the old dream, I got a new thing. ”

Each song within Big Time offers its own odyssey, imparting new lessons along the way. Life has given Olsen hell the last few years, but even with that comes the new joys of fresh love (exemplified in “Big Time” and “Chasing The Sun”) and a newfound wisdom. Big Time is a monumental work on loss and how quickly things can change. We see Olsen come into a new power as a songwriter, resulting in an album filled to the brim with radiance and conviction.