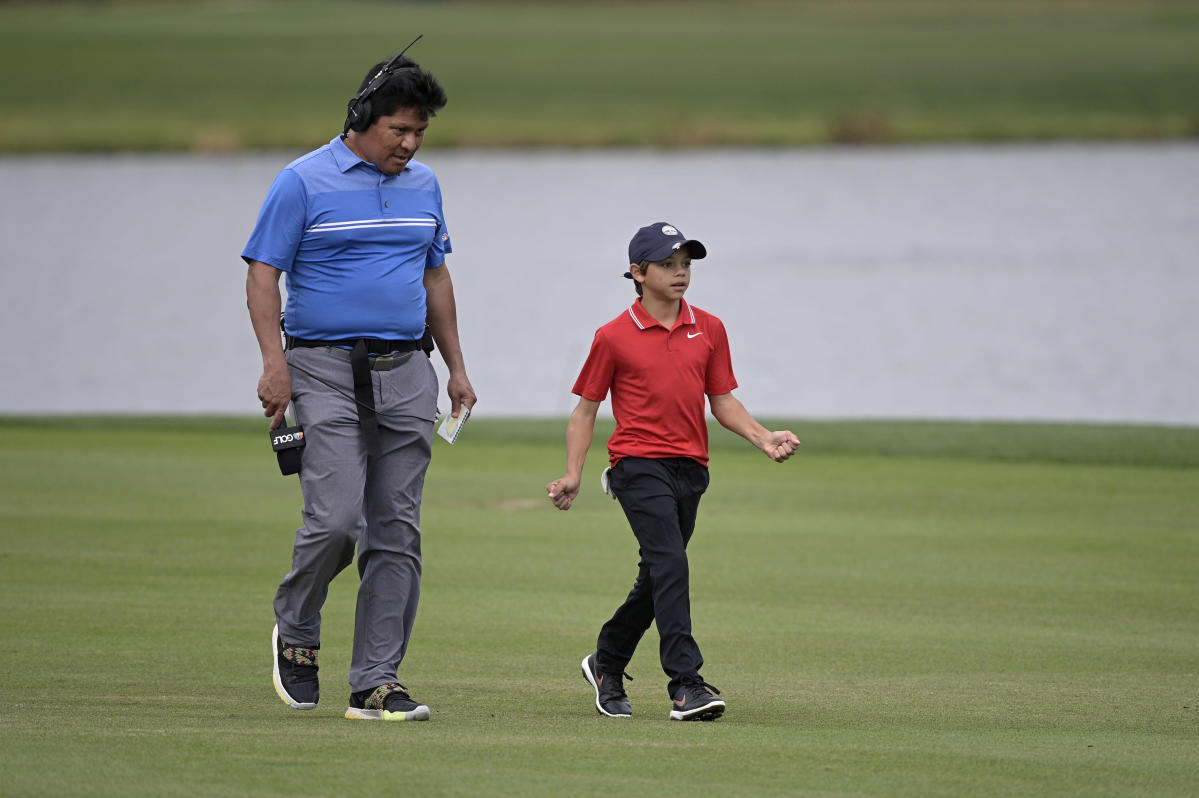 Notah Begay III is competing in a tournament for the first time in nearly 10 years, and the score isn’t what matters to him.

His appearance on the Advocates Professional Golf Association Tour in Arizona has been a mixture of inspiration and appreciation.

Begay, a four-time PGA Tour winner and now an on-course reporter for NBC Sports, was on the broadcast crew for the APGA Tour event on Sunday after the Farmers Insurance Open at Torrey Pines.

“I was impressed by the caliber of playing out there. I wanted to get to know more about the tour, the players, and what their objectives are going forward, ”Begay said. “There’s no better way than to be a part of it.”

Back injuries cut short his career. Begay’s last tour event was in August 2012 at the Reno-Tahoe Open. He wasn’t sure what to expect on the Champions course at the TPC Scottsdale, though he acquitted himself nicely with a 1-over 72 on Monday and was tied for 16th in the 51-man field.

The final round was Tuesday.

Begay has always been about access, which includes his NB3 Junior Golf Tour, in which kids compete in tournaments throughout New Mexico and surrounding states, culminating with regional and national championships. Financial assistance is available.

The APGA Tour began in 2010, established to prepare Black golfers and other minorities to compete and build careers on tour or in the golf industry. It has gained momentum in recent years with sponsor exemptions at PGA Tour and Korn Ferry Tour events, and with a schedule that is starting to include TPC courses for its 36-hole events.

The one at Torrey Pines on Sunday – the PGA Tour event ended on Saturday this year to avoid conflicts with NFL conference championships – was the first one to be televised live.

Begay was working and watching.

“I’ve been doing some research, just seeing the records they’ve had and where they come from,” he said Sunday evening. “I’m just trying to be more informed.”

Plus, the competition might serve him well. He turns 50 in September and will be eligible for the PGA Tour Champions.

The leadership for the International team in the Presidents Cup now represents every continent that make up the team facing the United States.

The matches are Sept. 22-25 at Quail Hollow Club in Charlotte, North Carolina.

Choi, Ogilvy and Weir are serving as assistants for the third time. The newcomer is Villegas, whose lone appearance in the Presidents Cup was in 2009 at Harding Park.

“Although it has been over 10 years since I played the event, I still have fond memories that are unforgettable, so joining on the other side as a captain’s assistant will be a highlight of my career,” Villegas said.

US captain Davis Love III last week said Zach Johnson – the next Ryder Cup captain – and Fred Couples would be his assistants. He hasn’t announced the other two, though Love said Tiger Woods could have any role he wanted. Woods was captain at the last Presidents Cup at Royal Melbourne in 2019 and chose not to return.

The International team has only one victory, in 1998 at Royal Melbourne, since the matches began in 1994. The 2003 event ended in a tie.

Mission Hills lost the LPGA Tour’s first major to Houston under a new sponsorship deal. In its place will be a PGA Tour Champions event next year, the first tournament in the California desert for the senior circuit since 1993.

The PGA Tour Champions announced a partnership with healthcare company Grail to sponsor The Galleri Classic, named after Grail’s multi-cancer early detection test. The tournament will be March 24-26 on the Dinah Shore Tournament course at Mission Hills, which had hosted the LPGA Tour for 51 years.

That PGA Tour Champions was last in the Coachella Valley in 1993, when Raymond Floyd won the final edition of the Gulfstream Aerospace Invitational at Indian Wells. The PGA Tour has been in the Palm Springs area since 1960 in what began as the Bob Hope Classic and is now the American Express.

John Daly and his son now have an endorsement deal with Hooters.

Daly has had a long relationship with Hooters. John Daly II, a freshman at Arkansas, signed as a name, image, likeness ambassador. It’s the first NIL for Hooters. The company said Daly and Son, who won the PNC Championship in December, will promote the brand through various marketing activities, such as social media and other digital channels.

“Hooters is the ideal place for me to go and unwind after a long day on the course or in the classroom,” Daly II said in a release. “I have seen my father’s great relationship with Hooters over the years, and I am proud to continue my family’s association with this iconic brand.”

The restaurant, which dates to 1983 in Florida, is famous for hiring young women as servers wearing skimpy uniforms. The menu specialty is chicken wings.

Just over a year after Anna Davis won her first AJGA title, the 16-year-old from San Diego County is about to make her LPGA Tour debut.

Davis earned national acclaim by winning the Augusta National Women’s Amateur three weeks ago as the only player to finish under par. She has received a sponsor exemption to play in the Palos Verdes Championship next week in Los Angeles.

Davis, the left-hander in a bucket hat, has put together an impressive year. After winning that AJGA title, she recorded a seven-shot win in the Girls Junior PGA Championship at Valhalla and was named to the Junior Solheim Cup and Junior Ryder Cup teams. She has finished among the top four in all five of her World Amateur Golf Ranking starts this year.

Jordan Spieth and Under Armor have extended their partnership through 2029, meaning he will be with the Baltimore-based shoe and apparel company for at least the first 17 years of his career. Under Armor is also giving $ 1 million to the Spieth Family Foundation over the next eight years. … Alexa Pano has turned pro and makes her debut on the Epson Tour this week in Utah. … Texas teammates Cole Hammer and Pierceson Coody, along with Eugenio Chacarra of Oklahoma State and Sam Bennett of Texas A&M are among the 10 semifinalists for the Ben Hogan Award that goes to the top male collegian. Three finalists will be named May 5. Coody was a finalist last year. … Augusta National Women’s Amateur runner-up Latanna Stone, Amari Avery, Megha Ganne and Emilia Migliaccio were chosen to fill out the US team for the Curtis Cup at Merion on June 10-12. They join Rose Zhang, Rachel Heck, Rachel Kuehn and US Women’s Amateur Champion Jensen Castle.

STAT OF THE WEEK

Jordan Spieth was the seventh player this season to come from at least three shots behind in the final round to win on the PGA Tour.