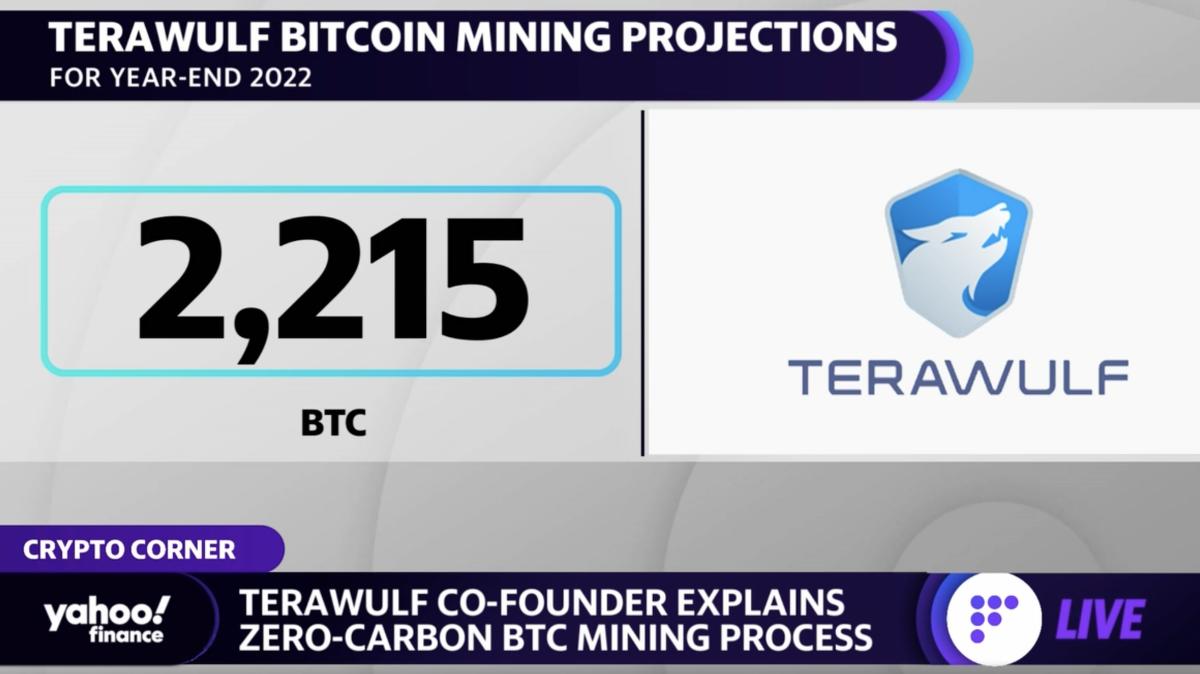 TeraWulf Co-Founder, CEO & Chair of the Board Paul Prager joins Yahoo Finance Live to talk about zero carbon mining for bitcoin and other cryptocurrencies, outlook on profitability, and sustainable energy alternatives.

BRAD SMITH: Welcome back to “Yahoo Finance Live,” everyone. Has crypto mining progressed to be more sustainable? TeraWulf generates revenue by sustainably mining Bitcoin at its facilities in New York and Pennsylvania.

And the founder– well, the co-founder and CEO and chair joins us now. Great to have you here with us today. We got to dive right in in the interest of time here. 800 milliwatts of zero carbon energy mining by 2025 is a goal that the company has set. How have you been able to refine the mining process in order to reach that target?

PAUL PRAGER: It’s not about refining the process. It’s about the source of electricity. And we’re focused on zero carbon. And we’re getting that from hydro and from nuclear.

PAUL PRAGER: So at the current time, the intention is to hold most of it, but the company reserves the right to sell to afford CapEx. Building out these facilities is somewhat capital-intensive, but our focus has been to get the energy infrastructure done first. And that way, you have the plugs with the infrastructure built, so you can optimize around the value of those plugs.

BRAD SMITH: Who do you imagine some of the consumers– the customers of yours would be if you did decide to sell in the future?

PAUL PRAGER: So we’re a proprietary miner. So we’re mining for ourselves. And we expect to have investors who like that model as opposed to, for instance, the host model, which is very, very different.

It has very different risk elements to it. And ultimately, we would sell our Bitcoin, if we chose to sell, to the market. I mean, there’s no shortage of liquidity in terms of wanting to sell Bitcoin today.

BRAD SMITH: Selling to the market, would you do that as your own company, your own entity, and engage directly with prospective Bitcoin or cryptocurrency buyers? Or would that be to another entity, perhaps an app that holds Bitcoin and custodial services and allows others to buy into that? What would that look like?

PAUL PRAGER: Yeah, I mean, you would work through the pools, but again, our model is to try and hold on. I mean, we’re taking a local commodity, which is electricity, and we’re converting it into sort of a global store of value, which is Bitcoin. Our intention, again, would be to hold on to the Bitcoin. And if you need to sell to afford CapEx, then you make that decision. But ultimately, our goal would be to always look for the least expensive capital.

BRAD SMITH: You operate a facility in New York. What might other states be learning from the early moments of crypto mining in the Empire State?

We love the regulatory environment in New York. We particularly like it in Pennsylvania, where they’re very supportive of nukes. And I think it’s important to embrace regulation for cryptos, so I think it’s a state-by-state question.

BRAD SMITH: What are the other states outside of New York and Pennsylvania that you look at and say, hey, that could be promising for future mining? And in a sustainable way, as you mentioned.

PAUL PRAGER: I think you could look at a place like Alaska, at hydropower as an example. You could look in Montana and some of the hydro runoff there. I think nuclear power is unique.

We’re the only folks that are focused on nuclear power and have a facility that’s taking electricity from a nuke. I think that’s critical because those nukes provide massive spinning reserves. We, as an intermittent resource, we can go up and down.

We could be an anchor tenant for that nuke. And provide a basis for them to keep the grid stable. So I think nuclear power and hydro are most important because you could achieve scale, which again, lowers your risk and lowers the cost of production of Bitcoin.

BRAD SMITH: What do investors need to know about your business model when evaluating the share price? The company just went public last year.

PAUL PRAGER: Right. And I think there are three things about us that we think are rather different. The first one is, we’re vertically integrated. So if you are a miner and you’ve gone to a host who’s buying electricity from a utility, when you have an issue, there’s a lot of people that you call and there’s a lot of change orders that get filed. When I have an issue on one of my sites, I call Gary or I call Doug and they’ve both worked for me for 20 years. And I think that’s very important.

The second thing is, there’s a leakage in price. Because those are three separate, not always aligned profit centers in a host model. If you’re vertically integrated, it’s one profit center. So I think that’s an important element. The second, and I think most important, is ESG.

Today, if you are mining using a fossil plant, you’re exposed to all sorts of gas price volatility. You had a segment on here about gas price. I mean, it’s insane what’s going on in the market.

Now you’re going to have to post credit to the grid to be able to ensure that the grid can count on you as a customer given the gas price volatility. So I think zero carbon, vertical integration. The last thing for us is, we’re a very seasoned management team.

I built out the Marathon facility in Montana. My team has been together for 20 years. Five of our eight executives are women.

15 of our leadership have been together for over 15 years, so we’re a seasoned energy infrastructure team. And I think, as you’re seeing, we’re talking about the challenging markets today–

PAUL PRAGER: And you want to have a seasoned management team so that you know how to deal in difficult markets.

BRAD SMITH: Paul, we got to leave things there on the day. Certainly appreciate the conversation. We want to check back in the future as it’s a big topic, making sure that any mining that does going forward is sustainable and environmentally friendly. Paul Prager, who is the TeraWulf co-founder, CEO, and chair of the board joining us here this afternoon. Enjoy it.