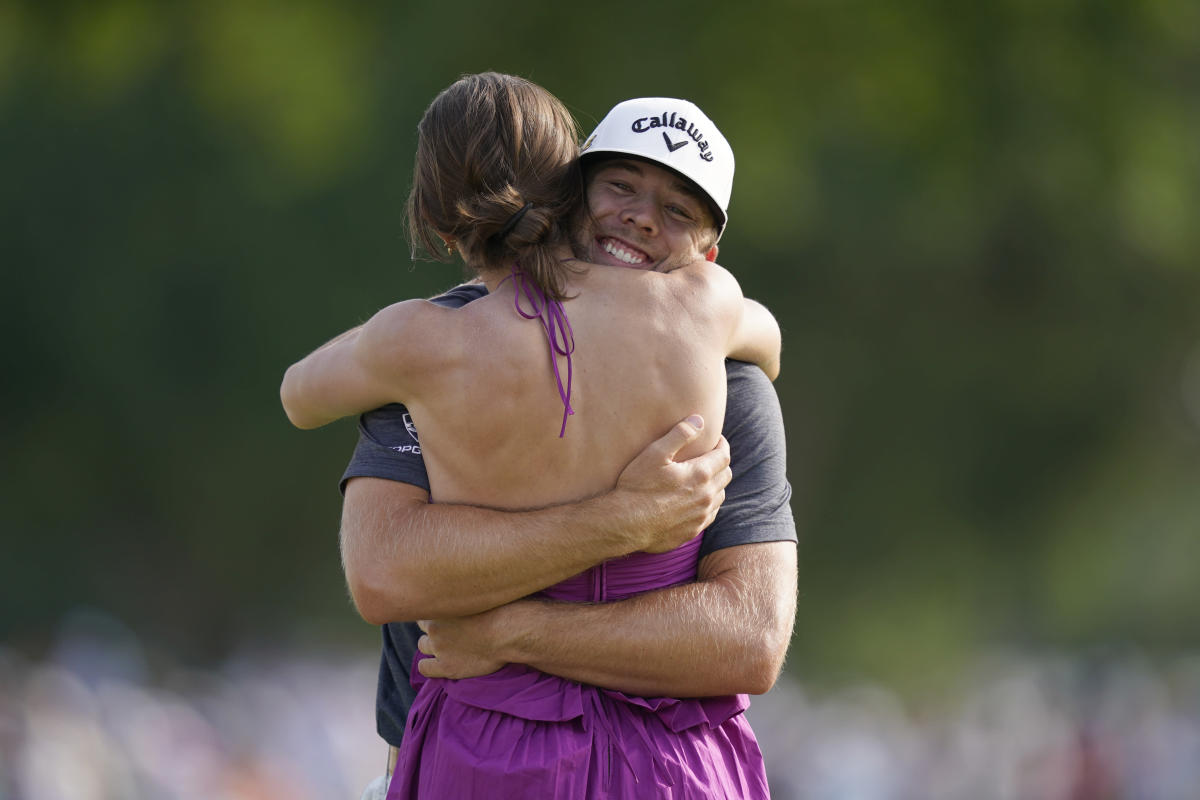 FORT WORTH, Texas (AP) – Sam Burns has a winning moment of his own at Colonial.

Just over two hours after finishing his round of 5-under 65 to get to 9 under, Burns came back out for a playoff and made a 38-foot birdie putt on the first extra hole Sunday to beat Scottie Scheffler, his best friend the No. 1 player in the world.

After Burns had a birdie chance stop just inches short at No. 18 to finish his round, there were still eight groups left on the course. Scheffler was in the last of those, and at one point during that time was among five players tied at 10 under on the back nine.

The gusty wind changed all that. And Scheffler needed three clutch putts for a 72 just to get into the playoffs between the 25-year-old standouts.

“I can assure you I didn’t envy them while they were out there playing,” Burns said. “Didn’t feel like it was blowing any less than we were out there, it was just one of those things when you finally finish, you’re just ready to be done.”

The seven-stroke comeback matched Nick Price in 1994 for the biggest in a final round to win Colonial. And it came 11 years after Burns was there as a teenager when David Toms, also a former LSU Tiger, won after taking the lead for good with an 83-yard wedge shot for eagle at the par-5 11th.

“I remember that week like it was yesterday,” Burns said.

The playoff began with drives into the fairway at No. 18, the same hole where just moments earlier Scheffler made a 6-foot par after his approach on his 72nd hole went into the bunker.

Scheffler got on the green with his approach in the playoffs, but was 36 feet away. Burns hit just off the back edge of the green his put curled the last few feet into the cup. Scheffler made a good run with his putt, but didn’t have a birdie all day.

“With the gusts as high as they were, it was really difficult to putt them. But I gave myself a lot of looks. I just didn’t have it today, ”Scheffler said.“ Props to Sam. He played great. ”

It was the third win this season for Burns, and fourth overall in his last 27 starts. The world’s 10th-ranked player won at Valspar for the second time in March.

The win at the Charles Schwab Classic was worth $ 1,512,000, along with a plaid jacket and a custom-built 1979 Schwab Firebird Trans Am.

Masters champion Scheffler was going for his fifth victory in his last 10 starts. He missed becoming the first player since Tom Watson in 1980 with five wins in a PGA Tour season before the start of June.

Burns was 5 under on the front nine to make his turn at 9 under. He had birdie at No. 11, but then had bogey after a wayward tee shot and a penalty stroke. He parred out and then waited.

After Scheffler’s first putt at the 17th went 8 feet past the hole, he pumped his fist when he made the par save. That was even more emphatic than his reaction when he also pushed a birdie attempt 9 foot past at No. 15 and also saved by there.

Temperatures were again in the mid-90s with sustained wind of more than 20 mph gusting to more than 30 mph, much like Saturday. The greens got firmer, and the wind made it even more difficult to get on – and to putt when players did.

Stallings was 10 under when he flew his approach over the No. 12 green onto a slope with his view to the green obstructed by a temporary TV tower. After getting a drop from that, relief from standing on a sprinkler head and then even more relief from a temporary sign, Stallings was 43 yards from the hole with a direct line to it. But his approach came up short and he ended up with bogey.

Harold Varner III, in contention for his first PGA Tour victory, was in the group with Stallings and also fell out of a share of the lead when he four-putted from just inside 20 feet after the long wait for a triple bogey. He had two double bogeys and another triple bogey after that for a back-nine 10-over 45. He shot 78 to tie for 27th at even par.

During that delay, Scheffler was on the fairway at No. 12 and suddenly back in the lead alone at 10 under. But that was short-lived. His approach came up just short and he missed a 3 1/2-foot par putt.

PGA Tour rookie Riley took the outright lead at 11 under with sixth birdie of the day, a tap-in at the par-5 11th after chipping from behind the green after a 340-yard drive and a 305-yard approach. But his par putt at No. 13 curled off the cut and his drive at No. 14 went out-of-bounds on way to double-bogey 6.