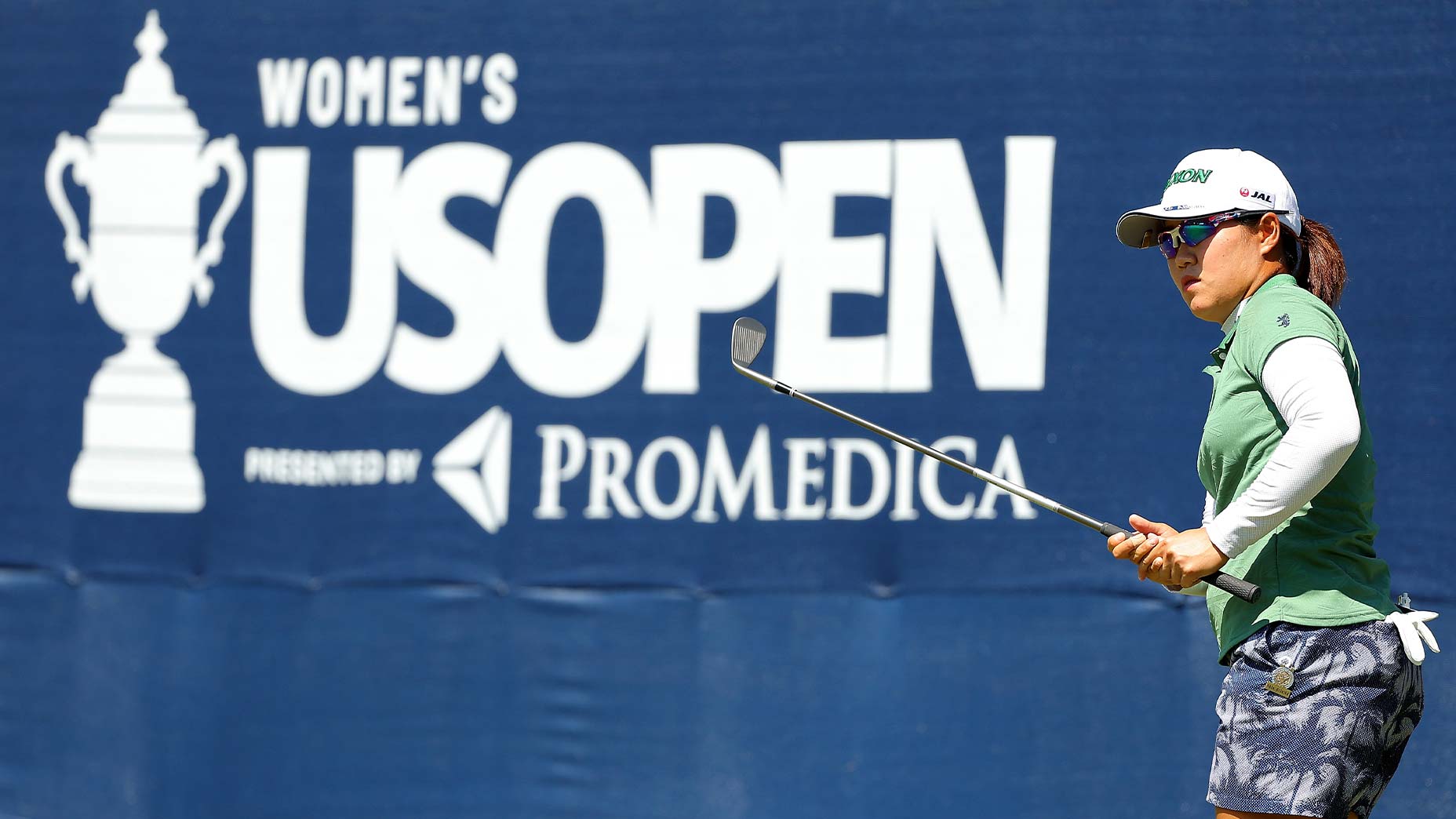 The US Women’s Open purse is nearly doubling in 2022, but what does it mean?

SOUTHERN PINES, NC – By now, you’ve no doubt heard the argument for why women’s golf “can’t” rival the men’s game.

There’s just not enough interest in the women, the reasoning begins. So there aren’t enough fans who tune in. So there isn’t enough revenue to support an earnest effort at closing the pay gap. So there isn’t a reason for TV networks to go all out. So women’s golf is smaller than men’s.

And by now, you’ve also heard the retorts. That men’s golf reached its place in our collective sports conscious by virtue of a massive, sustained marketing effort that brought with it awareness and interest. That women’s golf receives less than half the men’s national television hours in a given year. That the entertainment product is equally as good, the stars equally as talented, and the competitions equally – if not more – enjoyable to watch. That if only the women had the same investment from golf’s stakeholders, they’d be equally as successful.

It’s like that old parable about a city on a hill. The point of the story, we’re told, is that the city wasn’t meant to be hidden. That it was meant to shine from its place on the hilltop for all to see.

But what happens when the city on the hill is hidden? At the USGA, there’s a new solution: build a bigger one.

At this week’s US Women’s Open, the biggest event in women’s golf will also offer the biggest purse in the sport’s history. Thanks to a title sponsorship from healthcare giant ProMedica, $ 10 million in prize money will be distributed to those at Pine Needles – a sum higher than many PGA Tour events, and just $ 2.5 million below the purse the USGA handed out at the men’s Open at Torrey Pines last summer.

It’s a change the USGA hopes will provide a tectonic shift in the way earnings are distributed in women’s golf, setting the stage for bigger stakes, bigger events, and hopefully, a bigger sport.

Of course, the cash infusion will not guarantee interest, ratings, or money. But some things require a leap of faith, and after years of successfully expanding coverage and scope, the Women’s Open was a proposition worth betting on.

“It’s really important that organizations like the USGA buy in and increase the purses,” Michelle Wie-West told GOLF.com. “It levels it up for everyone else to have to compete with that and level it up.”

The Women’s Open is a fitting place for Wie-West to end her playing career. In 2003, at the tender age of 13, she competed in the Open for the first time. In 2014, she won her only major championship here, at Pinehurst No. 2. Now, she’ll play her final professional event just down the road at Pine Needles, retiring from the sport after the week to pursue initiatives in support of women’s golf . And what better swan song for the sport’s most powerful marketing influence than to move into a post-playing career on the heels of the biggest tournament purse ever?

“It’s always really important for that first buy-in to increase the purse,” Wie-West said. “The USGA has done such an amazing job over the years to always be that pioneer.”

Wie-West’s hope is for the next generation of teenage stars – a group led, of late, by Anna Davis, the 16-year-old Augusta National Women’s Amateur winner making her US Women’s Open debut this week.

No player in the Women’s Open field is less affected by the purse jump than Davis. As a high school sophomore, she’ll remain comfortably under the financial stewardship of her parents for the foreseeable future, and as an amateur, she’s not eligible for a payday, anyway.

But even if she won’t be cashing in, she’s not oblivious to the role money plays in her sport.

“Especially with the US Women’s Open, it’s such an important event,” Davis said. “There’s obviously a lot on the line, and it’s a lot more fun to play for something like that. The pressure and stress that the girls have to experience – obviously not me yet – because they’re playing for such a large amount of money, I think it’s cool. I think it’s a good thing. ”

Davis’ swing isn’t the only thing that’s well beyond her years. She understands that ultimately, golf is a business built upon attention. And in this instance, maybe the tail needs to wag the dog.

“I think so [the purse does add to the esteem of the event], ”Davis said. “Especially when they announced that they were going to make it worth so much money. I think there were a lot of heads that turned, and it’s cool, cause you don’t see as many people watching the LPGA as they watch the PGA. And I think this gives them something to look for and watch. ”

Her optimism isn’t just youthful naiveté. It was shared by a growing number of pros around Pine Needles this week. Pros can feel the buzz surrounding the tournament, which will once again earn seven hours of national television coverage split between two prime, weekend slots on NBC.

“It brings more motivation to all of us,” Yuka Saso, the reigning champ, told GOLF.com. “It’s great to have more fans and more people interested in women’s golf. It’s great. It’s why we play golf, we want them to watch us. We want them to say, ‘We can do something too.’ ”

But money, as a handful of pros pointed out, is not a cure-all. Nor is it a factor in the things that are supposed to draw interest in the sport, like the quality of competition or the performance of the world’s best players. “I’m very grateful to ProMedica for putting up and supporting us in women’s golf,” Saso said. “That doesn’t change how I think or how I feel on the golf course. We’re here to win and to make history, we’re not only here to make money. ”

Lydia Ko agrees: “Sometimes I think a purse can really get in the way of what the actual meaning of the tournament is. I honestly think when there’s just so much on the line, none of us are going to think about the money. ”

Ko’s comments raised eyebrows when she first said them in her pre-tournament presser Tuesday morning, but on Wednesday, she clarified that she’d been taken out of context.

Of course the money matters, Ko said, but the idea that women would somehow be thinking about a paycheck – instead of winning the tournament – is ludicrous. (Left unsaid: the double-standard of that suggestion surfacing at a women’s major championship, but not at a men’s.)

“When we’re out there playing, we’re not thinking about what this putt would mean or would relate to money-wise,” Ko told GOLF.com. “But to be on the Tour and to see the talent that’s on the LPGA, or even when we just play other events, or when I see some of the collegiate golfers, I’m like ‘Wow, it’s so empowering.’ I feel like golf has definitely grown and purses keep increasing, but it’s still got a ways to go. ”

It’s an uphill battle to true equity in golf. A battle marred by arguments over coverage, pay gaps, revenues and “brands.”

At Pine Needles, the galleries are quieter than they will be at the US Open later this month. The footprint is considerably smaller. Even the television coverage – which is considered the gold standard for the women’s game – will be dwarfed by the wall-to-wall affair at The Country Club.

When the next argument surfaces about the state of the women’s game, these points will invariably be used to explain why women’s golf “can’t” ever raise to the level of the men’s game. These arguments are not limited to women’s golf or even to women’s sports. They’re arguments that have been faced, in so many words, by women everywhere.

Fortunately, the future of women’s golf is not defined by those who see it for what it is not. The future will be defined by the stakeholders, the governing bodies, the sponsors and, of course, the players. By the people who have made the conscious decision to fight for something bigger than a tournament, a moment, or even a $ 10 million purse.

“I hope that one day it gets to the level of the men’s, like it is for tennis,” Lydia Ko said. “And that might not necessarily be when I play, but to see how much it has changed from our founders and then our pioneers and then from 15 years ago to now, it’s only going up. I’m excited for where women’s golf is heading and I think we’re very grateful for the partners who have continuously supported us and believed in us. The people who see what we see. ”