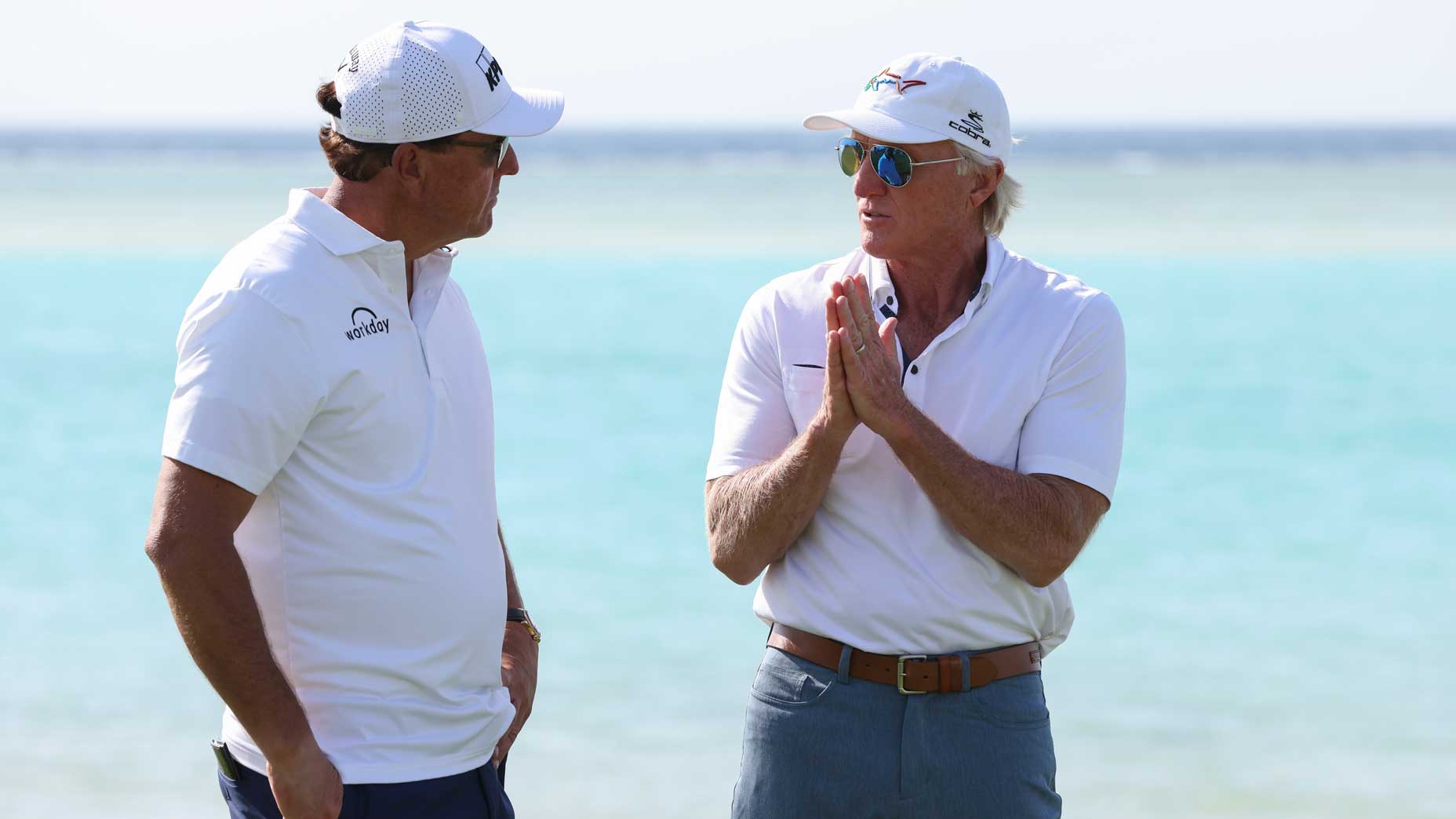 Two of the biggest reasons this will be a weird, weird summer of pro golf: Phil Mickelson and Greg Norman.

In the wake of this month’s Masters, I’ve really struggled to describe it in hindsight. Save for the one hole when Cameron Smith nearly took the lead on Sunday, or when Rory McIlroy capped off a brilliant 64 from the bunker on 18, this Masters lacked its typical flair. There was the cold Saturday, where people ran into the merchandise center to buy clothes just to put them on. There was the five-shot lead that Scottie Scheffler built on Friday, and never once surrendered. There was the looming attention pulled away from the leaders in the direction of Tiger Woods, and his 78th weekend pair.

This year’s Masters was, in a word, just weird.

We might as well get used to that word. Looking at the calendar, 2022 might be the wackiest summer of golf we’ve ever seen, starting with the elephant in the room on the Tour.

Tiger Woods did Mickelson a favor at the Masters, simply by showing up. Woods was the story of the Masters, dating back as far as weeks prior when fanboys repeatedly refreshed the field list on Masters.com. At the bottom of it was Mickelson, listed below not competing. Only a bit higher on the page was Woods, in the field, the story of the event from Day 1. By the time any discussion turned to Phil – when Chairman Fred Ridley said that Mickelson confirmed his plans to miss the Masters via text – the world was swept up in Woods Mania once again.

But that won’t be the case at the PGA Championship next month. Not only might Woods not be around, but Mickelson’s return as the defending champ is in question, too. There is no way to preview the PGA without discussing the defending champ. It’s impossible. You can’t write about it, you can’t ask players about it, the PGA can’t promote itself in TV commercials without discussing Mickelson. That’s the world we’re living in right now: a bucket full of uncertainty around one of the most popular golfers on the planet.

If not the PGA, then when will Mickelson return? Could it be at the US Open at Brookline? Or – gasp! – a LIV Golf event, potentially the weirdest events of all?

How does one properly assess the potential for LIV Golf Invitationals? They’re going to happen, we think. There’s a full schedule of eight events listed online, but at this point, seven weeks away from the first iteration of shotgun starts and three-round events, we only know of one competitor who plans to be there in London: Robert Garrigus. Are more names coming? Surely. We just don’t know who, and that feels important.

There will be an announcement soon, but we’ve said those six words on repeat for months now. Will the events be visible to the public on your television screen? TBD. Will you be able to purchase tickets to see them in person? Yes. But would you buy an event ticket without knowing what golfers you’ll be watching?

One of the events will go where no other golf brand seems comfortable right now: Trump Bedminster. The last time a pro golf event was hosted at Donald Trump’s New Jersey club, it was the US Women’s Open in 2017, a clear five years before this year’s LIV Invitational starting on July 29th. Things were different then, for all involved.

There was supposed to be a major event at Bedminster next month, but that all changed on Jan. 6, 2021. Trump Golf will get its pro event at Bedminster in 2022 after all, during the same weekend as the Rocket Mortgage Classic – squarely between the Open Championship and the FedEx Cup Playoffs. Money will be flowing in July and August. To whom? It could be anyone at this point.

Quarterbacks during the US Women’s Open

Less weird, but still weird nonetheless, is the next iteration of Capital One’s The Match. What started with a fake rivalry between Woods and Mickelson eventually made its way to a real rivalry between Bryson DeChambeau and Brooks Koepka. This time, none of those guys will be involved. Zero pro golfers, to be exact. Just four quarterbacks.

Aaron Rodgers and Tom Brady will face off against Patrick Mahomes and Josh Allen. That’s fun, right? We think so. But through a stricter lens, it’s harder to see it as a great event for golf. For starters, this sixth iteration of The Match will be the sixth one that does not include a female golfer. To this point, the only female golfer involved in the series has been with Cheyenne Woods as an on-course reporter. What’s more, the event is scheduled for June 1, the Wednesday of US Women’s Open week. Staging a men’s amateur, made-for-TV event on the eve of the US Women’s Open, broadcast in primetime on a different network doesn’t exactly scream out support for the women’s game.

Perhaps that’s not for The Match to worry about. Still weird, though!

A Women’s Open unlike any other

And speaking of the women’s game, there is one particular oddity about this summer schedule we love: a Women’s Open at Muirfield.

Just six years ago, the R&A put the squeeze on the Honorable Company of Edinburgh Golfers when it demanded it change its membership practices to include women. Its 272-year history had gone unchallenged on that front, at least by the R&A, and until they changed, the club would not host any R&A championships. Most notably, the Open Championship.

Only a year later did the club membership react to that call-down by approving female membership. In 2019, 12 female members were added, a tally that has grown to 18 and is expected to grow to 20 by the time the club hosts its first ever Women’s Open in August. According to Lindsey Garden, one of those female members, action has followed from the initial promises.

“When they considered whether they were going to have a mixed membership, it was all or nothing,” she told the Scottish Sun..

“There are still golf clubs in the west of Scotland who will tell women they can join but they can’t play at a certain time or they can’t go here or they can’t play in this competition and so on. With the Honorable Company, everything is even and there is no difference between male and female members. ”

In a column about weirdness, this shouldn’t totally fit. Women playing at Muirfield isn’t weird. It’s close. It’s right. It’s long overdue. But it will be part of the story this summer, no doubt.

Part of the weirdness clouding the Masters was because Woods played, and for two rounds played really well. That first-round 71? Delicate and incredible. But next time we see Woods might not be at the PGA Championship. It might not be at Brookline, either. Both setups do him no favors. His next guaranteed stop, of all places, isn’t at a pro tournament at all. It’s at a pro-am event in western Ireland.

Woods is committed to the JP McManus Pro-Am at Adare Manor in County Limerick. If that was somehow on your Tiger Woods 2022 Starts bingo card, well, congratulations! Anything is possible. Woods will tee it in Ireland on the Monday and Tuesday of the Scottish Open, the week prior to the British Open. Would he even dare fly back to Florida and then into Edinburgh just a couple days later? Surely he wouldn’t put his 46- going on 47-year-old body through that.

He’s done it before. A weird flex that only the most privileged, competition-crazy golfers could pull off without question.

One thing is clear about the trip to Ireland and his early commitment to the Open: Woods is ready for the linksland, and in particular the flattest course on the planet: the Old Course. It’s his favorite course in the world. That doesn’t mean he’ll play well. All it means is we’ll be thirsting over that first round potentially even more than we were two weeks ago in Georgia.

If all of that isn’t weird enough for you, perhaps you’ve grown accustomed to these storylines. They’re coming, each of the next four months. Pause for a second and compare this all to a year ago, when we took the PGA Championships to Kiawah Island and Atlanta Athletic Club. Or to the US Opens at Torrey Pines and Olympic Club. Boy, was that normal by comparison.

Agree? Disagree? Feel free to lob praise, critiques or any commentary to the author at sean.zak@golf.com.