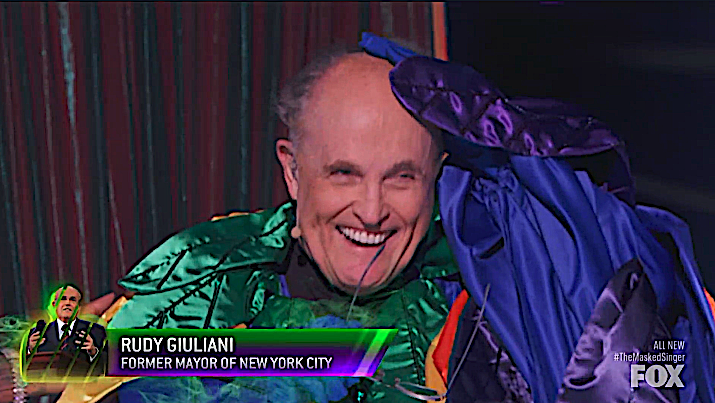 A month before The Masked Singer Season 7 premiered, Deadline and TMZ leaked the disturbing news that Donald Trump’s notorious former attorney and adviser Rudy Giuliani had competed on the show, and that Giuliani’s reveal had shocked everyone in the room. Judge Ken Jeong, a man known for his liberal political views, reportedly had the strongest reaction – storming off the set in disgust while his co-star, Robin Thicke, chased after him to make sure he was OK.

While The Masked Singer has featured some politically polarizing contestants in the past, like Sarah Palin and Caitlyn Jenner, the backlash to those performances was nothing compared to the public outrage surrounding this season’s Rudy rumor. In fact, accusations on social media of The Masked Singer humanizing and normalizing Giuliani (who has been accused of election fraud and encouraging a coup against elected US President Joe Biden on Jan. 6, 2021) were so intense, pundits like myself wondered if his performance would be cut from the show – especially after he did not appear on the season premiere, as Deadline had previously reported.

But as the contestants from Group C, the final bracket of this “The Good, the Bad, and the Cuddly” -themed season, made their debut Wednesday, out rolled the scary-looking Jack in the Box, croaking out George Thorogood’s fitting Bad to the Bone. ” (I suppose it goes without saying that this misfit toy represented Season 7’s “Team Bad.”) The judges ignored that key “four seasons” clue and thought that this bouncy clown might be Robert Duvall, Elon Musk, Joe Pesci, or Al Roker – but really, they couldn’t be expected to guess this guy, who said he “gets put in a box a lot,” correctly.

When host Nick Cannon finally unscrewed Rudy’s Jack-head, his reaction was slightly more muted than usual, but he kept things upbeat and professional, asking, “Mr. Giuliani, with all of the controversy that’s surrounding you right now, I think it surprises us all that you’re here on The Masked Singer. Man, what made you decide to do this? ”

“Well, I guess the main reason is I just had a granddaughter, Grace, and I want her to know that you should try everything, even things that are completely unlike you and unlikely. And I couldn’t think of anything more unlike me and unlikely than this, ”Giuliani answered. “And I enjoy the show – I have for years – and it just seemed like it would be fun. I don’t get to have a lot of fun. ” He later described competing as the Jack in the Box a “wonderful experience.”

Robin seemed taken aback by this not-so-wonderful unmasking, but he too played along as best he could and engaged in the usual post-reveal banter. Meanwhile, judges Nicole Scherzinger and Jenny McCarthy-Wahlberg – especially Jenny – seemed downright delighted to see Giuliani. However, Ken could not and would not hide his disdain.

Ken’s only reaction, on what I assume was a very heavily edited final broadcast, was, “Um… that’s not Robert Duvall. ” He then just stood there – silent, shaken, and scowling, arms crossed. And when Rudy began his show-closing “Bad to the Bone” reprise performance, Ken exasperatedly sighed, “OK, I’m done,” and coolly retreated from the judging desk.

Robin’s reported exit did not air, but we did see Nicole and a particularly enthusiastic Jenny dancing along and whooping it up as Giuliani warbled one last time. Deadline had noted that Robin and Ken returned to the set after initially leaving, so it’s possible that Ken’s walkout was shown out of order, and that Robin had also temporarily fled during Rudy’s goodbye song.

Ken wasn’t the only person dismayed by Fox’s decision to allow Giuliani on The Masked Singer. While, interestingly, the show didn’t even announce this week’s reveal on Twitter or on its official YouTube channel – as it usually does – many viewers took to social media to protest this questionable casting.

So, with that elephant (or Jack in the Box, as it were) now out of the room, Season 7 can continue with Group C’s more lovable celebrity cosplayers: the Prince, Baby Mammoth, Queen Cobra, and Space Bunny. But can the show rebound from this week’s backlash, or – to employ another animal idiom – has it jumped the shark? We’ll soon find out, I suppose. In the meantime, let’s look at the rest of this week’s performances, and hope these celebrities turn out to be less loathed.

The Prince (Team Good), “The Cup of Life”

This caped, crowned frog reminded me of Season 2’s the Leopard with his regal gait, as he made a processional grand entrance to the stage and bilingually belted Ricky Martin’s stadium anthem. But the way he shook his Martin-esque bon-bon gave me boy-band vibes. Robin loved his showmanship, which Nick said had the in-studio spectators “leaping out of their seats.”

Clues: We saw Mars, a doorknocker-sized diamond ring, the price tag $ 20.06, and a video message from his pal Jamie Lee Curtis. He also said he was “happy to be back on a team” (which might support my boy-band theory) and has “performed in front of many people before.”

My guess: I think this could be Nick Jonas. The Mars mention could be a reference to his Spaceman album only; the diamond ring to his high-profile engagement to Priyanka Chopra Jonas; and the price tag to the year 2006, which is when the first Jonas Brothers album came out. Nick also starred in Fox’s Scream Queens with Jamie Lee Curtis and is able to sing in Spanish. I am not sure if a pop superstar like Nick would even do a show like this… but then again, I never thought I’d see Rudy friggin ‘Giuliani on The Masked Singer either, so anything’s possible.

She had the voice of an older woman – Robin called it “seasoned” – which lent itself well to this Patsy Cline classic. I am not sure if this precious pachyderm is a professional singer, but she could, or shouldnt, be a comedienne. Her bizarre poop jokes provided just the moment of levity this weird episode needed.

Clues: We saw a silver medal (plus a second similar verbal clue, when she said she’s “gotten lots of silver”), a cheer megaphone, a matchbook with one match, and several mentions of “ice.”

My guess: The judges’ guesses were all over the place, and this truly could be anyone. Tonya Harding seems like a good guess as any. The matchbook could be a reference to Tonya’s participation in celebrity boxing matches (which, come to think of it, makes her seem like just the sort of person who’d sign up to be on The Masked Singer). I need a little more time – and a bunch more clues – to figure this one out.

This scaly singer had a very familiar, iconic soul-diva voice, almost Patti LaBelle-esque. (But Patti was already on this show as the Flower, so it’s not her.) Nicole called her the “real deal” and “a professional.” This performance was good as hell, indeed.

Clues: We saw sacks of money, a space rocket, pirates, coffee, a Batman logo, a photo of Bradley Cooper, “1990”… and at one point two cobras, and then six, indicating that she might have gotten her start in a duo or group (possibly in the ’90s). She declared she was ready to “attack” and get some “action,” which seemed like keywords.

My guess: The Bradley Cooper clue threw me off at first, because obviously this isn’t his A Star Is Born co-star, Lady Gaga. (I thought for a minute it might be drag queen Willam, who had a bit part in that movie and actually can sing, but the voice doesn’t match.) But I’m going to go with funky diva Terry Ellis of En Vogue. In Vogue’s first album came out in 1990, and in 2006 they released a single called “Rocket.” Also, Terry recorded the theme song to the sitcom Hangin ‘With Mr. Cooperand she even had a role in Batman Forever. Of all my guesses on this bizarre and confusing episode, this is the one I feel even slightly confident about.

Space Bunny, “Jump in the Line”

Nicole told this hippity-hoppity performer, “You have an amazing voice! You didn’t miss a beat up there! ” Robin loved this singer’s island flavor and thought this might be a famous reggae star, but the Bunny’s onstage moves seemed like that of a pro athlete.

Clues: We saw basketballs and a shaggy dog, and this “trailblazer” said, “I shoot for the moon in everything I do.” His personality was a ton of fun – again, bringing much-needed levity to the proceedings.

My guess: Could this be Shaquille O’Neal? I am not sure if Shaq can sing this well, but remember, he did have a short-lived music career. “Shoot for the moon” could be a Space Jam reference, plus he was in the movie Show Dogs. (Hey, I don’t know… I think Rudy reveal through me off my game tonight.)