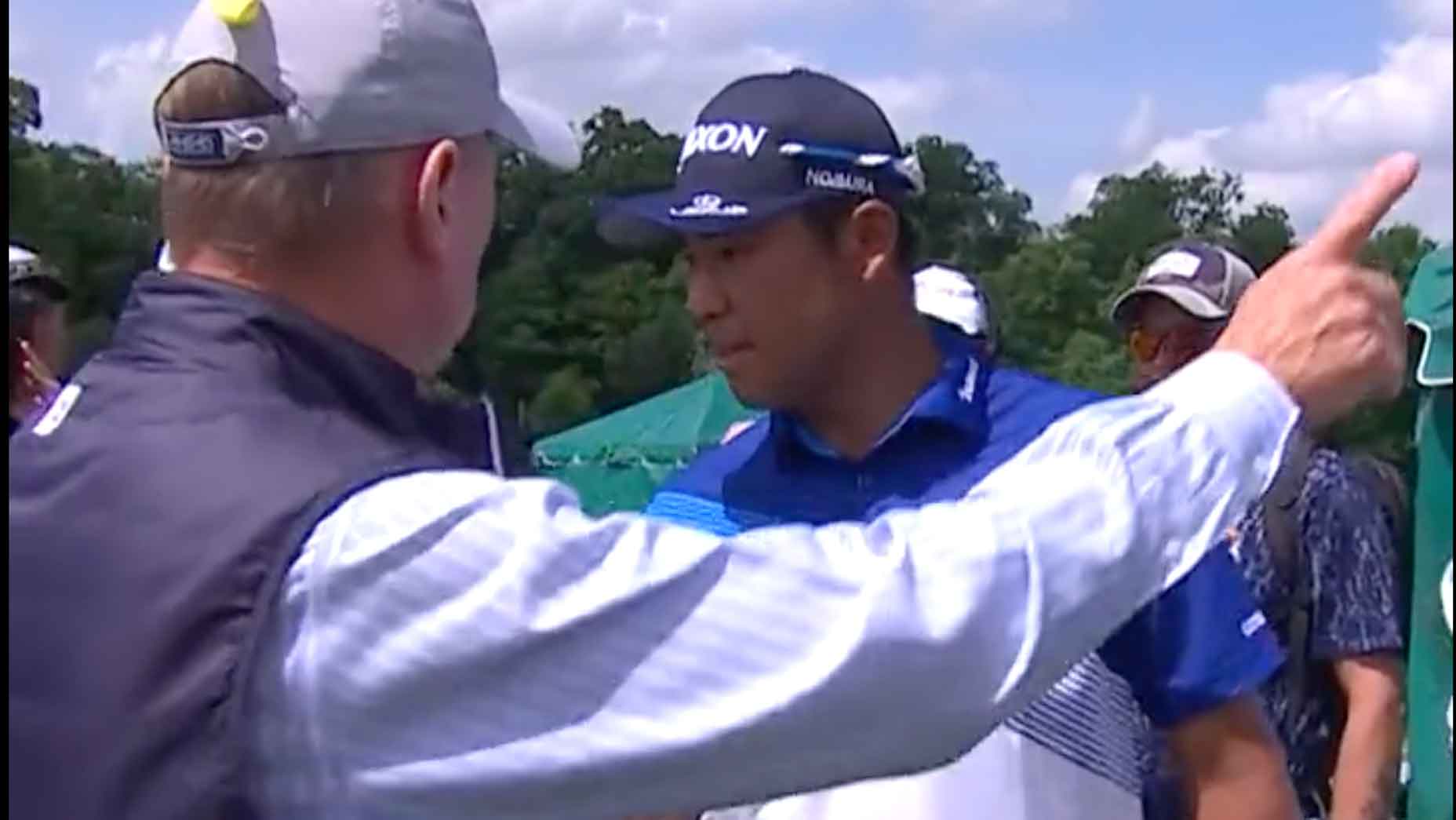 Hideki Matsuyama and Steve Rintoul on Thursday on the 10th tee box at Muirfield Village.

A white substance? Online pictures? An unknown informant? Some detective work? While this is a story of a golf rules infraction, you may also think it reads a little like a mystery novel.

In the end, it disqualified Hideki Matsuyama from Thursday’s first round of the Memorial. Last year Masters champ had the substance on the face of his 3-wood, he hit his first shot at Muirfield Village with it, and that meant the DQ, under rule 4.1a (3). But how rules officials got from opening tee shot to ejecting Matsuyama on the 10th hole required some sleuthing.

In a press conference with reporters midway through the round, Steve Rintoul, a PGA Tour senior tournament director, said that a member of his committee had been sent pictures of the club and was asked whether they had seen it. The pictures, Rintoul said, were from a website – Golfwrx.com posted pictures of the club earlier this week – but Rintoul would not reveal who alerted the committee member when twice asked.

“Another person in the world of golf,” he first said. “We don’t need to get into that.”

“Another person in the golf industry,” Rintoul said when asked again.

“You’re not willing…” a reporter started.

“I don’t think it’s important here,” Rintoul said. “It would have come across sooner or later. It was going to be on camera this afternoon. ”

Rintoul said the message was received when Matsuyama and playing partners Rory McIlroy and Patrick Reed were on the first green, and he met Matsyama on the fifth tee. There, after Matsuyama told Rintoul that he had used the 3-wood, Rintoul took pictures of it and rubbed his fingernail across the substance, then took his evidence back to rules officials and told Matsuyama to keep playing.

In question was a white substance outlined in a circle on the club face. Rintoul described its texture as “White Out,” and rules officials determined that it was enough to be a violation of rule 4.1a (3), which Rintoul said reads: “A substance or any treatment cannot be applied to the face of a club which could influence the flight of the ball, the spin, the loft or anything on the ball, how the ball performs. ”

The penalty is disqualification, and Matsuyama was told while he and his group were making the turn. Matsuyama, his caddy, Shota Hayafuji, and his interpreter, Bob Turner, talked with Rintoul, then Matsuyama shook hands with McIlroy and Reed, and he walked off.

“I think after we talked about it in the fifth fairway, I’m not going to say he was expecting – it wasn’t as much a surprise as it would have been if it had been unknown,” Rintoul said. “We told him we were looking at this; there was a problem with the stuff on the face. But our committee wanted to give Hideki all the due that he was deserved while we ascertained whether this club was nonconforming or not. ”

So why, then, was the substance used? While Matsuyama did not talk to reporters afterward, Rintoul said he was told that it was applied by Matsuyama’s gear person to help with alignment – and that he had done it previously to Matsuyama’s driver, stopped doing so but believed the substance was allowed on other clubs. .

A reporter then asked: “Is it a fair inference here to suggest that he’s been applying this to his clubs for a period of time?”

“No, I don’t think so,” Rintoul said. “I think we would have learned about it. He’s on camera all the time. He steps on camera all the time. I think this was fresh this week. It’s a relatively new 3-wood, it looked like. He was looking for a place to make sure he had the ball centered in his face. They just went about it with like a paper, whiteout brush, and there it was. ”

Notably, according to Rintoul, you are allowed to have smaller markings on the club face – “like a Sharpie dot” – and that if the paint had been down in the grooves and in the bottom of the grooves where it’s not on the face , not making contact with the ball, again, no problem. ” Matsuyama would also have been allowed to continue either if the 3-wood had been just in his bag and not in play, or if the substance was removed before hitting it. (This clarification, GOLF’s Sean Zak reported, was made in April.)

On Golf Channel, though, Rintoul offered up some advice.

“Don’t put paint on the face of your clubs at home.”