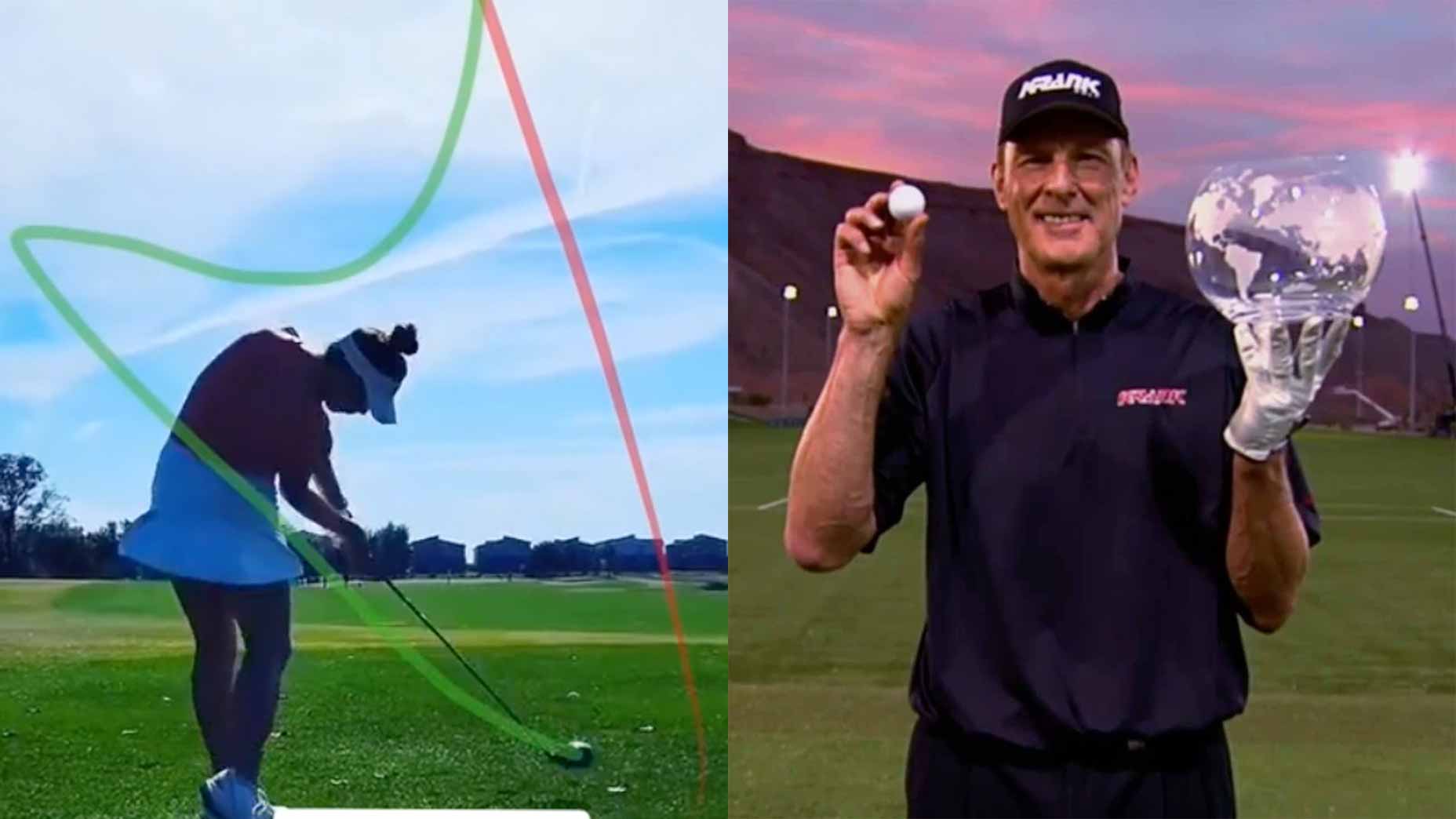 The Juju Swing is a bit unconventional – but it works.

The caption grabbed me immediately: How does the Juju Swing create so much power and lag?

I was deep in a TikTok binge, sifting through nonsense but hoping for content gold. Now, content gold had found me.

The algorithm had me in its crosshairs. Power is not a strength of my golf game, so if you promise more distance, you’ll have my attention. I kept watching.

Once the girl in the video started her swing, things got a little weird. She didn’t have your prototypical golf swing – it was much different. Her action was Matthew Wolff-esque – but even more exaggerated. She didn’t hinge her wrists on the way back and, near the top of her swing, the shaft pointed straight toward the sky. But after transition, she shallowed the shaft perfectly and generated a ton of clubhead speed. The ball exploded off the clubface with that sound.

I needed to know more.

A quick Google search led me to poke around the Juju Swing website. “The most repeatable move in golf,” it touted. There were pages for membership info and FAQs. Near the bottom, I found an email address for inquiring minds. I sent a note asking for a potential interview. Half an hour later I received a response.

“How does tomorrow afternoon work?”

The following day, I hopped on a call with Brad Peterson, the inventor of the Juju Swing. He was eccentric and enthusiastic; halfway through the call, he asked if we could FaceTime instead so he could better illustrate the Juju Swing fundamentals. Moments later, the exuberant man from TikTok appeared on my iPhone screen.

“I’ll send you a login so you can practice all this stuff if you want,” he told me midway through our interview-turned-pseudo-golf lesson.

His energy and earnestness were infectious. After 30 minutes on the phone, I had a handle on the method and several new swing thoughts to consider. I finally understood the philosophy behind Peterson’s unique swing – and how an unlikely character had proven its success.

Brad Peterson, now 41, has always been a solid player. In his early 20s, he carried a handicap index that hovered around scratch and even played in some mini-tour events. But his game was inconsistent, and scores in the 80s were as common as those in the 60s.

“I was just absolutely fed up with my golf swing,” he said.

So he set off in search of a solution.

Instead of trying to perfect the intricacies of a conventional golf swing, Peterson went in the opposite direction. Conventional wisdom was thrown out the window, and he struck gold when he started experimenting with a move that involved no wrist hinge on the way back.

“What happened was, when I transitioned, not only did the shaft shallow, but my wrists set for me,” he said. “I had this amazing lag and the club was dead square. I wasn’t doing anything to manipulate it and it was just returning back to impact square. ”

Peterson continued to practice his newfound technique, and his ball striking continued to improve. Each session he refined and tweaked his swing, and before long, he was grooving it. He called it the Load and Explode Swing.

“I was absolutely annihilating the ball,” he said. “And could move it both directions.”

A few weeks later, he went to a long-drive qualifier in Colorado. With the Load and Explode Swing in his arsenal, he became the first person to ever eclipse the 500-yard barrier in a long-drive event.

“It was a pretty wild scene,” he said. “Obviously it was at high altitude and everyone was hitting bombs that day, but it was really neat to be the first to go over 500 yards in a long drive event.”

With notoriety from his world record, Peterson took Load and Explode on the road. He began showcasing his unique swing as an entertainer at fundraisers, which led him to NBA Hall-of-Famer meeting Rick Barry.

“I did an event for the NBA Retired Players Association in Las Vegas,” Peterson said. “I was giving a demonstration at the event, and when it was over, Rick Barry approached me.”

Barry is among the most accomplished players in NBA history, but he is perhaps most notorious for his decision to shoot free throws underhanded, aka “Granny Style.” Unconventional methods have never deterred Barry, and Load and Explode fit his profile.

Although the event ended near midnight, Barry wasn’t done. “I want to go try that right now,” he told Peterson. In a city like Vegas, that was no problem.

“It’s usually a little bit of a learning process – at least a few hours to get comfortable with Step 1,” Peterson said. “Within two minutes he’s hitting 4-iron 250 at 60 years old.”

After an hour on the range, Peterson was convinced he could turn Barry into a Long Drive champion. Barry thought he was crazy. He’d worked hard on his game, whittling his handicap to low single-digits in his post-basketball days. But the game drove him mad and he knew how difficult incremental changes could be.

“I was getting so frustrated,” he said. “I’d go out and shoot 74 and be upset… I got to the point where I got so frustrated that I stopped playing.”

But Barry had found a kindred spirit in Peterson. Barry has never been afraid to go against the grain, and he was intrigued by this new and wacky swing.

And it turns out that Peterson was right.

After their first meeting in Vegas, Barry continued taking lessons from Peterson. He entered a qualifier for a Long Drive competition in Denver soon after. He successfully navigated the qualifier, competed in his first Long Drive event and became hooked.

Over the next decade, Barry dedicated his competitive fire to Long Drive. He’s won four world titles in his age group since, equipped with a clubhead speed hovering near 120 mph. His longest drive in competition went a whopping 377 yards.

“That was the first major validation of the Juju Swing,” Peterson said.

Still, the naysayers persisted. People called him crazy, insisting his method was off the mark. And in the days before social media, Peterson had no platform to preach his unorthodox theory.

Then, his daughter, Juju, (whom he adopted when he married her mother, Jessica) asked if he’d teach her how to swing like he did.

“I initially taught her traditional golf, because I didn’t want people to make fun of her like they did to me,” he said. “But after a year, she came to me and asked me to convert. That’s when everything changed. ”

Juju found immediate success with her father’s wacky swing, and Peterson changed the name from Load and Explode to the Juju Swing in her honor. She fully embraced the method four years ago and has compiled quite the resume since, highlighted by her multiple player of the year honors while competing on the regional circuits in north Texas.

“All these people around the world started getting interest because of Juju,” he said. “It’s kind of wild what’s happening.”

Peterson estimates his schedule is now booked out eight weeks in advance as he teaches junior golfers out of his in-home studio in Frisco, Texas. And, based on his TikTok videos, he counts several collegiate players as his pupils as well.

The Juju Swing’s rise in popularity coincides with a collection of unorthodox swings seeing success at the highest level. Matthew Wolff is the prime example, but others are seeing success with less-than-perfect swings as well, including World No. 1 Scottie Scheffler.

“As soon as [Wolff] won his first event, it was like another snowball, ”Peterson said.

Now, Peterson hopes to keep growing his brand – and bring his teachings to the masses.

“People are no longer scared of it – they’re intrigued,” he said. “I feel like I’m running a 20-year start-up, and we’re getting ready to blast off.”

Brad Peterson is based in Frisco, Texas. You can contact him on the Juju Swing website or via email at Brad@thejujuswing.com.

Zephyr Melton is an assistant editor for GOLF.com where he spends his days blogging, producing and editing. Prior to joining the team at GOLF.com, he attended the University of Texas followed by stops with Team USA, the Green Bay Packers and the PGA Tour. He assists on all things instruction and covers amateur and women’s golf.