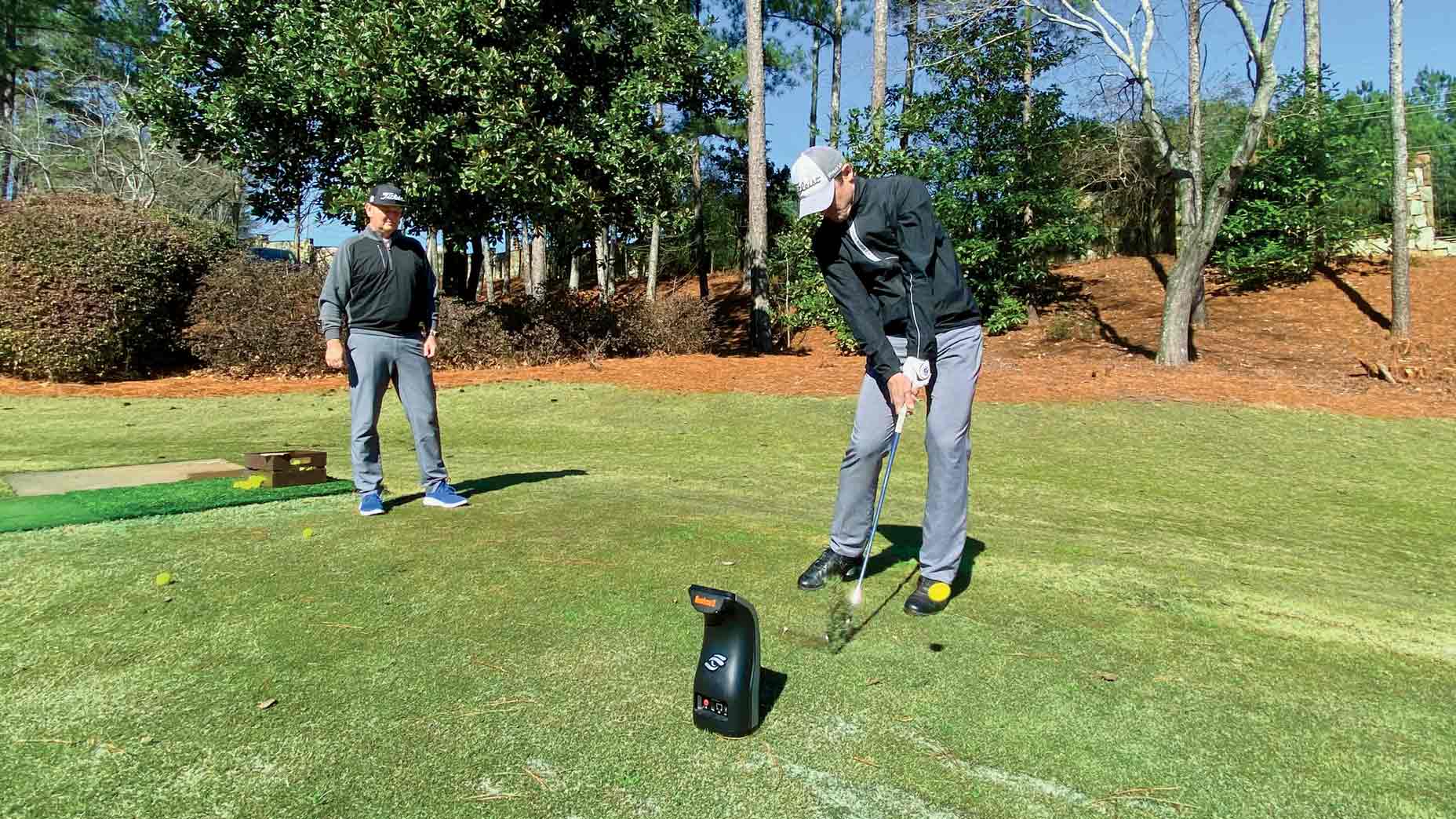 In the 1980s, my best friend’s parents had a mobile phone – aka “the bag phone” – that they lugged around in their car. We could look at it. We could touch it. We just couldn’t use it because making a call was so expensive. It was also heavy.

But, if you had the money, the bag phone allowed you to call while you were driving, and it certainly conveyed cachet.

Until recently, full-room golf simulators with big-dollar launch monitors reminded me of those 1980s bag phones. They were a definite statement of your golf bona fides and willingness to invest in your game. But they were expensive and, to function, required a room in your house with high ceilings. Nice perk if you could get it, but, realistically, these fancy setups were the provenance of touring pros and rich amateurs.

Now, a slew of portable and affordable launch monitors have penetrated the market at all different price levels. It’s a Golden Age for knowing how far you really hit the ball (goodbye memory of the 7-iron you launched 185 yards), critical feedback for game improvement and learning to better navigate a course.

Though they employ an array of different technologies, this new batch of launch monitors – some designed for indoor use, some for outdoor use, or both – aims to provide the same key metrics for players determined to understand where their ball is going. They are also coming in at prices that range from the equivalent of the cost of a new driver to the price tag for a buddies trip to Bandon Dunes.

But their primary selling point is that they don’t overwhelm golfers with data. TrackMan and Foresight have cornered the high-end market for outdoor and indoor launch monitors, respectively. Both start at around $ 20,000 for their most popular models, and, for that kind of dough, they generate a vast trove of data: spin rate, face angle, swing plane, dynamic loft, club speed, etc. That’s fantastic for professional golfers, instructors and hardcore amateurs, yet the market is trending toward making all golfers comfy with new tech.

More affordable monitors from Bushnell, Full Swing Golf, Rapsodo and SkyTrak offer fewer data points – at least right out of the box – but give highly accurate readings on the swing data they do measure. SwingBoxAI even uses artificial intelligence to create a three-dimensional picture of your swing.

Which one do you pick? Depends a lot on your wallet and your infatuation with numbers.

“Launch monitors are a fun category, but it can be a bit overwhelming,” says William Flood, product manager at Bushnell Golf, whose Launch Pro model starts at $ 2,999. “Do I want just a launch monitor, or do I want it to be the brains of my home simulator?”

Bushnell partnered with Foresight to create its personal monitor. Flood says the key was focusing the tech on spin, more so than ball speed or launch angle. “If I’m getting the wrong carry distance because the spin rates are wrong, that’s not helping the 15-handicap or the 5-handicap,” he says. Think of those driver fittings where too much spin causes the ball to balloon while not enough causes it to fall out of the sky.

Full Swing Golf is expanding on its reputation for building out complete, in-home systems – the ones that cost $ 40,000 and up – used by pros like Tiger Woods and Jon Rahm. The company’s personal launch monitor, the Full Swing KIT, starts at $ 3,999 and leans into numbers a bit more heavily.

“We are going after any golfer who takes their data seriously,” says Ryan O’Keefe, senior director of marketing at Full Swing Golf. “We have 16 data points after every swing and a built-in high-resolution camera.”

Meant for outdoor use, the Full Swing KIT, like several other similar products, works by placing it on the ground – behind the golfer, in this case, as opposed to in front of the golfer with other monitors – and syncing it with your smartphone .

Which one do you pick? Depends a lot on your wallet and your infatuation with numbers.

The people at Rapsodo are making a smart play too. Their MLM model, which starts at $ 499, is aiming to be the ultra-affordable launch monitor. The low price is about the “democratization of data and the ability to improve with data,” says Art Chou, Rapsodo’s general manager of North America. “The MLM really is more for the person who still wants the data but doesn’t want to invest that much.”

Less, of course, can be more. Top instructors say most golfers could benefit by using personal launch monitors for just two things: hitting the driver as far as possible and dialing in wedges from 120 yards in.

“A launch monitor is a tool,” says Joe Hallett, a GOLF Top 100 instructor who uses SkyTrak (around $ 2,000 and up) with students like LPGA star Stacy Lewis. “If amateurs know how to use it, it’s going to really improve these two ends of their game. Part of it is, are you getting the maximum distance out of your driver with a controlled golf swing? Anything but swinging harder makes you a better driver if the ball goes farther. If you want a fun day at the range, take your [clubhead] wrench and see what you can do with your driver and a launch monitor. ”

When it comes to wedges, Hallett says a launch monitor can teach players to hit very specific distances — with consistency. “You don’t have to hit your number all the time, but if you keep your shots within a range you’re going to hit within two to three yards every time.”

So simple. Now, if only they worked with putting.

Want Paul Sullivan’s advice on all things golf-related in personal finance? Send your questions to moneymailbag@golf.com.