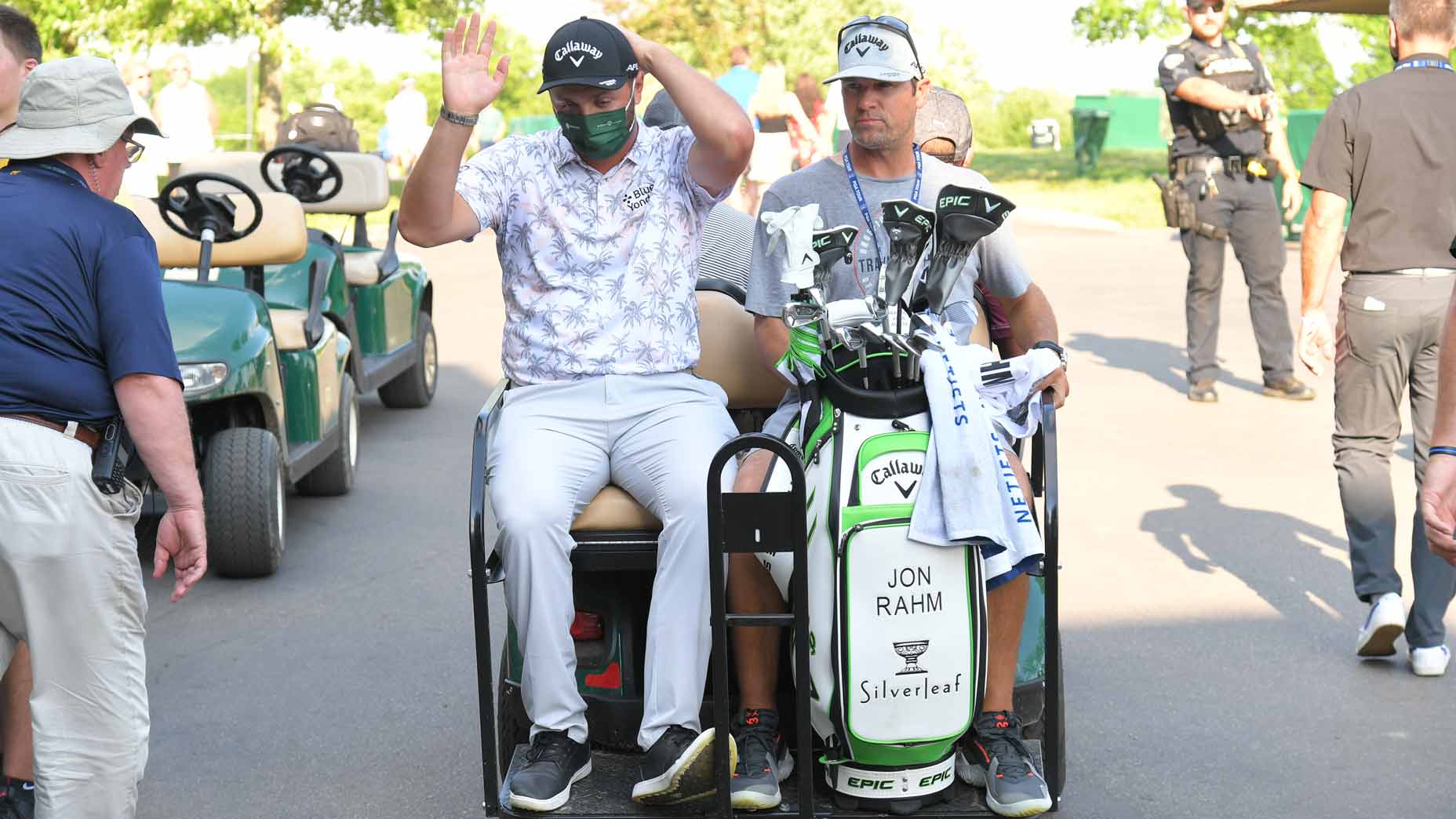 Jon Rahm was forced to WD after the third round of last year’s Memorial.

When he looks back at last year’s Memorial Tournament, Jon Rahm does have one bone to pick.

Rahm was referring to what went down after the third round at last year’s event. He finished Saturday with a six-shot lead but came off the course to some devastating news: He had tested positive for Covid-19 and would be forced to withdraw from the event. That WD sticks with him.

“I’ve never withdrawn from a tournament as a pro once I started, and I hate that,” he said. Then he made an appeal. “So at least the PGA Tour, if they are listening, just give me the Top 10, you know. I think I would have shot 85 [or better] that day. ”

As for the rest of it? Rahm blew past it pretty quickly. He even objected to one reporter referring to it as an emotional “low.”

“I mean, it wasn’t really a low, though,” he said. “Yes, I walked off the course, I was told I couldn’t play, and I was mad for about ten minutes, right. I allowed myself to be upset. But instantly my switched flipped and I called my wife and I made sure she was okay and my son was okay. ”

He and his caddie retreated to what he called a “little Covid hut” and followed Memorial tradition: they ordered milkshakes. Then they couldn’t help but laugh.

“I mean, the fact that that happened; that I had a six-shot lead and it’s gone, I can’t even play, right. I mean, the irony of it all kind of made us laugh. ”

At that moment, though, Rahm said he chose to think on the positive. He’d played well all season but now everything was finally clicking, all at once. That felt like a good sign for the rest of the year. Sure enough, Rahm won in his next start – which happened to be at the US Open.

“I was confident when I stepped up at Torrey that I could get it done, and that’s why I’m saying, it wasn’t really a ‘low,'” Rahm added.

He was comforted by the fact that his symptoms were mild and the knowledge that he hadn’t transmitted the illness to those around him.

“Obviously I consider myself extremely lucky, how everything came out. Nobody was severely ill, ”he said. “I’ve heard stories of people that get into the ICU and have effects afterwards and it takes them months to recover, and we didn’t have to deal with any of that. So in that sense I was extremely lucky. ”

Rahm’s US Open victory propelled him into the world No. 1 spot and kicked off an impressive run in which he finished T3 at the Open Championship, third at the Northern Trust, T9 at the BMW Championship and then finished second at the Tour Championship (tied for the lowest 72-hole score).

He cooled off slightly over the offseason, though that’s all relative; he hasn’t missed a cut in 2022, has three top-three finishes and won just two starts ago at the Mexico Open. But at the three biggest events on his calendar – the Players, the Masters and the PGA – he has finished T55, T27 and T48. That means Rahm, the 2020 Memorial champion, is coming into this week with his eyes set on another. And while a win wouldn’t technically be a three-peat, it would be a Covid-era accomplishment unlike any other. Rahm enters as the betting favorite at 11-1.

As for what he’d tell his former self as he was walking off that 18th green last Memorial, forced to WD?

“Nothing, really,” he said. “Well, I mean, I wouldn’t want to jinx myself, but I would tell myself in the second I got a little frustrated, ‘Don’t worry, you’re going to win the US Open.'”

Not a bad consolation prize.