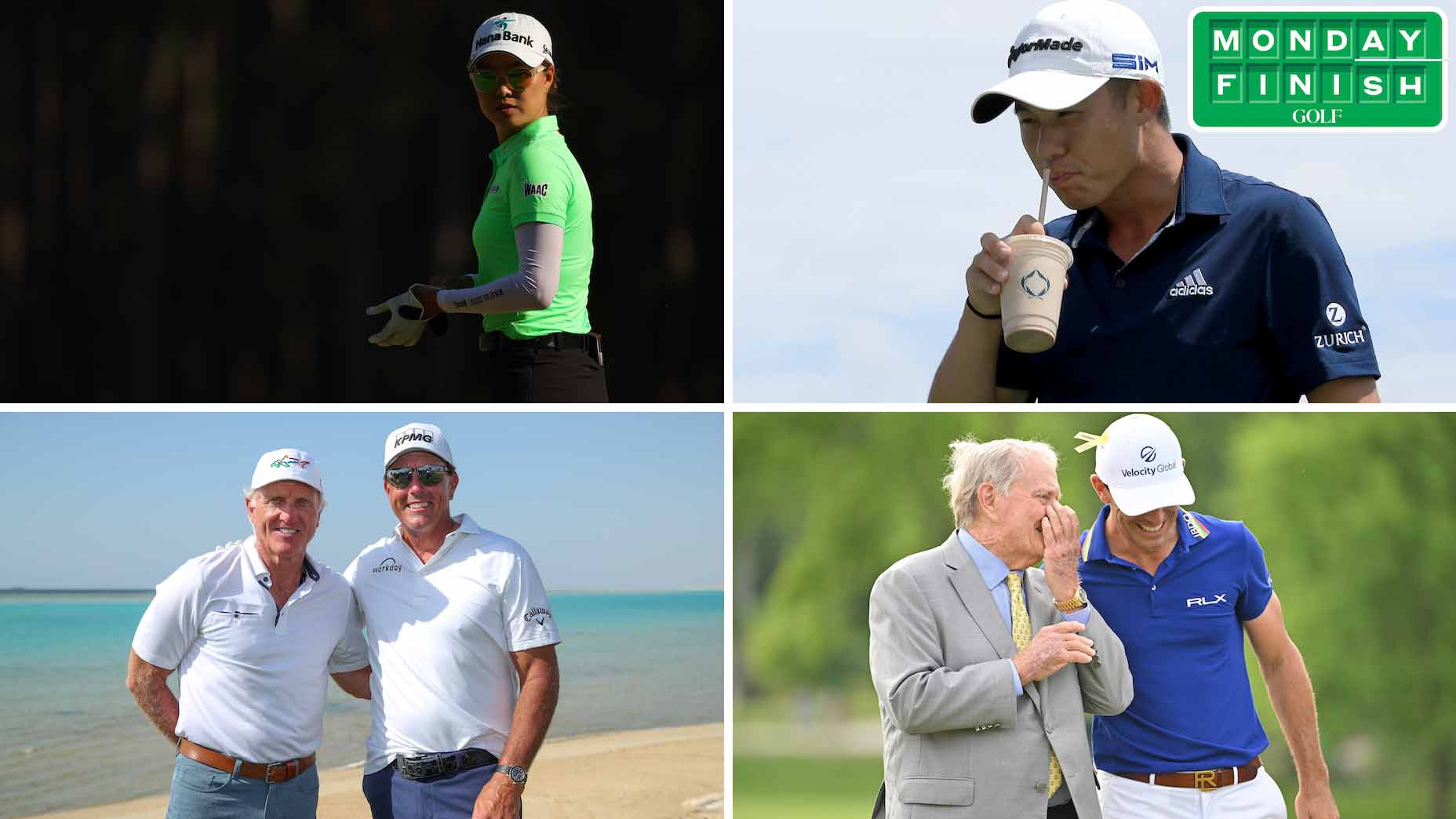 Welcome back to the Monday Finish, where there are some things money can’t buy – like these milkshake takes. Let’s get to it!

FIRST OFF THE TEE

Something you might have missed: Speaking truth to milkshake power.

To hear some pros talk about it, the main reason they tee it up at the Memorial each year is to pick up a post-round shake buckeye every day. Maybe two. I’ve had the distinct pleasure of covering and caddying the tournament and can confirm that the milkshake obsession isn’t overstated; pros and caddies and families absolutely house milkshakes all week long.

But this year, for the first time, there seemed to be a few pros set on pushing back against the narrative.

“I guess I don’t want to get in trouble here, but like – the milkshakes are good. I’ve had milkshakes that are just as good elsewhere, ”he said Rory McIlroy.

Folks, I have been to the inner sanctum. I have visited the Captain’s Grill and I have cracked the code. And I am happy to share with you that the secret to Muirfield Village’s milkshakes is… the fact that they’re made with ice cream and candy.

Seriously, let’s get past the mythmaking here. Yes, they use delicious ice cream. Yes, they seem to have the ratios on point. But the truth of the matter is that the Memorial milkshakes are delicious because all milkshakes are delicious. Big Milkshake has established this as the week where it’s socially acceptable to consume them in large quantities in the name of tradition. We all fall in line, one 1200-calorie beverage at a time.

I’m certainly not milkshake-shaming here. I believe that between Memorial Day and Labor Day people should consume ice cream at least once a day; that’s the natural order of things. But I’d like us to be honest about this particular tradition and just admit that it isn’t Muirfield Village that holds the secret – it’s us. The secret is within.

Who won the week?

This was the week that Minjee Lee officially arrived. Sure, she had established herself as one of the best golfers in the world. She’d gotten as high as No. 2 in the world in 2019. She’d notched significant victories as recently as her second-to-last start, when she won the Founders Cup. She’d even won her first major championship at last year’s Evian. But there’s no matching the US Women’s Open. The massive purse. The massive stage. The massive scrutiny. All seen in ridiculous HD (shoutout USGA and shoutout Peacock, who each seem to have mastered streaming).

On Saturday night, Lee – who held a three-shot lead – was asked about her plan for Sunday.

“I’m just going to try and make as many birdies as I can,” she said.

Good plan. Good execution. Lee made four birdies against four bogeys on Sunday in the spotlight. She looked distinctly cool while doing so, taking the wording on her Win At All Costs apparel very literally. Her terrific swing got its due; she’s arguably the best irons player on the LPGA and got the chance to prove it (though her red-hot putter really made the difference). While the post-game analysis seemed to focus on the fact that Lee’s final round was far from perfect, that ignored the fact that just two golfers in the entire field posted better final-round scores than her even-par 70. That’s good cookin ’ .

Your new world No. 11! Like Minjee Lee, Billy Horschel shot 13 under to win by four strokes. Like Lee, he closed it out on Sunday with a commanding even-par final round. Unlike Lee, his included a 50-foot bomb for eagle to slam the door at No. 15 on Sunday. Now? Horschel’s resume includes a WGC, a Playoffs win, a FedEx Cup win and, after Sunday, an Invitational win too. He’s one Players Championship short of holding all the PGA Tour cards. He’s No. 8 in the US team’s Presidents Cup standings.

“I knew starting off with a five-shot lead, I know if I lose it – I wasn’t going to say I’m going to choke. I’m very aware of what people say, whether it’s on social media or whether it’s in media, they’re going to question what I did. ”

In other words, Horschel was trying not to screw it up. He succeeded.

Moral victories all around.

That’s a million bucks for second place – a first in women’s golf history. Hell of a consolation prize.

Pereira, your near-winner at the PGA Championship, made a deuce on the par-5 seventh hole on Sunday. More importantly he finished T13, cementing the fact that Southern Hills doesn’t seem to haunt him and that he’s quietly one of the most consistent golfers on the planet, with 12 top-30 finishes in his last 15 starts.

Some pros who might have been on your Brookline radar showed they’re in fine form on a challenging golf course, including a sniper Patrick Cantlay (T3), major specialist Will Zalatoris (T5) and Hard Golf Expert Max Homawhose T5 has him to a career best of 23rd in the world. Jon Rahm (T10) also seems to be doing just fine, thank you very much.

LIV is actually happening, huh? Here’s what we know.

Dustin Johnson has officially arrived on property, signaling the beginning of the first LIV event outside of London. In other words: Yeah, we’re actually doing this.

If you read Johnson’s statement (released through his agent) plus Kevin Na‘s resignation from the PGA Tour you really get the sense that these guys are prepared to all-out leave the Tour. They’re talking about their time there in the past tense. Based off the cash values ​​being thrown around, maybe this shouldn’t come as any sort of surprise. Speaking of which

LIV CEO Greg Norman talks a big-time game, but he also has big-time financial backing, which makes some of the reported numbers – like $ 125 million for Johnson – believable. That’s particularly true in the context of the $ 2 billion investment Norman says he has secured for the coming LIV years. We’ll find out more about these numbers as time goes on, but one interesting nugget buried in this excellent Washington Post story on Norman has to do with their pursuit of Tiger Woods:

What exactly does “high nine digits” mean? I’ll let you parse that one out, but it sounds like a lot of money and it’s interesting and telling that Team Tiger turned it down.

It would be dishonest to suggest that LIV lacks any star power; Despite McIlroy’s fair critiques of its field strength, the fact that a new league has scored a number of big-name pros and a handful of established executives is pretty seismic. On Monday we learned more about the broadcast team, which includes longtime Golf Channel voice Jerry Foltz, former Asian Tour pro Dom Bouletlong-drive champ and influencer Troy Mullins and headlined by Premier League (and Ted Lasso!) voice Arlo White.

… Seem to still be available. Offering free straightaway tickets would have been a compelling strategy. Trying to give them away just days before the event suggests an over-supply.

Last week, we at the Monday Finish confirmed that Phil Mickelson had been practicing with coach and caddy (that’s his brother Tim) in the sort of way that one would only when preparing for an event. And until he had officially committed to the LIV field, we were reluctant to speculate as to his intentions. But in real time, just after I initially pressed “publish” on this story, Lefty went live with a news drop of his own: He’s headed to Centurion for the first event of the LIV Series.

Mickelson’s path to the first LIV event has been fraught, to say the least. There was his diatribe against the PGA Tour. His behind-the-scenes recruiting and deal-making. His interview with Alan Shipnuck. His disappearance from the public eye. His absence from the Masters and his PGA Championship title defense. Now that he’s in the field it feels like it was always a foregone conclusion. I’ll have more to say about this as I digest it, but I’ll offer this: I hope the first paragraph of his statement is true, for the sake of Mickelson and those around him. As to the rest of it: Money talks!

It’s peak summer in Seattle right now, at least according to the sunset. There’s a nine-holer down the street, Interbay Golf Center, which now offers 8 pm tee times, and there’s no doubt you’ll get in your complete round. Dream season, gang.

Three things to watch this week.

Tired of all this money talk? The Curtis Cup is headed to Merion, where you can take in the glory of a top-tier golf course as the backdrop for terrific team competition.

After cancellations two years in a row, the RBC Canadian Open returns to Ontario with a strong field in tow. Can McIlroy defend his 2019 title three years later? Who else is getting hot before Brookline?

What will Centurion look like this week? Who will watch? Will you?

We’ll see you next week.