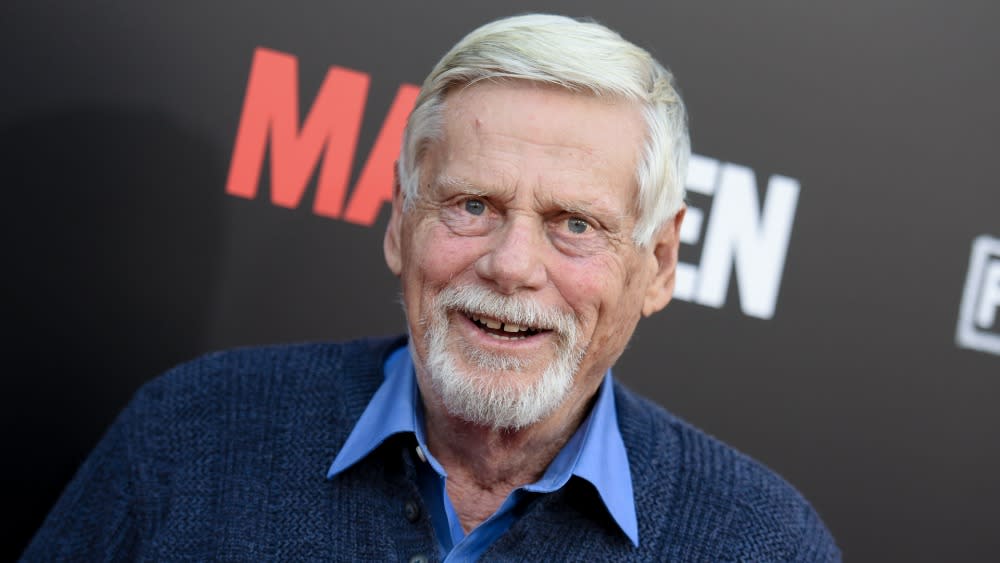 Robert Morse, who translated Broadway stardom into a film career in the 1960s, then re-emerged decades later as one of the stars of “Mad Men,” has died. He was 90.

Writer-producer Larry Karaszewski, who serves as a VP on the board of governors for the Academy of Motion Picture Arts and Sciences, tweeted news of Morse’s death on Thursday.

“My good pal Bobby Morse has passed away at age 90,” he wrote. “A huge talent and a beautiful spirit. Sending love to his son Charlie & daughter Allyn. Had so much fun hanging with Bobby over the years – filming People v OJ & hosting so many screenings (How To Succeed, Loved One, That’s Life). ”

Morse was Emmy nominated five times for playing the sage Bertram Cooper, the senior partner at the advertising firm that was the focus of AMC’s prestigious series “Mad Men,” from 2007 to 2015. In 2010, he shared the SAG Award that “Mad Men ”Won for outstanding performance by an ensemble in a drama series.

The eccentric Bert Cooper was known for his bow ties and his collection of Japanese art and architecture; while at times he seemed indifferent to the business affairs at Sterling Cooper, he could be crafty and manipulative when necessary. Cooper died the night of the first moon landing – and that 2014 episode afforded Morse the opportunity to show off his singing and dancing skills in a fantasy number, imagined by Jon Hamm’s Don Draper, to the tune of “The Best Things in Life Are Free . ”

“The opportunity to shine in the spotlight that Matt Weiner gave me – it was an absolute love letter. Christmas and New Year’s, all rolled into one, ”Morse told the New York Times.

Morse also won an Emmy in 1993 for a PBS “American Playhouse” adaptation of Morse’s one-man show “Tru,” about Truman Capote.

Morse, known for his impish, gap-toothed grin, became a Broadway star in the musical comedy “How to Succeed in Business Without Really Trying,” for which he won his first Tony, as best actor in a musical, in 1962. The enormous hit ran for more than 1,400 performances and was adapted for the big screen in a 1967 film in which Morse reprised his starring role of J. Pierpont Finch.

Reviewing the movie, Variety said: “Plot concerns window-washer Morse who, by superior instinct for advancement and survival, becomes a top exec in (Rudy) Vallee’s company in a matter of days. He becomes so big that former well-wishers plot his downfall. The pixie-like Morse is excellent, with both voice and facial expressions right on target all the time. ” Morse not only sang but danced in the musical; later, in reviewing the actor’s performance in “Tru,” Frank Rich of the New York Times said, “Mr. Morse kicks a loose-limbed leg as high and friskily as he did when joining Bob Fosse’s hoedown for the ‘Brotherhood of Man’ finale in ‘How to Succeed.’ ”

The actor won his second Tony for the one-man show “Tru,” in which he played Truman Capote, appearing on Broadway for 297 performances in 1989-1990. Makeup man Kevin Haney, whose credits include the movies “Altered States” and “Wolfen,” turned Morse into the bloated mass that Capote became before he died in 1984.

“With his mad shopping-bag woman’s cackle and darting lounge lizard’s tongue, Mr. Morse so eerily simulates the public Capote of the pathetic waning years that he could be a robot Capote,” wrote Frank Rich. “One is glad to have met up with this actor again, is impressed by his command of his technique and his audience, and is moved by the courage that has allowed him to return to a Broadway stage in so unlikely a vehicle.”

Morse appeared in a number of other movies in the 1960s, including Tony Richardson’s satire of the funeral industry “The Loved One” (1965), also starring Jonathan Winters. Variety said: “Robert Morse as the poet who falls in love with the lady cosmetician (later promoted to embalmer) while making arrangements for his uncle’s interment, plays it light and airy, like a soul apart.”

In 1967, in addition to the “How to Succeed” adaptation, Morse starred with Walter Matthau in the comedy “A Guide for the Married Man,” in which Morse’s character tries to convince Matthau’s married man to keep an affair secret from his wife. and his points are illustrated in skits that featured a large number of celebrities.

(According to a 2014 article in Playbill, “How to Succeed in Business Without Really Trying” and “A Guide for the Married Man” served as inspirations for Matthew Weiner when he created “Mad Men.”)

Morse starred opposite Doris Day in the 1968 film comedy “Where Were You When the Lights Went Out?”

In 1968-69 Morse starred with EJ Peaker in the innovative ABC musical comedy series “That’s Life,” in which the story of how a young couple met, fell in love, and married was told through a series of monologues, sketches, and song and dance routines. He earned his first Emmy nomination for his work on the series.

The actor starred in the Disney comedy “The Boatniks” (1970), and made a few guest appearances on series including “Love, American Style” and “Fantasy Island” during the 1970s; in the 1980s he performed on shows including “The Dukes of Hazzard” and “Murder, She Wrote.”

Morse was among the performers on Marlo Thomas’ celebrated “Free to Be… You and Me” children’s album in 1972.

In 1987 he starred in a Cannon Films version of “The Emperor’s New Clothes,” with Sid Caesar as the Emperor and Morse playing the Tailor.

He was featured in ABC’s 1993 series “Wild Palms” and was a regular on Steven Bochco’s brief-running CBS hospital drama “City of Angels,” starring Blair Underwood, in 2000.

Morse was born in Newton, Massachusetts. He served in the US Navy during the Korean War. A high school drama teacher inspired him to become an actor, and after graduating he headed to New York City’s prestigious Neighborhood Playhouse, where his older brother, Richard, was already studying acting. He also studied with Lee Strasberg. He made his stage debut in 1949 production of “Our Town” in New Hampshire.

He made his Broadway debut in 1955 in “The Matchmaker,” the Thornton Wilder play that would serve as the basis for the musical “Hello, Dolly!” (Ruth Gordon starred as Mrs. Dolly Gallagher Levi); he played Barnaby Tucker. After appearing in an uncredited role in the 1956 film “The Proud and Profane,” starring William Holden and Deborah Kerr, the young actor made his credited big-screen debut two years later in the film adaptation of “The Matchmaker,” starring Shirley Booth. . The New York Times said, “Robert Morse does a fine stint in re-creating his stage role as his wide-eyed, fellow adventurer.”

After “How to Succeed in Business Without Really Trying,” which ran from 1961-65, Morse starred in the original musical comedy “Sugar,” based on the classic Billy Wilder comedy “Some Like It Hot.” It ran for 505 performances in 1972-1973. In 1976, he appeared in the musical “So Long, 174th Street,” whose source material was a book by Carl Reiner.

Morse didn’t return to Broadway until he appeared in “Tru” in 1989-90, and he didn’t appear on the Rialto again after that. In 1995, however, he starred in a Canadian production of “Show Boat”; in 2002 he played the Wizard in the San Francisco run of the musical “Wicked” but was replaced by Joel Gray when it opened on Broadway; in 2014, he appeared onstage at Vassar’s Powerhouse Theater as part of the cast of Christopher Gattelli’s dance ensemble piece “In Your Arms.”

Morse was twice married, the first time to “West Side Story” actress Carole D’Andrea from 1961 until their divorce in 1981.

He is survived by second wife Elizabeth Roberts, whom he married in 1989; three daughters by D’Andrea, Andrea Doven, Hilary Morse and Robin Morse, all actresses; and two children by Roberts, son Charles Morse and daughter Allyn Morse.