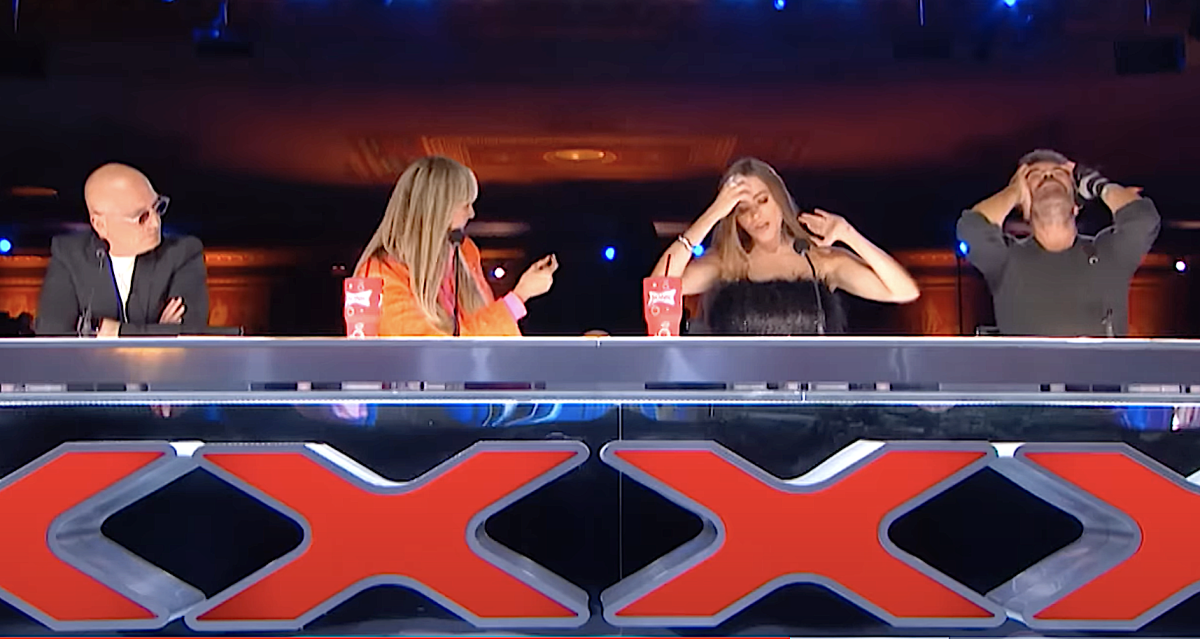 America’s Got Talent returned Tuesday for its 17th season, with a noticeable absence of daredevil contestants – most likely a retooling format, after AGT veteran Jonathan Goodwin was paralyzed during a stunt-gone-wrong on this past summer’s now-canceled spinoff show America’s Got Talent: Extreme. Really, the Season 17 premiere’s only danger act was an Austrian guy named Joe, who set himself on fire while warbling the Bangles’ “Eternal Flame” for his wife. But the flame was apparently not eternal, as Joe was rejected by the judges before fire-extinguisher-brandishing stagehands had even finished snuffing out his blaze – and his chances.

On Tuesday, there was another AGT reject – podcast sound engineer by day, emo singer-songwriter and granulated cheese enthusiast by night, Ben Lapidus – whose hopes had also seemingly been extinguished. But then, Ben somehow managed to transform the judging panel’s four red X’s into three yeses, and he advanced to the next round against all odds. After 16 years on the air, this was a historic one AGT first. “I am told from producers that we don’t recall anything like this happening previously,” a show source told Yahoo Entertainment. “There have never been four X’s given, with three of them then being reversed and turned into a yes.”

When 29-year-old Ben first showed up toting an acoustic guitar, telling the sad story of suddenly losing his father at age 6 and turning to the “lifeline” of music for comfort, viewers were no doubt expecting some sort of sensitive coffeehouse troubadour. “I’m going to be doing an original song, and I hope it resonates with the judges,” he earnestly said AGT host Terry Crews. However, Ben’s bizarre (but definitely original!) Song was actually more suited to an Italian bistro than a coffeehouse, as he sang of his internal moral struggle when trying to request extra Parmesan cheese on his pasta without seeming too needy or greedy.

“I always want more Parmesan, but I’m embarrassed,” Ben belted, becoming increasingly desperate and agitated as the tune went on. “Why are they so stingy? / Is there a shortage of Parmesan? / Is it really that expensive? / I just want more cheese, is that so wrong?”

While Ben’s spicy protest song against Italian restaurant servers and “Big Parma” seemed to resonate with European judge Heidi Klum, her co-stars quickly became agitated themselves, with Simon Cowell being the first to pound his red X button. (“I hate bloody Parmesan. It’s disgusting,” Simon later grumbled.) Howie Mandel and Sofia Vergara followed Simon’s lead, and once Ben got into full screamo mode and really let it rip, Heidi also appeared to no longer connect to Ben’s zesty message. , so she too buzzed him.

But Heidi is a woman of the people. So, when the apparently quite lactose-tolerant live audience started enthusiastically chanting, “Parmesan, Parmesan, Parmesan,” she made the executive decision that Ben didn’t just deserve another dusting of Parmesan on his penne, but also another chance at AGT glory. “I will not remain silent, I will not give in / I will die before I let Big Parma win,” a not-at-all-embarrassed Ben howled, after he was granted a do-over audition. “People want more Parmesan! Give it to them! ”

“You know what? I want to kill you right now, because I can’t get that [chorus] out of my brain, ”Simon blurted. “Take the X away. I am giving you a yes. ” Howie remained firm, so his X remained as bright and red as a bowl of fresh marinara, but Heidi and Sofia also changed their minds – and changed their no’s to yeses. “It’s the power of the people!” Heidi, as the studio audience continued their “Parmesan” chant. “Sometimes, you’ve gotta listen to the public,” Simon explained. A triumphant Ben and Terry then celebrated this surprising, historic, last-minute victory backstage with a gooey Italian meal, Ben’s need for extra cheese at long last satiated.

While it should be noted that Simon is a savvy A&R man who’s been instrumental in the pop careers of international reality stars like Kelly Clarkson, Carrie Underwood, One Direction, Susan Boyle, Fifth Harmony, Leona Lewis, Little Mix, and Jackie Evancho, it remains to be seen if his pop instincts, and Heidi’s pay off with Ben. Even though Heidi and Simon pressured Sofia into reversing her decision, she still seemed unconvinced, telling them, “You guys are crazy. … It was a horrific song, and now we are going to have to hear this guy again! ” I don’t know if Ben has what it takes to be more than a cheesy one-hit-wonder on America’s Got Talentbut he might have a lucrative endorsement deal with Kraft or Progresso in his future.

And of course, there were the requisite goat yoga and jump-roping poodle acts, and online spoilers indicate that we might see a How act on an upcoming AGT episode! So, tune in next Tuesday, as America’s literally and figuratively cheesiest talent search continues.