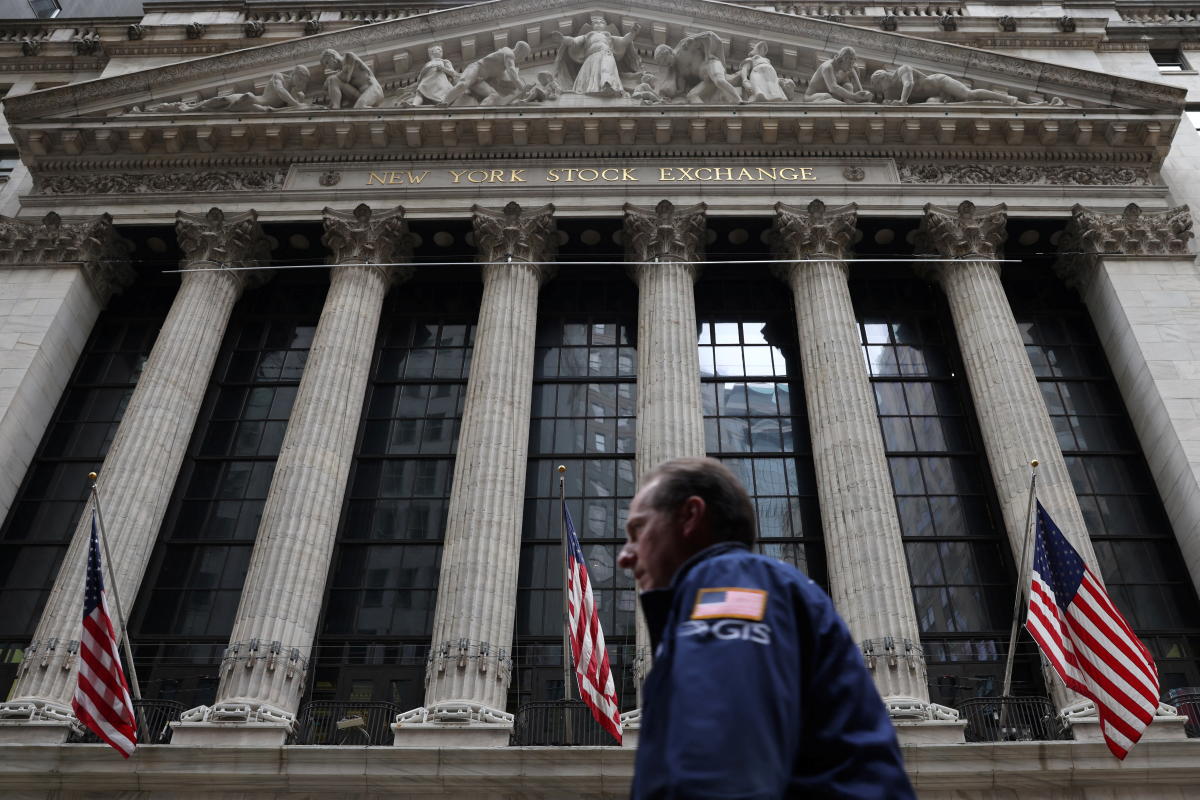 After rallying to start the trading session, led by a 1% advance from the Nasdaq, all three major indexes turned negative about 80 minutes into the trading day.

Data from the Institute for Supply Management showed the US manufacturing sector grew faster-than-expected in May, another signal that fears of an imminent downturn in the US economy may be overblown.

Manufacturing data was quickly followed by headlines from Dimon, who told Bernstein’s Strategic Decisions Conference the US economy is facing a “hurricane” as the Federal Reserve continues its process of normalizing interest rates.

The April report on job openings from the BLS also showed a decline in the number of job openings, a data point the Federal Reserve is likely to view positively as it works to cool the labor market.

An upbeat earnings report from Salesforce (CRM) late Tuesday gave investor sentiment a boost early Wednesday after the software company raised its profit forecast and said it did not see any significant impact on operations from macroeconomic uncertainty.

The outlook comes in contrast to some downbeat quarterly results from some corporate peers that signaled struggles with rising costs and supply chain imbalances ahead. Shares of Salesforce surged as much as 12% at the open.

“We’re just not seeing material impact on the broader economic world that all of you are in,” Salesforce Chief Executive Officer Marc Benioff said in an earnings call.

In a meeting with Federal Reserve Chair Jerome Powell on Tuesday, President Joe Biden discussed inflation – a “top economic priority” of his administration – while shifting responsibility to the central bank and emphasizing its independence. The meeting followed a Wall Street Journal op-ed by Biden underscoring his focus on taming soaring prices.

“At the end of the day, inflation is the biggest political challenge that’s out there,” John Hancock Investment Management Co-Chief Investment Strategist Matthew Miskin told Yahoo Finance Live on Tuesday. “To bring down inflation, [the Fed has] got to bring down the economy. ”

June also marks the beginning of the Federal Reserve process to begin shrinking its $ 8.9 trillion balance sheet. The central bank is also expected to raise interest rates by another 50 basis points when officials meet for their next policy-setting meeting later this month.

Wednesday’s early moves follow an eventful May on Wall Street marked by worries of a recession, decades-high inflation levels and rising interest rates.

Despite a month of sharp gyrations in equity markets, the S&P 500 churned out a small gain of less than 1% – even after seven consecutive weeks of losses briefly dragged the index into bear market territory. The Dow Jones Industrial Average also closed slightly up for May, while the Nasdaq Composite deepened losses for the month amid a continued rotation out of technology stocks.

In the past decade, the month of June has returned an average of 1.4%, ranking it the fourth best month of the year, according to data from LPL Financial. Over the past 20 years, however, the month has been weak, with only September worse for stocks.

“June has something for everyone, as it is no doubt a very weak month historically, but the past decade it has been strong,” LPL Financial Chief Market Strategist Ryan Detrick said in a note. “Still, after the big bounce in late May, we wouldn’t be surprised at all if this recent strength continued into a potential summer rally.”

Bespoke Investment Group pointed out in a note Tuesday that summer months have historically seen weaker stock market returns relative to winter and early spring. According to data from the firm, the Dow Jones Industrial Average has averaged a gain of 0.47% in June over the last century, but has been a “coin flip” for positive returns during the month, logging gains only 52% of the time.

10:46 am ET: Jamie Dimon says ‘hurricane’ coming for the US economy

JPMorgan (JPM) CEO Jamie Dimon is making waves on Wednesday with his comments at an investor conference.

Speaking at Bernstein’s Strategic Decisions Conference, Dimon said the US economy is facing a “hurricane” as the Federal Reserve continues its process of normalizing interest rates. Dimon said he’d previously referred to impending challenges facing the economy as “storm clouds.”

“Right now, it’s kind of sunny, things are doing fine,” Dimon told the conference, according to a transcript from S&P Capital IQ. “Everyone thinks the Fed can handle this. That hurricane is right out there down the road, coming our way. We just don’t know if it’s a minor one or Superstorm Sandy … or Andrew or something like that. And you got to brace yourself. “

Dimon added that he thinks the banking industry is in great shape, as are consumers sitting on over $ 2 trillion in savings.

“Jobs are plentiful, wages are going up, consumers are spending,” Dimon said. “[The] lower income folks, not quite as much as before, but everybody else, it looks like they have $ 2 trillion more savings … I don’t think that’s going to stop … spending [in] 6 or 9 months. And so that to me is the bright clouds out there. “

10:20 am ET: Manufacturing activity remains resilient in May

Two readings on the US manufacturing sector in May showed continued growth amid investor concerns of an impending economic slowdown.

The Institute for Supply Management’s Manufacturing PMI for May hit 56.1, up from 55.4 in April and marking the 24th straight month of growth. S&P Global’s US Manufacturing PMI hit 57 in May, down from 59.2 in April.

For both reports, any reading over 50 indicates expansion in the sector while readings below 50 indicate contraction.

The data wasn’t all sunny, however, with the ISM’s employment index showing an unexpected decline last month. Additionally, S&P’s report showed business confidence falling to the lowest level since October 2020.

“A solid expansion of manufacturing output in May should help drive an increase in GDP during the second quarter, with production growth running well above the average seen over the past decade,” said Chris Williamson, chief business economist at S&P Global Market Intelligence. “However, the rate of growth has slowed as producers report ongoing issues with supply chain delays and labor shortages, as well as slower demand growth.”

Commenting on ISM’s latest report, Tim Fiore, chair of the ISM’s Manufacturing Business Survey Committee, said, “The US manufacturing sector remains in a demand-driven, supply chain-constrained environment. Despite the Employment Index contracting in May, companies improved their progress on addressing moderate-term labor shortages at all thirds of the supply chain. “

According to the BLS, the biggest decreases by industry were in health care and social work, retail, and food services, which all saw openings drop by more than 100,000 from March to April.

Wednesday’s data suggests a potential step towards re-balancing this market.

9:33 am ET: Wall Street kicks off June with gains after closing out volatile month

Here’s where the major indexes were trading at the start of Wednesday’s session:

7:22 am ET: Futures struggle for direction as investors gear up for June trading

Here were the main moves in early trading Wednesday after Wall Street closed out a volatile month: