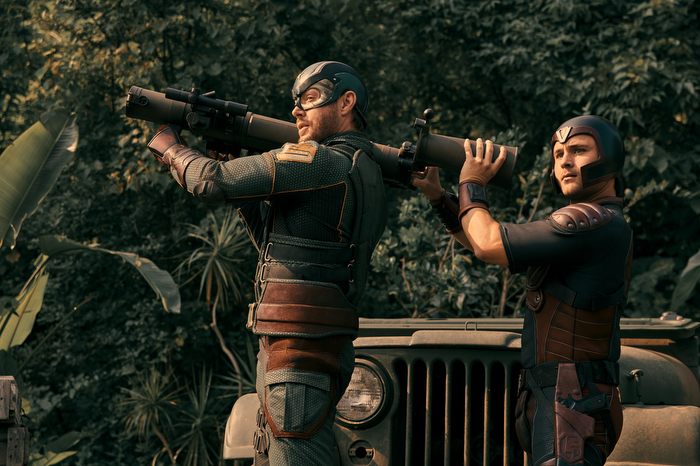 Look out Captain America … Soldier Boy is on your left. Season 3 of the blockbuster superhero satire The Boys – now playing on Prime Video – introduces internet heartthrob Jensen Ackles as a demented version of Marvel’s stalwart Star-Spangled Avenger. But where Cap is virtuous to a fault, Soldier Boy revels in violence and other bad behaviors, which makes him the perfect addition to The Boys‘s roster of gleefully profane “heroes.” And Ackles knew exactly what he was getting into when creator, Eric Kripke, who developed the show from Garth Ennis’s comic book, sent an early Season 3 script his way with an audition scene that didn’t make the final cut.

“I read [the scene] and I just remember there was a line where Soldier Boy said: ‘I was banging some Playboy in the grotto and Peter Fonda’s thumb was up my ass,’ “the actor tells Yahoo Entertainment now.” I don’t know what this says about me, but right then I was like, ‘I gotta play this role!’ I was really excited about it. “(Watch our video interview above.)

Like Steve Rogers before him, Soldier Boy is a man out of time. Introduced into The Boys universe as “America’s first superhero,” he and his super-team, Payback, operated during and after the Vietnam War. But then a bloody attack by the Soviet Union in the early ’80s left Payback decimated and Soldier Boy apparently dead. But the official record may not be entirely accurate … which means that he’ll potentially be back and badder than ever before the season wraps up.

It’s fair to say that Ackles had the inside track with Kripke when the writer / executive producer started thinking of who he wanted to be his Soldier Boy. “You know, I vaguely know the guy,” Kripke says, cheekily referencing their shared history on the dearly departed TV series, Supernatural. Kripke created the show way back in 2005, and cast Ackles and Jared Padalecki as the demon-hunting Winchester brothers, Dean and Sam respectively – roles they ended up playing for fifteen seasons. (Kripke left the show after the fifth year.)

“It was a homecoming,” he says of their reunion on The Boys. “I can’t wait for people to see Jensen in this role. I think they’re gonna be really surprised. I’ve always known that as great as he made Dean Winchester, there’s a million other things he could do. And I was excited to partner with him to show this entirely new character to the world and, and really show even more of Jensen’s range. “

For his part, Ackles feels like he could play Soldier Boy all day. “I mean, the shield was a little cumbersome – I’m not gonna lie,” he says, laughing. “I was like, how the hell am I gonna carry this thing around all season? But it was a lot of fun. There’s such a wealth of detail and color that these guys write into these characters.”

As the newbie on set, Ackles relied on co-stars like Chace Crawford and Claudia Doumit to give him a crash course in all things Boys. Like, for example, how scared should you be when you open a script to see what crazy thing happens to your character next? According to Crawford, the answer is, very.

“We’re all scared,” admits the actor, who plays the aquatic hero, the Deep. “After opening the first ten pages of every script, I’m always like, ‘What are we in for?’ I think some of the stuff is probably harder to watch than it is to film, but it was all wild. Hopefully, I can work again after this season – we’ll see! “

If and when Soldier Boy returns to the present day, he’s likely going to have to go head-to-head with Homelander, the show’s dark-hearted answer to the DC Comics titan, Superman. And that means Ackles will have to match the extreme intensity of Antony Starr, who plays the world’s most powerful psycho. That’s an intensity that Doumit – who plays anti-superhero congresswoman, Victoria Neuman – has experienced firsthand.

“Antony is so much fun, but there’s this switch that happens where you’ll walk into the room and are like: ‘Oh, I’m with Homelander now,'” she says, laughing. “I remember being in this scene with him, and it was like: ‘There’s some tension in here!'”

That’s nothing like the tension that could be generated from a Soldier Boy-Captain America showdown. Asked whether he’s hoping to hear from Chris Evans about his send-up of Cap, Ackles briefly indicates that’s a battle he’d relish. “Chris and I should probably talk about doing some sort of face-off or crossover,” he teases, before instantly changing his tune. “No, he’s got magic powers! And his shield can return to him; my shield is just a blunt object. He wins.”

But would Evans win the other Cap-centric competition: namely, who has America’s ass? That’s another title Ackles is happy to surrender to Marvel’s shield-slinger. “Evans is gonna win that one, too. He doesn’t have three kids, so he gets to work out!”

– Video produced by Jen Kucsak and edited by Schuyler Stone

The Boys is currently streaming on Prime Video