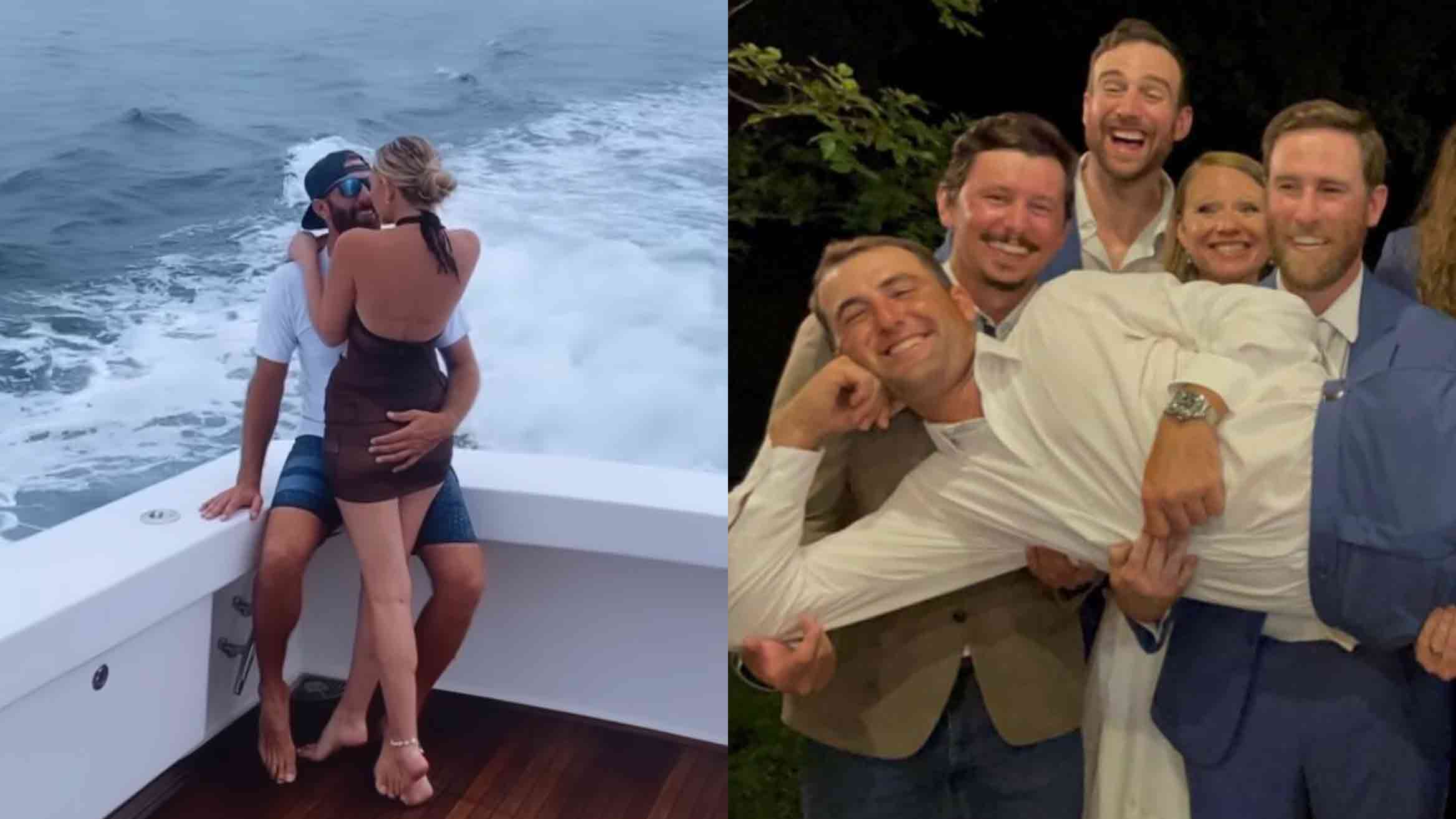 Hello folks and happy Memorial Day weekend! While you’ve been out at the beach and grilling hotdogs, I’ve been doing the Lord’s work (read: attending a college graduation and following all-things golf extremely closely on social media). Lucky for us, the past week has been chock-full of great moments.

All great things must come to an end, as did JT’s Tour — best streak of 21 straight cuts made did at the Charles Schwab Challenge. What better way to end it after winning a major title? He celebrated his win and took his MC in stride with this post. Honestly, I’d probably be relieved to get to go home after being on the road for so long. Then again, maybe that’s one of the many reasons I don’t have what it takes to be a Tour player.

Great pic. I would like to draw your attention to the house itself. Surely this can’t be Thomas’ home. Who are these people?

This must be at an Airbnb, right? Which makes me realize, I’ve never seen any photos of homeowner’s family members on the wall when I stay at a rental. I wonder how often Tour players do.

Tom Brady has done a lot of superhuman things. He’s a seven-time Super Bowl Champion, five-time Super Bowl MVP, 3-time regular season MVP, first in all-time passing yards, etc. and so on (Great googling, Claire). Anyways, he’s done a lot. Which is why I was not shocked to see him make this shot from the fairway.

Technically, it’s not an ace because he was hitting from a set of tees in the middle of the fairway (probably for video purposes). However, as someone who does not have an ace, I don’t really get to be the judge of what counts. It’s still really cool, though. My favorite part is when Brady jumps for joy with a childish smile on his face. Nothing can make a grown man celebrate like that besides golf.

Also we’ve got yet another edition of The Match coming up on Wednesday. Tom Brady and Aaron Rodgers will face off against Josh Allen and Patrick Mahomes at the Wynn Golf Club in Las Vegas.

Newlyweds Dustin Johnson and Paulina Gretzky took a trip to Baker’s Bay in the Bahamas with some friends for a relaxing weekend. You may remember that Justin Thomas, Jordan Spieth, Rickie Fowler and Smylie Kaufman took their talents to Baker’s Bay for spring break in 2016 and 2017.

It’s a hot spot for Tour pros! Okay, let’s see what the Gretzky-Johnson group was up to.

DJ and Paulina are nothing if not boat people, so they got to spend some quality time on the water and with friends in the Bahamas.

DJ hit the range with some friends, who are not golfers. I wonder if they ask him for tips out on the course? And of course, no trip is complete without a group photo, which Paulina graciously shared with all of us.

I had to save the best for last, which is whatever is going on here.

In the video, DJ was cheering on his pal who held his head in a bucket of ice before shotgunning a beer. Don’t try this at home, kids!

And honorable mention to DJ’s brother and caddy, AJ, who made an ace on his birthday. What a special day to make a hole-in-one (golf gods, if you’re reading this: I’m not picky. I’ll take an ace on any day).

Folks, we’ve got a big week coming up for Jena Sims and Brooks Koepka. They’re tying the knot later this week, and it’s good they didn’t plan for this wedding to be a minute sooner because the couple has been very busy attending Miami Heat playoff games.

I’d like to take a moment to open up a discussion on Koepka’s shirt.

I’m not totally sure what’s going on with it, but it’s just Koepka once again proving that he does what he wants. Why stop at blond hair? Toss on a wild shirt to get the people talking!

They attended another game on Sunday night, but Koepka’s outfit was much more tame.

The wind took it! Your shadow was in my line! These greens are insane! I’ve heard (and maybe even used) every excuse in the book when it comes to putting, but this green at the Iowa Girls 3A State Golf Tournament actually was insane. Check it out.

Numerous 10-putts! While I feel extremely sorry for these girls, I’m also secretly relieved that I’ll never have to come into contact with that 18th green. I’m not sure I’d ever finish my round.

Before we get into Scottie Scheffler’s Sunday, I’d like to take a moment to appreciate his workout attire.

Yes folks, he hit the gym in the same outfit he played in later on Saturday. It probably saved him some time and laundry, but I do find it funny that he didn’t toss on at least a pair of gym shorts while warming up. Hey, the rest of us only need one work outfit a day, so why should we hold Tour players to a higher standard? Lots of older men workout in jeans, a golf shirt and an old pair of sneakers at my local YMCA. Perhaps collared shirts are the new cut-off tank top. I’m okay with that. On to Sunday.

We learned on the broadcast that Scheffler and Burns are really close pals. Not only did they stay together for the Masters, but they ran a retreat together for kids in Dallas last year. So all things considered, the playoffs would be fun. And it was. Except Scheffler had a prior commitment in Dallas on Sunday night.

I remember junior year of high school, my prom date was running very late due to a squash match. Like, arrived for the last five minutes of pictures late. That, of course, is on a much smaller scale, but I do know the feeling of waiting for someone when you’re all gussied up! I guess that’s one shortcoming of being married to the World No. 1: he’s gonna have a late tee time on weekends. And he might just end up in a playoff. Luckily, Scheffler made it to the wedding in time for the best part: the party.

Ah, lifting up the groom. A time-honored tradition.

The wedding party also took the time to lift up (literally and hopefully metaphorically!) The Charles Schwab Challenge runner-up.

I do have a few thoughts here. Is it almost better for the sake of the wedding, that Scheffler did not win the Charles Schwab Challenge? Would he have stolen the show, or are his family and friends so used to him being around that it wouldn’t have taken away from the event? Also, where did he get ready? Was this a “sprint off the 18th green and change in the car” situation like my brothers do all too often when we have family parties, or did he shower at the course? Props to Scheffler for getting ready so quickly. I’d need a whole glam crew to get my hair and makeup done on time.

After sinking a wild putt on the first playoff hole to beat Scottie Scheffler and win the Charles Schwab Challenge, Burns treated himself to a meal of champions *.

* These meals may vary, depending on the champion. For Burns, this meant a trip to Buc-ees.

I must admit that I had never heard of Buc-ees before stumbling across this image. I ran to the internet to check out their website, where the fine establishment is described as “a chain of travel centers known for clean bathrooms and many fueling positions.” Buc-ees won a nationwide contest in 2012, so they can officially say they have the cleanest restrooms in America. How about that! They have locations in Texas, Alabama, Georgia, Kentucky, Florida and South Carolina. It looks like Burns got a coffee and some sort of hot sandwich before hitting the road. We love a low-maintenance PGA Tour winner. Also, I can’t help but wonder if a single person recognized him there.

Friends, if you are not already following Zillow Gone Wild on social media, kindly change that at your earliest convenience. Their content is amazing.

It’s a collection of the coolest, zaniest, most surprising houses on the market all in one place. And today, Zillow Gone Wild dipped its toes into the golf course.

This Arizona home includes a 9-hole putting green. In the living room. Never mind a television on the wall, a couch or a coffee table. Say goodbye to your interior designer dreams of perfectly situating a room’s colors, art and furniture all together. Because this living room has one thing and one thing only: golf.

Now, I appreciate a nod to golf here and there throughout a household. This, however, seems excessive. But to each their own. And the lucky buyer of this home will save money on trips to mini golf courses in the future, which is a plus (I think. I’m not sure how quickly those returns will pay off).

We’re up for a great week in golf, friends. The US Women’s Open starts on Thursday, and Nelly Korda is back for the first time since February! We also have the Match. And a PGA Tour wedding. And finally, we have the Memorial. I tend to judge tournaments based on their proximity to good ice cream, and there’s a milkshake bar for contestants at Jack’s place, so this is pretty far up on my list.