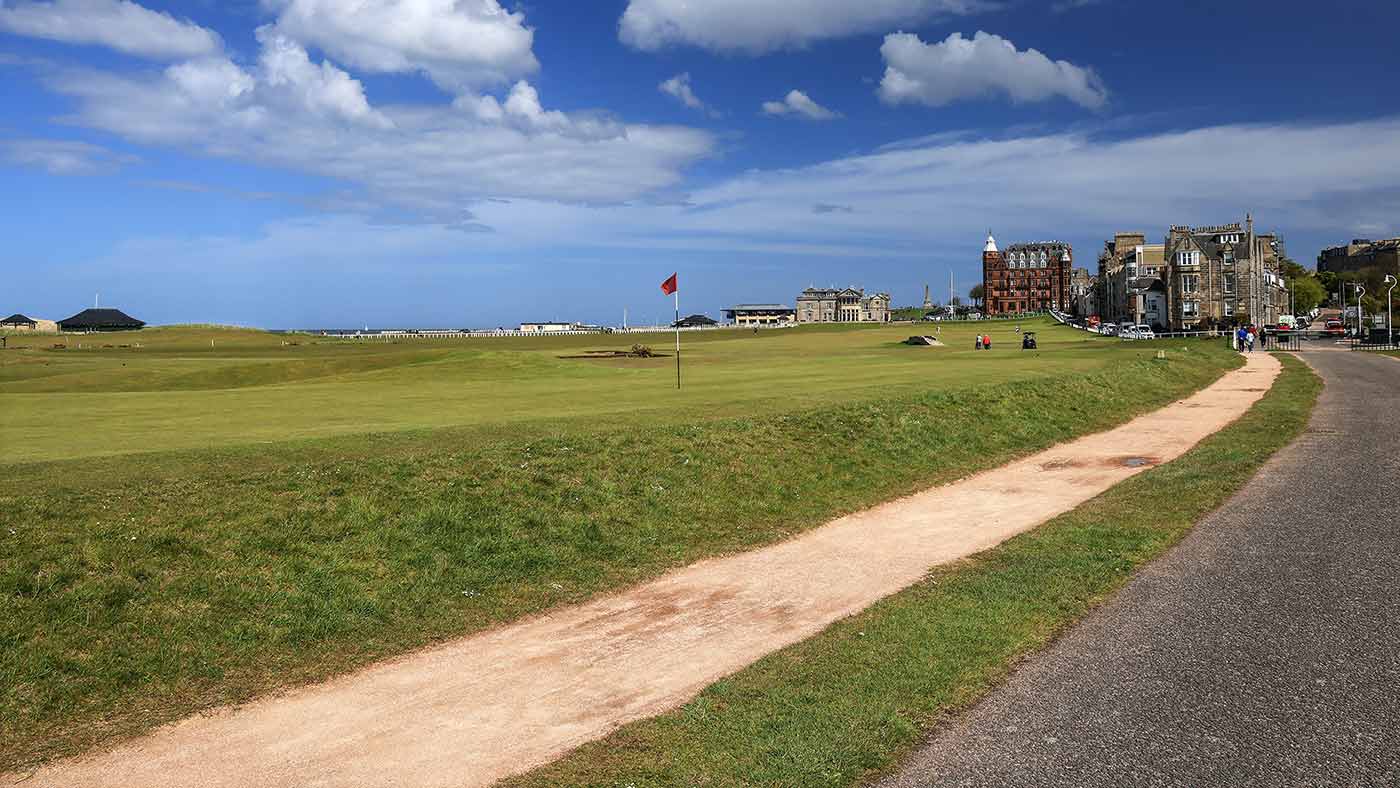 The 17th green at the Old Course is narrow with trouble guarding it from everywhere.

ST. ANDREWS, Scotland – Justin Thomas had to show his fiancée, Jillian Wisniewski, so she could believe it. Thomas missed the cut at the Genesis Scottish Open, so he decided to get extra Open prep in St. Petersburg. Andrews. With Wisniewski in tow, he explained the Road Hole.

A few days later, at noon on Tuesday, Seamus Power stepped to the 17th tee and pummeled a drive right, dangerously close to the same hotel. The right-to-left wind was supposed to bring it back, but it’s unclear if it did.

“People just lying in bed and get their window smacked,” quipped one spectator.

Besides being quirky, the par-4 17th hole at the Old Course – most commonly known as the Road Hole – has long been the hardest hole in Open Championship history, or at least since the R&A has been keeping track. It’ll be challenging again this week – and crucial for any pro who wants to win.

“A 3 is a massive bonus there,” said Rory McIlroy. “You take four 4s and run very happily to the 18th tee.”

But that doesn’t happen often. It’s been the hardest hole on Tour in each of the last four years an Open has been played at the Old Course, and four of the six hardest Open holes in the past four decades have been the 17th. In 2015 it played 0.655 shots over par and there were more bogeys (217) than pars (203), surrendering just nine birdies.

So, what gives? It starts with the tee shot, and picking a letter.

At 495 yards – lengthened from 455 yards for the 2010 Open – it’s the longest par-4 out here and forces players to hit a blind shot over a corner of the famous Old Course Hotel. The sign with the hotel’s name – OLD COURSE HOTEL – serves as an aiming point. Amateurs, with a tee box farther up and closer to the sign, will usually play a safer shot left of it, although, as one spectator said on Tuesday, “I think a lot of people just smack it into the wall, to be honest . ”

Pros, however won’t take that line. Some will go over the word COURSE. Some might get more aggressive and go over the L in HOTEL. That’s a longer carry, but it’s a better angle.

“[My caddie] JJ [Jakovac] is telling me aim over the COURSE part of OLD COURSE HOTEL, ”Collin Morikawa said,“ but don’t miss it right of the HOTEL. ”

“I hit one way right yesterday in the Champions Challenge, and I was out of bounds by like a yard,” Rory McIlroy said. “Like I felt like I hit it right of the HOTEL and it was just out. So you can really challenge that right side, but you have to have a lot of trust in your golf swing to do that. But once you get your tee shot away, it then opens up every hole location on that green. ”

The right side of the fairway is the goal. That ideal shot from there is a draw to a narrow, angled green that lands short and releases. But if your approach misses right you’ll be stuck on the gravel path, road or, even worse, up against the stone wall. A pull left brings the treacherous Road Hole bunker into play, which gobbles up any ball in its path.

Left off the tee is even more trouble coming in (and especially since maintenance teams have been watering that rough for weeks). It’s a terrible angle to the green with the bunker short and the road and stone wall long.

“If you hit it into that left rough, it sort of takes all your options away,” McIlroy said. “You’ve just got to hit it to the right front and then try to make your two putts from there.”

The last two Open winners have played it a combined five over (and, fun fact, in the four-hole aggregate playoff in 2015, all three players made bogey). The last time an Open was here, in 2015, Jordan Spieth made a monster birdie putt on 16 to tie the lead on Sunday, but he bogeyed the 17th and missed out on a playoff by one. That same year Mark Calcavecchia made a 9 here, the same score KJ Choi and Zach Johnson made in 2015.

The pesky bunker has been the demise of many golfers. A front pin should save some, as players can splash out above a less severe lip, but that won’t happen on the weekend.

“Everyone knows left in the bunker is dead,” said Matt Fitzpatrick. “Missing the green right is dead. Short is the safest bet, but it’s not easy from there. It’s just a tough hole. ”

On Tuesday, JT Poston hit one with an aggressive line over the sign. It likely sailed OB Depending on the wind, one of the ideal landing areas is just north of The Jigger Inn, the iconic pub that sits across the stone wall. After he won The Open in 2010, Louis Oosthuizen reserved the entire pub to celebrate. He played the 17th in two over that week. Poston teed up another, this time with a fairway wood, and took aim.

“Very hard. Very, very hard, ”Jon Rahm said, repeating himself for emphasis. “Obviously under pressure any hole can be hard, but 17 is a proper test.”

Josh Berhow is the managing editor at GOLF.com. The Minnesota native graduated with a journalism degree from Minnesota State University in Mankato. You can reach him at joshua_berhow@golf.com.