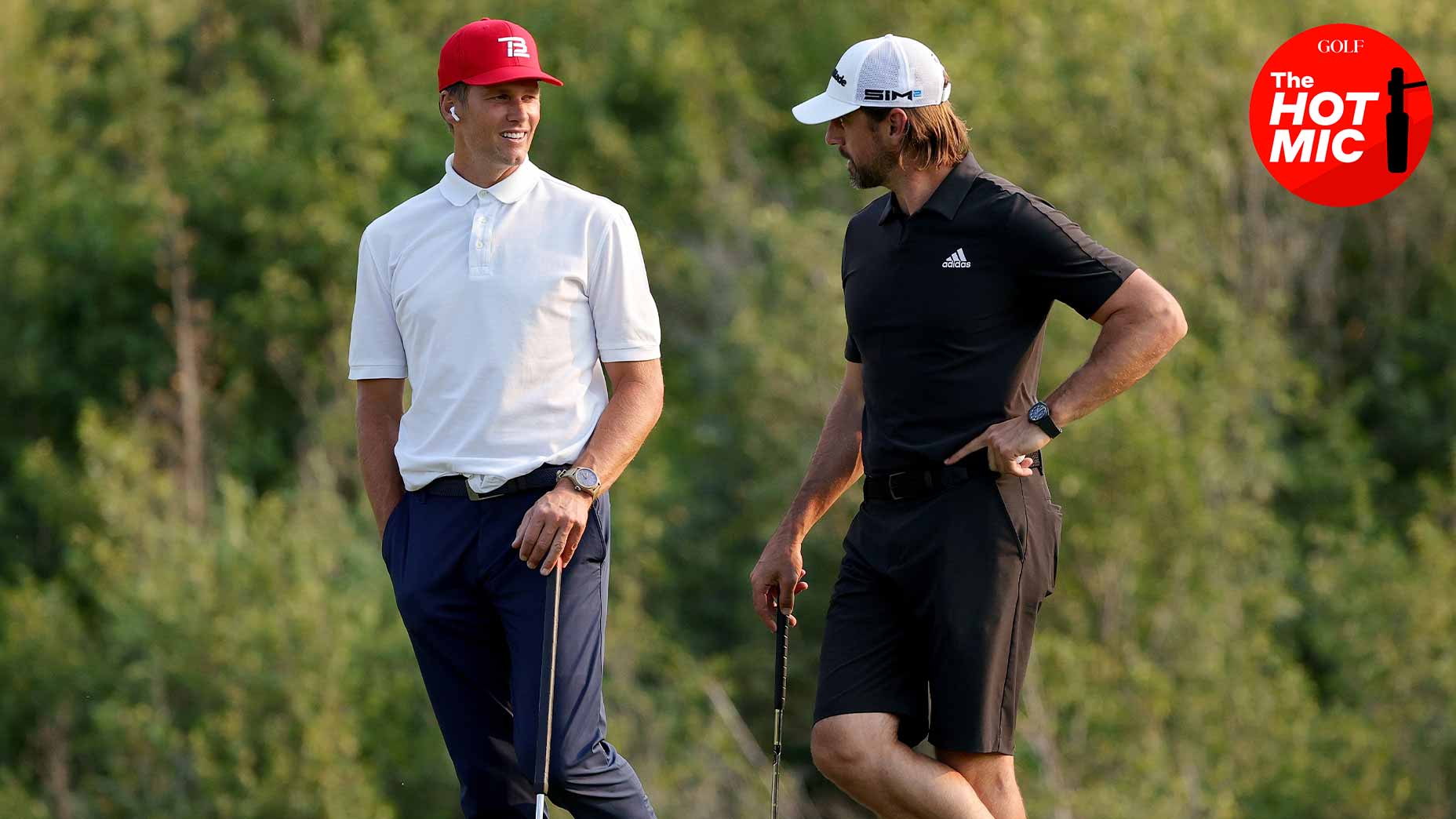 Aaron Rodgers and Tom Brady will return to The Match – alongside Josh Allen and Patrick Mahomes – on Wednesday.

Bryan Zuriff is golf TV’s most off-beat luminary. A Hollywood producer owning executive producer credits on ‘Ray Donavan‘and’Jobs‘Zuriff’s career has tapped every corner of the entertainment industry (and more than its fair share of blockbusters).

In late 2018, though, Zuriff adopted a new passion project. With the help of an all-star cast of celebrities and golf superstars, he launched The Match, a made-for-TV golf event pitting celebrities against each other for huge charitable sums.

For the first Match, Zuriff recruited an old friend: Phil Mickelson, whose tenure has now spanned close to a half-dozen Match appearances and many millions raised for charity. Still, Mickelson’s time has not come without controversy. In January, The Match – and subsequent rights fees charged by the PGA Tour for Mickelson’s inclusion – served at the center of Lefty’s now-infamous ‘obnoxious greed’ comments.

On Wednesday, The Match will take on its newest form when four NFL superstar quarterbacks – Tom Brady, Aaron Rodgers, Patrick Mahomes and Josh Allen – head to the Wynn Las Vegas for a battle all their own. This match will be just 12 holes and feature live spectators for the first time, but otherwise, Zuriff says, will feature many of the same high-tech antics that have helped shape it into the media force it is today.

Ahead of Wednesday’s Match, which airs on TNT at 6:30 pm ET, the Hot Mic caught up with Zuriff to chat all things golf television, star QBs and Phil Mickelson. (The answers below have been lightly condensed and edited for clarity.)

James Colgan: Alright Bryan, let’s get ripping. First off, what would you say is the biggest production challenge behind this year’s Match?

Bryan Zuriff: Honestly, there aren’t a lot of challenges. We’ve done six of these, and we kind of have a good rhythm on this. tome [Brady] and Aaron [Rodgers] are coming back, so I think the biggest challenge is basically making sure that Josh [Allen] and Patrick [Mahomes] feel comfortable. It’s a tough setting, playing with the drones flying above you and Charles chirping in your ear. So probably the biggest challenge is making sure they feel comfortable, because you kind of get thrown out there.

There’s a lot of stress, so I hope they can handle that. But that also is what makes it fun, too, because who knows what’s gonna happen?

JC: Does that worry you at all? That you might have four guys flame out on the same hole?

BZ: You know, it really doesn’t worry me. Turner does such a good job, and we have [Charles] Barkley, you know, so we can rip on them.

I think golf fans like to see athletes struggle sometimes in the sport that we all struggle at. Patrick and Josh, they hit the ball a mile – I mean, they really pound the ball. So I think they’re gonna hit some really fun shots that are gonna be really far that will get them comfortable. Hopefully we just get into a nice competitive setting.

You know, I just hope it lasts long and it’s not over quick. That’s probably my biggest fear. I can’t control that.

JC: Why do you think Turner has worked so well for The Match?

BZ: First of all, Charles [Barkley] is phenomenal and his love for golf is extraordinary. So you have passion coming from there.

And then Turner. They do such a good job with Inside the NBA, and we bring that same producer for doing this. There’s a style that I think works in a competitive environment that also has a tongue in cheek-ness to it. And that’s because they’re more of a boutique. ESPN has to put programming on every hour. So your crews are spread out. TNT is concentrated only on big stuff – NCAA, NBA, hockey, for The Match. And ours is only twice a year, so we can really find great people to shoot our stuff. We’re not subject to doing programming every day. You can get diluted. So I think that’s why it works so well on Turner.

JC: One of the most interesting things – from watching The Match over the years – is how it seems to morph with every iteration. Why the trend toward NFL quarterbacks, as opposed to professional golfers?

BZ: In all honesty, if this works with professional football players – which I think it will – it frees us up from the Tour. And if you think about it, what we do across all of our platforms generates more buzz and interest in golf than probably any other event but the Masters. And now if we’re able to do this without PGA Tour players? Name another sport where you can accomplish that.

So we don’t have to deal with some of the rights fees and some of the some of the restrictions working with the Tour. If you work with the Tour, I can’t shoot this event on a Wednesday. I couldn’t do this on Thursday. Now I can do this anytime we want. They don’t own golf. They own the players.

I’m not saying we’re not gonna go back to the Tour. I love working with the Tour. We’re using them [rules officials], they like our product and we have a great relationship with them. But if we can create real matchups that make sense and and capture the public, and we can do it without a league? That’s pretty incredible.

JC: You guys have pushed a very tech-forward broadcast over the years. How are you planning to continue pushing the button on that?

BZ: The thing is, golf is covered by two networks, and it’s all the same every week. We’re giving a different flair to it. And I think people like that. So I think our product works really well on TNT because we bring a uniqueness to watching golf.

To truly grow the game, you have to start appealing to America. Golf has been a niche sport, but now what you’re seeing is that these big athletes and big celebrities – Chris Pratt, Tom Holland, Josh Allen, Pat Mahomes, Justin Timberlake – they all play golf. So it’s, you know, it’s Chris Paul. Steph Curry. I mean, the list goes on and on.

So there’s something very appealing about golf. But the way I think the traditional networks cover it, they don’t capture that. They’ve kept it very much the same. I think the game has grown and changed and I think the coverage needs to grow and change. I think we try and do that.

JC: I know you have a pretty good relationship with Phil. Is there any chance that we might see him or hear from him during the broadcast?

BZ: No. I swear to God, people think I’m making this up – Phil is enjoying his time off the hamster wheel. He’s enjoying it. He has gone balls to the walls for 30-plus years – doing every interview shaking every hand being an incredible ambassador. He’s taking a break and he’s actually enjoying it. So we will eventually see him, but he’s enjoying his time off. And he’s really happy about that. But I consider him a lifelong friend and a partner. And when he wants to come back, he’s welcome to come back.

JC: Could you see yourself going back to golf stars? Back to Phil, or some of the other names who have played in the past?

BZ: I’m not pigeonholed into oh, ‘we’re going in this direction.’ Now. I did mention our work’s good. If it works, I don’t have to deal with the Tour. But sure, I’d love to do Justin Thomas, potentially. Or you know, Phil, Tiger, or whatever it could be. We think about what’s happening in the time, and we try and capture that moment and make it compelling.

JC: I want to talk about audience numbers for a second. Do you guys drive a younger audience than traditional golf?

BZ: Correct. And a lot of it has to do with the cross platform stuff. Really, what’s most interesting is how we drive Twitter, how we drive Bleacher Report. We try trending Twitter the day of The Match. Our social media engagement is massive, and that’s what our brands love. So I think we do charity in a fun way. In the sense that, you know, we do cool holes, cool shots. So we’ve integrated a lot of the stuff that the PGA Tour has been caring about for a long time, and we’ve integrated it in a fun way.

JC: Bryan, thank you so much for your time.