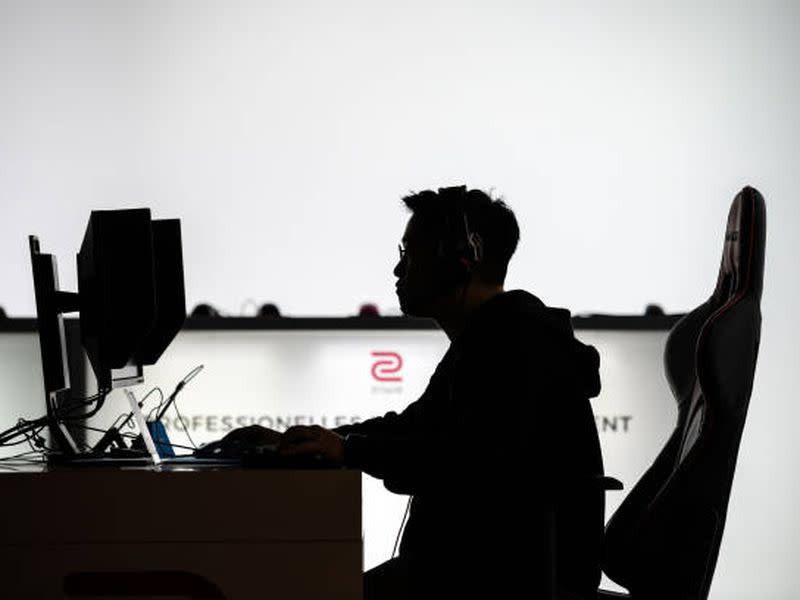 Prices: Bitcoin and other major cryptocurrencies were roughly flat from the beginning of the weekend.

Insights: The law can create headwinds for GameFi and NFT adoption.

Technician’s take: BTC has been struggling to sustain positive momentum over the past few days.

Catch the latest episodes of CoinDesk TV for insightful interviews with crypto industry leaders and analysis. And sign up for First Mover, our daily newsletter putting the latest moves in crypto markets in context.

Bitcoin flittered around the same price where it started the weekend, sometimes a little over and other times just under $ 39,500, as investors continued to digest worsening events in Ukraine and the increasing likelihood of a half-point interest rate hike when the US central bank meets in May.

The largest cryptocurrency by market cap was recently trading at $ 39,650, down slightly over the previous 24 hours. Ether, the second largest crypto by market cap, followed a similar weekend holding pattern and was also recently off roughly a percentage point at about $ 2,930. Other major cryptos from the CoinDesk top 20 by market cap were largely in the red with DOT and MATIC off 4% and 3%, respectively at certain points. Popular meme coins DOGE and SHIB were recently off more than 2%. Trading volume was light as is often the case over weekends.

Bitcoin’s quiet weekend followed a volatile Thursday and Friday that included a run past $ 42,000 and then steep decline after U.S. Federal Reserve Chair Jerome Powell said the central bank was ready to raise interest rates more aggressively to tame inflation. The Consumer Price Index hit 8.5% and could increase amid surging energy prices and supply chain snags, both exacerbated over the past six weeks by Russia’s unprovoked invasion of Ukraine. Housing rents and the price of a range of products have increased markedly this year.

The price of Brent crude oil, a widely regarded measure of the energy market, closed Friday at about $ 105 per barrel, a more than 35% gain from the start of the year.

Cryptos’ price drops correlated with major equity markets, which tumbled on Friday with the Dow Jones Industrial Average and tech-heavy Nasdaq off 2.8% and 2.7%, respectively. Investors have remained cautious about riskier assets, including equities and crypto.

Meanwhile, Russia’s onslaught raged on with Ukrainian barricading themselves in a steel plant in the key Black Sea port city of Mariupol. A US delegation led by Secretary of State Antony Blinken and Secretary of Defense Lloyd J. Austin III were expected to visit the Ukraine capital Kyiv.

Joe DiPasquale, the CEO of fund manager BitBull Capital, noted bitcoin’s recent failure to consolidate around $ 42,000, which he said was “important to continue upward price movement,” and that support could form much lower.

“BTC failed to hold that level this week and was rejected again,” DiPasquale wrote to CoinDesk. “We have continued to see $ 38K levels acting as support but continued testing of this range may result in a breakdown toward $ 32K- $ 35K. On the upside, $ 42K remains a strong resistance.”

He added: “At the moment, there are no major bullish catalysts on the horizon and BTC is likely to grind in this range or breakdown lower before more aggressive accumulation can begin.”

“What happens in the Metaverse, does not stay in the Metaverse,” said the Texas Securities Commissioner when he ordered a halt to trading of the ‘Gambling Apes’ NFT collection from Cyprus-based Sand Vegas Casino Club.

Despite the Sand Vegas team saying that it will abide by the law but isn’t subject to US rules, jurisdiction shopping ultimately lost and US rules won. The project has been delisted from US-incorporated OpenSea and is now listed on LooksRare, which operates as a DAO.

We will see how long this lasts. It’s not that the NFT promotes the vice of gambling; rather, the problem is that the promise of profit-sharing likely makes it a security and violates the Howey Test, which determines whether a transaction is an investment contract, and has become increasingly relevant in considering digital assets.

“The main issue with the ‘Gambler'” NFTs is that there was an explicit expectation of profit sharing, which appears to run afoul of the SEC’s Howey test, Christopher LaVigne, a partner in the litigation and arbitration team of international law firm Withers, told CoinDesk by email. “In terms of the difference between NFT marketplaces and crypto exchanges, there is no real difference when it comes to the government’s attempts to subject them to existing securities laws.

LaVigne added: “If the SEC believes an NFT marketplace is providing a trading platform for securities, it will most certainly take the view that the marketplace is operating as an unlicensed exchange. To this end, it appears that OpenSea has suspended trading of the Gambler tokens. ”

Online gambling, which has been around since Web 1.0, also has its own set of rules which the Metaverse must abide by as US courts are dead-set on the definition of gambling, according to LaVigne: “staking or risking something of value upon the outcome of a contest of chance. ”

But the question is, have American courts ruled about how this applies to video games?

While US law doesn’t apply extraterritoriality, the broad scope of transactions possibly occurring in the US, or involving US customers gives it a long reach.

“State courts confronting whether contests in video games constitute gambling have generally concluded they do not,” said LaVigne. “The reasons have varied, including that the items ‘won’ or lost are imaginary or virtual ‘in-game’ rewards that cannot be exchanged for a thing of value.”

LaVigne points to a 2017 decision in Mason v. Machine Zone which said an in-app game did not constitute gambling because it only allowed a player to win or lose virtual, not real, money or prizes, although a secondary market may exist for selling or purchasing a player’s stats or level achieved within the game for real money.

However, LaVigne noted, there’s also a somewhat contradictory decision from the 9th Circuit. The court, he told CoinDesk, ruled that “virtual coins” or “virtual chips” used to play online casino games qualify as a thing of value, within the meaning of Washington state’s gambling statute, even if the games could be downloaded for free and never required players to bet their own money, because the games could only be played with virtual coins or chips.

“This decision is fairly limited as it does not, for example, address whether it would apply to games where players can access basic gameplay without in-game currency,” LaVigne said, also noting it only applied to Washington law.

Although the crypto industry has a ‘move fast and break things’ mentality the law is the law and can create headwinds. GameFi adoption hit a snag in large parts of Asia, including China, Japan and Korea, because of specific laws already on the books about converting in-game tokens to currency.

While the Sand Vegas Casino Club project may be in the clear as far as gambling goes, promising profit sharing and returns makes it run afoul of securities laws. Dozens, if not hundreds, of projects have been in the same place before and this might be the next victim of the Howey Test.

Bitcoin (BTC) dipped below $ 40,000 on Friday, the midpoint of a three-month long trading range. The cryptocurrency could find support at $ 37,500, although upside appears to be limited toward the $ 46,000 resistance level.

A positive momentum signal on bitcoin’s daily chart was invalidated on Thursday, which typically precedes a period of price weakness. On the weekly chart, however, momentum remains slightly positive, suggesting that rangebound trading could persist over the next few days.

Most technical indicators are neutral, although a significant loss of upside momentum on the monthly chart increases the probability of a break below BTC’s year-long price range. Further, the recent increase in sell volume relative to buy volume means traders have been reluctant to maintain long positions after the 2020 crypto rally.

In case you missed it, here is the most recent episode of “First Mover” on CoinDesk TV:

As the world observed Earth Day, concern around crypto mining and its energy consumption was top of mind. O’Shares Investments Chairman and ‘Shark Tank’ Co-Host Kevin O’Leary joined “First Mover” to weigh in on the ESG debate, the Musk / Twitter drama and more. Plus, Beijing-based Lily Zhang of Huobi provided crypto markets analysis and a few thoughts on the state of crypto in China. CoinDesk reporter Cheyenne Ligon discussed details of a new $ 1.8 million crypto scam.

Retail Interest in Bitcoin Is Dwindling, Google Data Suggests: Data from Google’s search trends suggest retail interest in bitcoin and other major cryptocurrencies could be waning.

Today’s crypto explainer: What Is CityCoins and How Does It Work?

Other voices: Crypto Thieves Get Bolder by the Heist, Stealing Record Amounts (The Wall Street Journal)

“Putting aside the fact that human sexuality is complicated, that love is blind, that not everyone likes the things you do, this is just unnecessary bigotry. Call it” locker room talk “or” boys being boys, “there’s no reason in the 21st century to attempt jokes like this. They were never funny – and “butterface” is a dead pun. If you disagree with how CryptoFinally lives her life, address her ideas. ” (CoinDesk Assistant Opinions Editor Daniel Kuhn) … “The majority of the US Twitter crypto audience is made up of males in their early to mid-30s who largely reside in New York, Los Angeles and other parts of California. They self- describes not just as crypto investors but as fathers, husbands, engineers, entrepreneurs and business professionals, making up 70% of the audience. ” (Affinio Vice President, Product Management Leanne Cochrane for CoinDesk) … “Traders around the world watch the yen’s rise and fall not just to follow Japanese markets but also to gauge how investors globally are feeling. Usually, when markets are rallying, the The yen tends to weaken against other currencies. When markets get turbulent, the yen tends to gain ground. That dynamic has been upended this spring. ” (The Wall Street Journal)