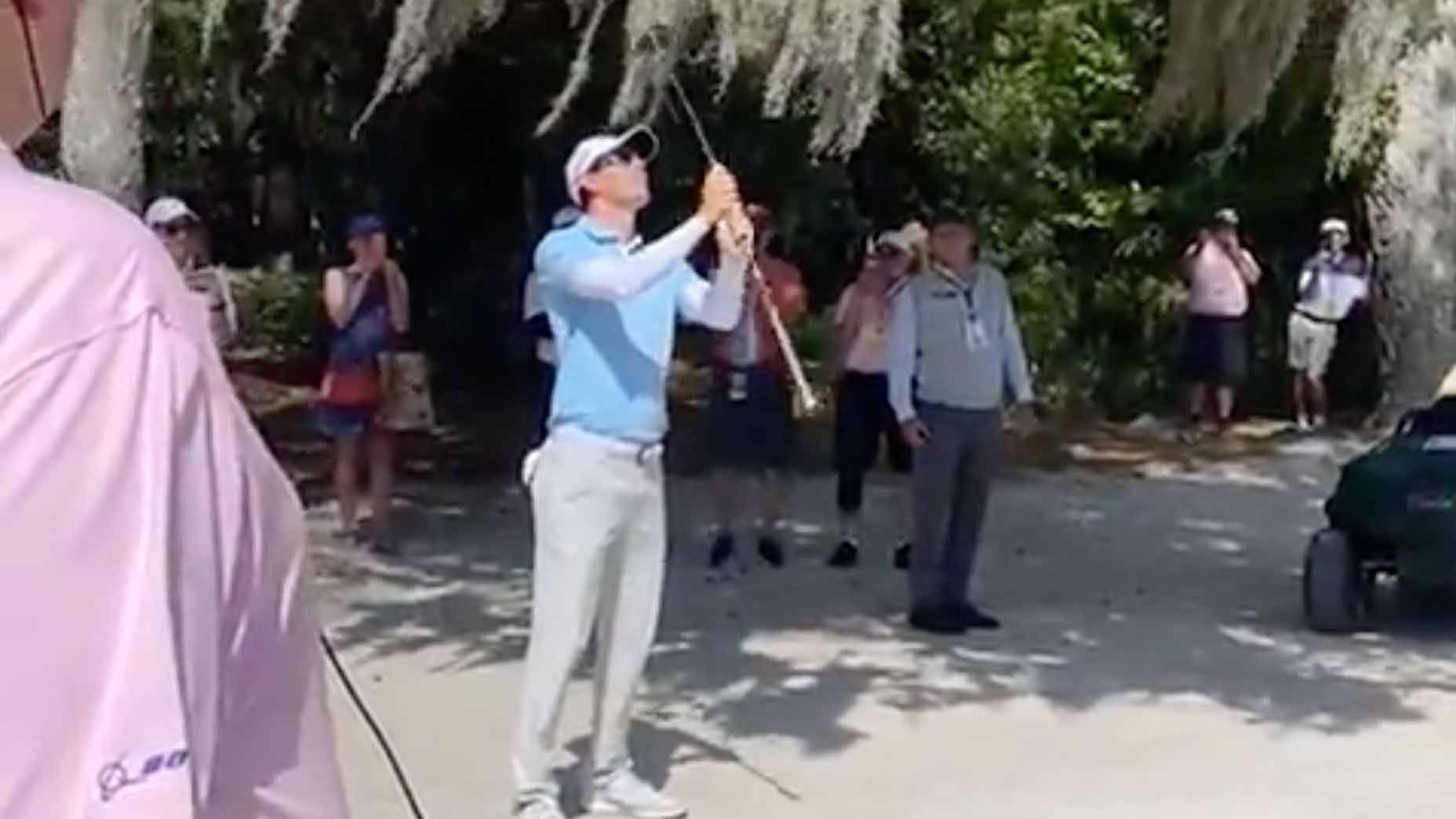 Dylan Frittelli ended up in a strange situation on Sunday at the RBC.

If the way you prefer to get through your Mondays is by delighting in the suffering of others, well, I’ve got good news for you.

Step with me into the Obscure Rules Section of the PGA Tour Library and observe the final-round action of one Dylan Frittelli, who hit a tee shot offline and got punished in a wholly unexpected way.

Frittelli began Sunday at the RBC Heritage in a share of 38th place, four under par and seven shots off the lead. As a result, the TV cameras only caught up to him on the sixth hole, after his tee shot had come to rest in a particularly unfortunate spot: In a tree some seven feet off the ground.

That’s right: Frittelli’s wayward drive at the 6th got caught up in some Spanish moss. That’s where it stuck, suspended, as he approached.

Frittelli seemed to enjoy the challenge. He surveyed the lie from all angles, assessed his landing area and pulled out driver. He gripped the driver halfway down the shaft, swung it forward like an ax into a tree and watched, satisfied, as the ball popped out and rolled into the fairway.

Next he did something distinctly professional: From 144 yards in the fairway he stuck a short iron to 10 feet and rolled in the putt.

Let’s go back to that driver shot in the moss. Because pros don’t typically swing drivers like axes, he wasn’t thinking about the potential consequences of addressing the ball the way in this particular way. As it turns out, he was straddling his line. Had his ball been on the ground, he would have known better; croquet-style putting has been prohibited for decades. But suspended above eye level? The same violation did not occur to him.

But a rules official later delivered the bad news, later confirmed by the PGA Tour: Frittelli was assessed a two-stroke penalty under Rule 10.1c (Making Stroke While Standing Across or on Line of Play).

That rule is written as follows on the USGA website:

c) Making Stroke While Standing Across or on Line of Play

For this Rule only, the line of play does not include a reasonable distance on either side.

Exception – There Is No Penalty If Stance Is Taken Accidentally or To Avoid Another Player’s Line of Play.

Frittelli was deemed to have straddled his line and was therefore docked two strokes. What began as an epic par save turned into a brutal double bogey. He went from one over par for the day to three over. He bogeyed the next hole, too, and stalled out the rest of the day, making bogey at No. 13 and everywhere else to finish T66.

Afterwards, he took to social media to poke fun at the situation.

“Greatest pair of my life to greatest double-bogey of my life,” he wrote on Instagram. He added this:

For those wondering why my score changed after play, I was assessed a 2-stroke penalty for “standing astride” my intended line of play during this shot. The rules of golf remain undefeated ✌🏼 🙄 ”

Did the penalty matter? Not much, if you consider just the two shots. Frittelli’s T56 became T66 and cost him only $ 1,520. Compared to other costly oddities from the weekend, like Harold Varner III’s incident with a course neighbor in his slippers, well, it feels relatively inconsequential.

I chatted with Frittelli on Monday to get his take on the entire situation. His overarching reaction was amazement at the attention the incident had received.

“By far the most in my career,” he said. “Winning the John Deere win doesn’t even come close.” The incident revealed a lesson of the internet – reflected, I suppose, by the fact that I’m writing this story – that golf’s little oddities snag our attention as easily as its big-picture results. “It makes you wonder a lot of things about what fans care about,” Frittelli admitted.

He clarified a few things, too. For one, the penalty wasn’t assessed until at least an hour after he’d signed his scorecard. The Tour called him and then consulted with the USGA, who confirmed the ruling: Two-stroke penalty. Frittelli wasn’t upset with the interpretation but added that he thinks the rule feels a little rigid, considering the situation.

“I think the rule was applied correctly, I just think it’s kind of ridiculous that it’s so hard and fast and concrete,” he said. “There was a seasoned rules official standing 15 feet away and it didn’t occur to him, either. The fact that there’s no leeway for an official to apply the rule when there’s no benefit to me playing it that way, when it wasn’t written for this situation, that’s what I don’t love. “

Frittelli understands the humor of the situation and the public fascination that has accompanied it. He had fun with it, too. He was relieved that the incident hadn’t been more costly, knocking him out of the top 10 or something more consequential. But despite its triviality, he couldn’t help but notice some negativity as he scanned comment sections.

“I’d really hoped to never run into something like this,” he said. “I really do my homework on all aspects of the game and I take pride in that. That’s what I felt saddened by. I would say five percent of people on social media have been critical, saying it’s obvious that I was breaking the rules. I think they’re probably lying to themselves that they’d know it in real time. It’s not a golf swing or a situation that anybody is practicing. ”

Our chat wasn’t all moss and media; we talked about his actual golf game, too. Frittelli is pleased with how it’s coming together heading to the summertime. He made five cuts in a row, highlighted by a T8 at the Valero Texas Open. He’s up to No. 85 in the FedEx Cup points list. He’s been working with his coach, GOLF Hall of Fame Teacher Chuck Cook, on grooving a fade. Off the tee, he’s prioritizing accuracy over distance and making a few technical adjustments to get his club in the right position.

“My game’s trending in the right direction,” he said. “I’ve got control of my golf ball and everything seems like it’s coming together.”

“That would be interesting,” he concluded.

Frittelli’s had his fill of interesting for at least a few weeks.