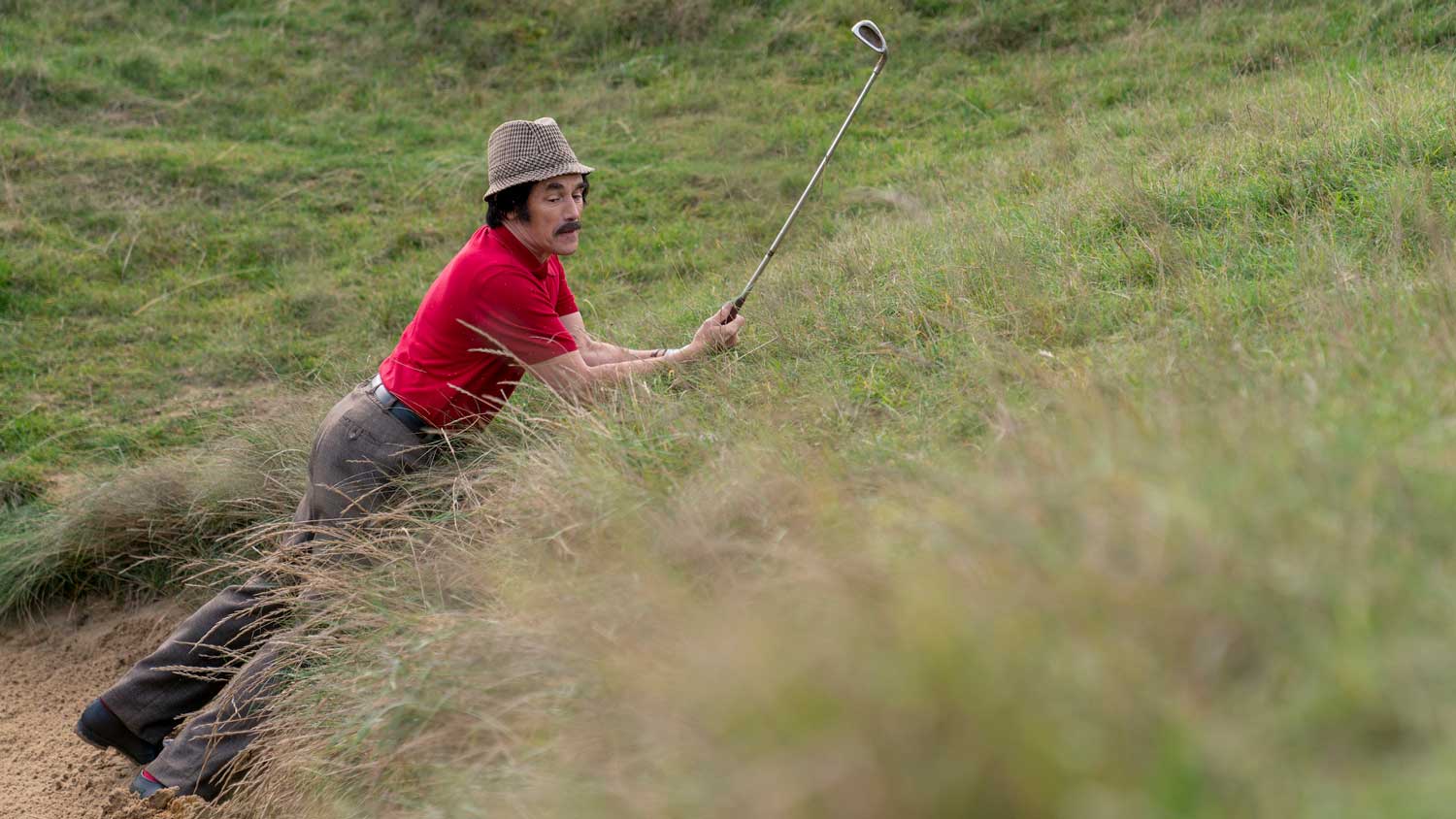 In a new film about his life, Maurice Flitcroft is portrayed by British actor Mark Rylance.

Nick Wall / Phantom of the Open

In the summer of 1976, Maurice Flitcroft, an easygoing crane operator from northern England, registered to play in the local qualifier for the Open Championship.

But that was not the story.

What made it headline news was Flitcroft’s background in the game.

Basically, he had none.

In his mid-40s, itching for a break from his workaday routine and inspired by a glimpse of golf he’d caught on TV, Flitcroft picked up a set of clubs and taught himself to play on a nearby beach. He did not carry a handicap, but if he had, the number would have been stratospheric. He signed up for the qualifier through a simple loophole: He registered as a pro. No one checked.

Let the record show that Flitcroft did not go on to claim the claret jug.

After popping up his opening drive, barely getting it past the first tee, he proceeded to shoot 121, the highest score ever posted in any phase of the Open. Delightful fodder for the British tabloids, his performance outraged the British golf establishment. Angry and embarrassed, the R&A banned Flitcroft from the championship for life.

Undaunted, Flitcroft went on to gatecrash several other Open qualifiers over the years, playing under pseudonyms and in disguises. His exploits gave him a folkloric glint, a populist hero billed affectionately by the press as the “world’s worst golfer.”

By the 1980s, the term “a Flitcroft” had entered British golf lexicon as a playful label for a hapless hacker. Among those who heard it bandied about was a boy from northern England named Simon Farnaby. The son of a greenskeeper and a keen golfer himself, Farnaby knew the meaning of “a Flitcroft” but was unacquainted with its etymology. Only decades later, in 2007, did he learn his origins when he opened the morning paper to Flitcroft’s obituary.

Though he’d once dreamed of playing golf for a living, Farnaby had grown up to be an actor, comedian and writer. He knew a good yarn when he read one. He felt that Flitcroft’s story deserved more extensive treatment.

In 2010, in collaboration with journalist Scott Murray, Farnaby published a book, “The Phantom of the Open.” More recently, he turned that book into a screenplay, which has now become a movie of the same name. In cinematic terms, the film is not a sweeping epic but a quiet charmer that touches on big themes.

“It’s not one of those golf movies where an underdog goes on to triumph,” Farnaby said the other day by phone from New York, where he was on a publicity tour. “It’s about a golfer who starts out bad and stays bad.”

The larger narrative unfolds off the course, with golf as a vehicle for a story about dreaming and risk-taking and the redemptive power of friendship and love – if you really want to go all Siskel and Ebert.

As portrayed by Mark Rylance, Flitcroft is a devoted family man and cheerfully stifled fellow who has foregone adventure for a more prosaic life and yet remains unburdened by resentments or regrets.

When golf awakens something in him, he decides to let his freak flag fly – with consequences that are by turns humiliating, humorous and heartwarming.

“The Phantom of the Open” hews closely to actual events, some of them catnip for golf history buffs. Flitcroft, for instance, really did cross paths with Seve Ballesteros at the ’76 qualifier, just as he really was paired that same year with Jim Howard, the first Black golfer to become a PGA professional. Both scenes are recreated in the movie.

There is some artifice. Quibblers might note that the competition was not in fact broadcast on British television, as the film has it. But Farnaby and director Craig Roberts use that device to move the plot along and, as a viewer, it’s easy to roll with that bit of make-believe.

Harder to figure is the way film handles the evolution of its main character. At the outset, Flitcroft is depicted as a childlike innocent, so painfully naive that he’s convinced he stands a chance at golf’s elite level. When he shows up on the tee in his qualifier, he is shocked to discover that he’s out of his league. By the end of the film, though, Flitcroft has morphed from sweet simpleton to witty prankster, duping the R&A with slapstick disguises and increasingly absurdist feather namesincluding – as noted in the closing credits – Gene Paychecki and Arnold Palmtree.

What accounted for his transformation? Farnaby offered this explanation:

“Think about it. Here’s this guy from a working-class background. Golf was alien to him. He’s out there on his own, hitting shots on the beach. You know what golf is like. You hit a good shot, you feel like you’ve got superpowers, like Popeye eating spinach. (Flitcroft) didn’t have any context. He was on his own, with no one to compare himself to. So, in the beginning, he really did think he was good enough. Then he gets in the qualifier, and he realizes that he isn’t. If nothing else had happened – if the R&A hadn’t banned him – I think that probably would have been it for him in qualifiers. But then they banned him, and he got his back up. He felt he had been wronged. He’d fallen in love with golf, and they were trying to take it away. He wasn’t going to just accept it. ”

That makes sense. But it isn’t a progression made clear in the film.

What is laid bare is Flitcroft’s love for the game and the way it loved him back. His good-natured persistence in the face of failure made him easy to root for, a metaphor of sorts for the game’s allure. Over the years, as his story spread beyond the United Kingdom, trophies and far-flung tournaments were established in Flitcroft’s honor: celebrations of shoddy play.

In 1988, the membership at Blythefield Country Club, in Grand Rapids, Mich., Flew Flitcroft and his family in for its annual “Maurice Gerald Flitcroft Member-Guest Tournament.” In footage from that event that appears toward the end of “Phantom of the Open,” you can see the real Flitcroft playing.

His swing doesn’t look half bad.

“Phantom of the Open” opens in New York and Los Angeles on June 3, and in 30 additional markets the following week. By June 17, it is scheduled to be in theaters everywhere.

A golf, food and travel writer, Josh Sens has been a GOLF Magazine contributor since 2004 and now contributes across all of GOLF’s platforms. His work has been anthologized in The Best American Sportswriting. He is also the co-author, with Sammy Hagar, of Are We Having Any Fun Yet: the Cooking and Partying Handbook.