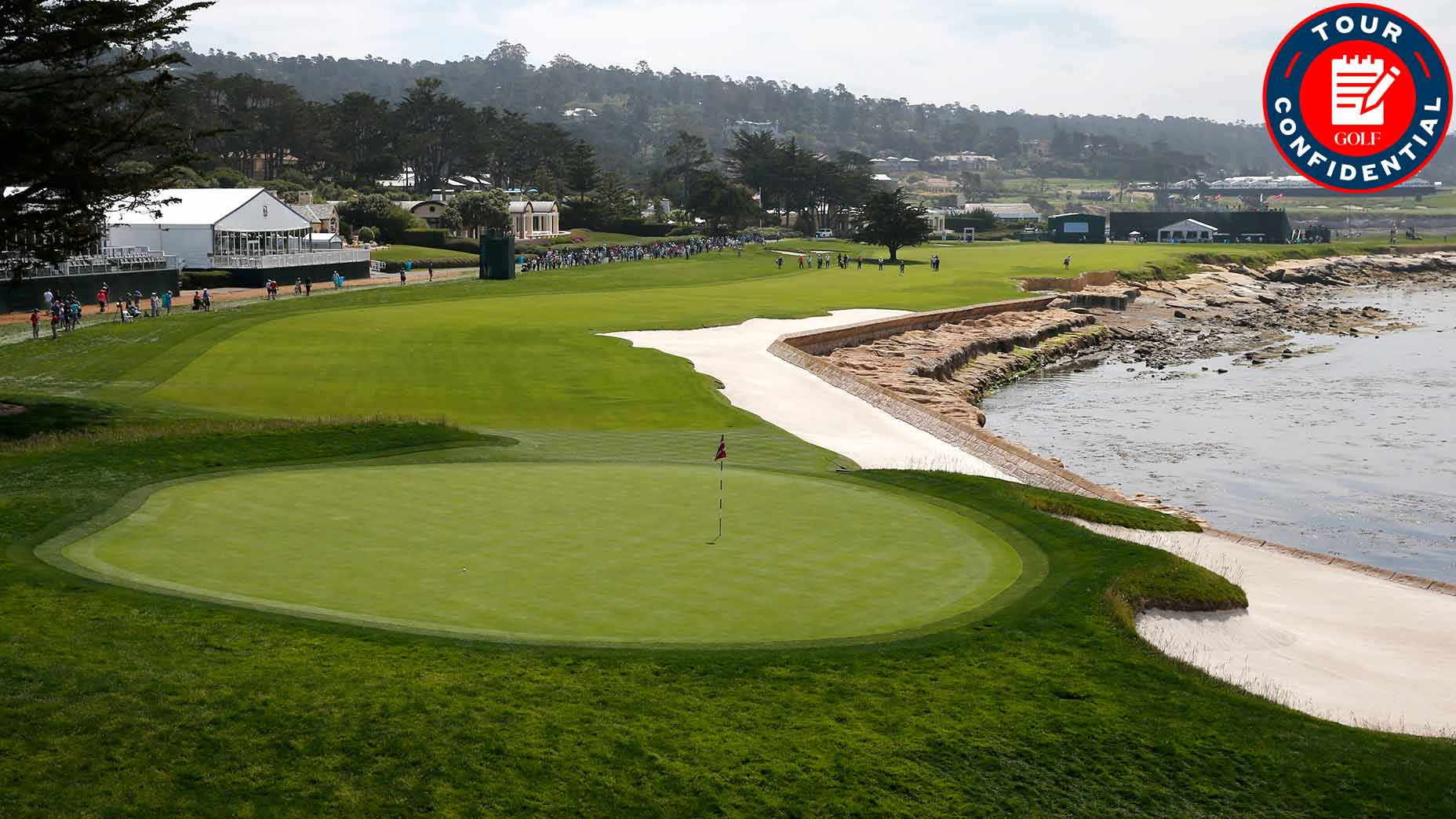 Pebble Beach is the USGA’s newest anchor site, and several more Opens are heading its way.

Check in every week for the unfiltered opinions of our writers and editors as they break down the hottest topics in the sport, and join the conversation by tweeting us @golf_com. This week, we discuss the USGA’s newest anchor venue, ESPN’s latest documentary, the next edition of The Match and more.

1. The USGA announced Pebble Beach as its third US Open anchor site, joining Pinehurst No. 2 and Oakmont Country Club. Pebble Beach Golf Links also received six more US Opens (three men’s, three women’s) and now has eight scheduled over the next 26 years. John Bodenhamer, the USGA’s chief championships officer, said there’s more “exciting things to come down the road.” Two questions: if there’s a fourth anchor site, what should it be? And what are your thoughts on the anchor-venue system now that future Open schedules are starting to take shape?

Dylan Dethier, senior writer (@dylan_dethier): I think / this is generally a good thing. There’s obviously a tradeoff here – one awesome thing about the major championships (non-Masters division) is the way they showcase the country’s best courses – but locking in a reliable set of top-tier courses will help fans get to know them better and appreciate them more. Pebble, Oakmont and Pinehurst each also provide distinctly different tests. They look different, feel different, play different. The fourth site? Chambers Bay, of course! (I’d love to see more of the country represented, too, if possible. And I welcome further discussion about whether Oakmont is in the Northeast or the Midwest.)

Sean Zak, Senior Editor (@sean_zak): Shinnecock is the obvious choice here. Or just New York at large, bouncing between Shinny and Winged Foot. Much as I might be talking out both sides of my mouth here (see below question), I think it’s fine that the biggest Open championship in American golf goes to the very best, classic courses of American golf.

Josh Berhow, managing editor (@Josh_Berhow): It’s fun to explore new courses and great for those states / communities, but we are programmed to like things that are familiar to us. The three anchor sites are all great and different kinds of tests, but I really like the idea of ​​having these trusty options in our back pocket while spending some years exploring elsewhere, like what we did with an Erin Hills or Chambers Bay, for example. But this is a smart move. And, as Sean said, Shinnecock Hills or Winged Foot seem like the obvious next options if a fourth anchor course is added.

Luke Kerr-Dineen, game improvement editor (@lukekerrdineen): Something in the northeast, because few things in golf are better than a rowdy New York crowd on a major championship Sunday. Shinnecock – an obviously good candidate – has been thrown around already, so how about Bethpage Black?

2. Our Sean Zak wrote that with the US Open’s new anchor system, some important / worthy courses and areas of the US will be left out. That’s why, he says, returning to these under-visited areas could become the PGA Championship’s calling card. Agree? Is there a move or thought-process for the PGA here?

Dethier: Oh, I jumped the gun a bit with my previous answer. Yes! The PGA Championship should live on the cutting edge. You go where the US Open won’t. That means new courses. It means different courses. It means showcasing styles of play and regions of the country traditionally underrepresented by the professional game. Take me to Wild Horse in Nebraska, PGA of America!

Zak: I totally agree with the column discussed above, 100 percent. Really, I just love the idea of ​​players showing up to a course they don’t know that well and trying to see if their golf will be better than anyone else’s. That’s what took place all over this country in the 40s, 50s and 60s.

Berhow: For sure. The Masters has Augusta. The Open has quirky links golf. The US Open, we are now seeing, has some of America’s most iconic, classic courses. I’m not sure what the PGA of America’s niche should be, or if there should even be one, but it’s the perfect opportunity to think outside the box and throw some wild cards out there.

3. First reported by Golfweek, pro Robert Garrigus confirmed he requested a release from the PGA Tour to play in the first LIV Golf International Series event, which is June 9-11 in London. He’s the first player to be publicly named, but Garrigus, 44, who is outside the top 1,000 in the world ranking, isn’t much of a household name. Still, will this news make it easier for other interested pros to join, or will it have little impact on potential players on the fence?

Dethier: Does this make it easier? No, not really. It hardly caused a stir even within golf’s mini media ecosystem. What it did, though, is bring this thing one step closer to becoming real. The moment pros like Garrigus actually tee it up with unthinkable sums of money on the line is the moment PGA Tour pros are going to think harder about the entire system. What happens then will give us the clearest idea yet of what’s next.

Zak: The thought of Robert Garrigus cashing in should have all our respective attentions, at least for one tournament. Like Dylan said, the reaction to someone of lesser ilk raking in enough money to live fat and happy for a year will raise some eyebrows and cultivate some opinions. For that reason alone – all other details aside – it’ll be interesting. I think I’m more interested in seeing who will be playing in the fourth event than the first.

Berhow: It isn’t about to twist the arms of some of the world’s top 10 into playing, but it’s the latest domino to drop and it counts for something. I agree with Dylan that it makes it seem more real. We’ve been hearing for months that names are going to be announced soon, and while we still don’t have that, we have one real human who is looking to tee it up. That first tournament field might really be… interesting. But I’m still looking forward to seeing what it shakes out to be.

Kerr-Dineen: It’ll have a small and incremental effect on making it easier for other pros in the future, which is the whole point. This league is going to pick off players, slowly and surely, bit by bit. Each year it’ll get slightly higher-ranked ones until the exercise becomes normalized along the way. Garrigus isn’t a household name, but he doesn’t need to be. He just needs to serve as the first step in the process.

4. ESPN’s latest 30 for 30 doc “Shark,” debuted last week, and it featured Greg Norman’s rollercoaster career and, specifically, heartbreaking Masters loss in 1996. Did the doc teach you anything you didn’t know about Norman, or instead remind you of something you might have forgotten?

Dethier: It taught me that Norman called CBS in the early morning hours of Masters Sunday in ’96. Think about that. Think about Scheffler spending his Sunday morning on the phone with CBS this year. What a way to focus your energies! I was intrigued with Norman’s stated ability to come to peace with his near-misses. And wow, there were a lot of them.

Zak: It kinda should teach us that timing is everything. The timing of this doc, coming out after the Masters and not before. The timing of a doc on Norman at all, as he tries to maintain a level of relevancy in the game. It’s all a bit fishy to me, but I might just be wearing a tin-foil hat.

Berhow: I learned that the pain of a near-miss while at the doorstep of one of your biggest career aspirations never really goes away, which was evident watching Norman watch himself down the stretch. Could see it all in his eyes.

Kerr-Dineen: The doc cast a fascinating light on Greg Norman’s outlook on his own career. Good, bad or lucky, Norman resigned a lot of things to fate. When he was meant to win, he won. When he wasn’t, he didn’t. It’s unusual to hear a top player talk like this. The Tiger Woods ‘or Jack Nicklaus’ of the world often talked of making their own fate through sheer force of will. Norman was a talent of a different ilk, and that laissez faire attitude is ultimately what allowed collapses like the 1996 Masters to happen.

5. Speaking of the 30 for 30 doc, which pro golfer or golf figure would you most like to see featured next?

Dethier: Anthony Kim, of course. But Phil Mickelson feels like a more likely subject, which would be terrific: His last few months could be a doc in and of itself!

Zak: Patrick Reed, for all the reasons that you already know.

Berhow: Good picks. I’d like to throw Dustin Johnson’s name in there too. He’s had several career highs, lows and controversies, and he’s a way more interesting guy than the version the public sees through press conferences.

Kerr-Dineen: Moe Norman. So much to unpack, and so many unknowns about a talent who has reached almost mythical status.

6. The next iteration of The Match is back – but for the first time won’t have any pro golfers teeing off in competition. Star QBs Josh Allen (Buffalo Bills) and Patrick Mahomes (Kansas City Chiefs) will face off against Tom Brady (Tampa Bay Buccaneers) and Aaron Rodgers (Green Bay Packers) in a 12-hole match at the Wynn Golf Club in Las Vegas on June 1. No Phil, no Tiger, no problem? What’s your interest level in the latest lineup?

Dethier: Medium-high. I’m a sucker for these because I think it’s a chance to learn more about interesting people. It doesn’t have to be much more than that, but these are four of the most intriguing athletes on the planet, and they’ll be competing. I’ll gladly tune in once or twice a year to see how it all goes down. It doesn’t have to be deadly serious (a la The Match I, ft. Tiger vs. Phil). It can just be fun!

Zak: I can’t tell if it’s happening on the eve of the US Women’s Open is a good thing or not. Kinda odd timing that might seem like a distraction. But also might get the common sports fan thinking about golf that week, which is always great.

Berhow: I’m more interested in this one than the last (Brooks vs. Bryson) – which was a little too manufactured for my taste – but that’s not saying much. We at least don’t have to feign any bad blood here; just four dudes playing some golf. I still think the best one of these was the second edition (Tiger and Peyton vs. Phil and Brady), and that’s because there was some personality exerted (mostly from Brady and Manning). If we get some of that from these guys it could be entertaining. I think it’s smart to at least try it; we won’t know if the formula works otherwise.

Kerr-Dineen: I find it rather funny that what started with golfers playing golf in a heavyweight-style matchup – with the subtext that this could be a new revenue stream for more top pros in the future – has since morphed into something that leaves professional golfers entirely left behind . I’m not all that interested in watching, though my general gripe with The Match is that it’d be better off looking into more inventive formats. Some kind of Big Break-style skills challenge between these players has the potential to be far more entertaining.