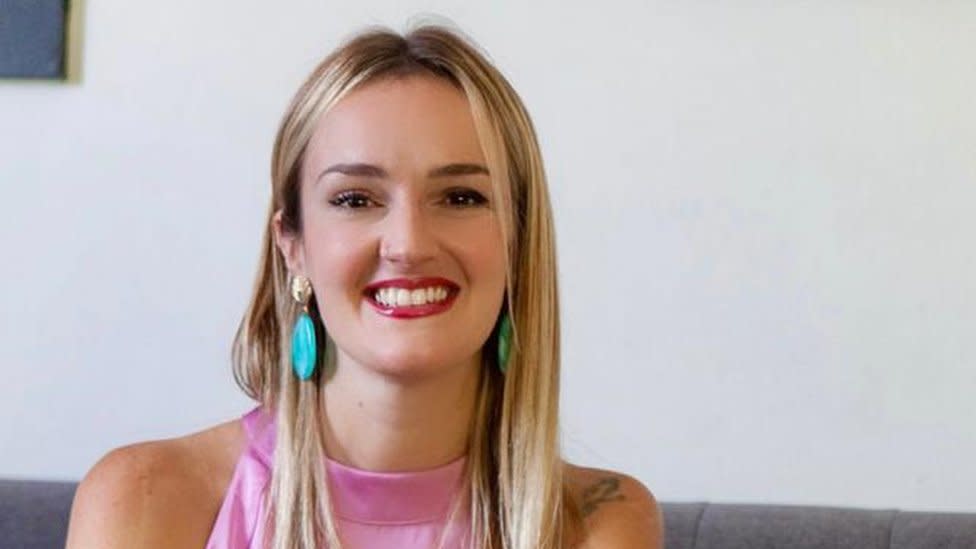 In Argentina, there are traces everywhere of distrust and even trauma related to the economy.

For Jerónimo Ferrer, a formative memory is of Argentina’s crushing financial crisis at the end of the 1990s – when bank accounts were frozen and, almost overnight, people’s savings evaporated.

He’s not alone. One engineering student I spoke to keeps all his savings, in US dollars, at home because he fears that the banks will again devalue holdings overnight.

While many Argentinians are, by necessity, experts on the state of the economy – from the sky-high level of inflation to the current unofficial exchange rate between the peso and the US dollar – Mr Ferrer has gone further than most.

Since 2019, he’s run a walking tour called “Our local crazy economy & Bitcoin tour of Buenos Aires”, where he explains to tourists the level of restrictions Argentines face, such as limits on foreign currency transactions, or bans on payments in instalments for international flights.

He also provides a primer on cryptocurrency, especially Bitcoin, and why he believes it is a valuable alternative to the volatile and highly-controlled Argentine peso.

“When you have restrictions, you need tools for freedom,” Mr Ferrer says.

For many crypto enthusiasts around the world, decentralized and digital currency is primarily about ideology or profit. But for many Argentines, it fills more basic needs.

“I trust more mathematics and software than I trust politicians,” Mr Ferrer explains. “I think Bitcoin for Argentinians should be a no-brainer.”

There are other ways that strong government intervention in the economy has helped cryptocurrency gain a footing in Argentina. For example, it’s relatively cheap to run an energy-guzzling Bitcoin mining operation, because the cost of electricity is kept relatively low.

Bitcoin mining is the process that creates new Bitcoin. It involves computers solving complicated maths problems. Solve the problem and you are awarded Bitcoin. It sounds simple but involves elaborate computer systems, requiring lots of electricity to run and cool them.

The University of Cambridge Center for Alternative Finance estimates that globally, the electricity used in Bitcoin mining to be around 137 terawatt hours per year. That’s about the same as the annual use of some countries, like Norway or Poland.

Producing that electricity will be contributing to global carbon dioxide emissions, but it is difficult to estimate how much.

However, in Argentina such environmental issues are often eclipsed by financial concerns.

For some early adopters of cryptocurrency in Argentina, even a relatively young and unpredictable currency is preferable to the extremely changeable peso.

Bitcoin, the most popular cryptocurrency, may also help to buffer against high inflation, since there’s a finite amount of currency that can be created.

Inflation, which measures how the cost of living changes over time, is an ever-present concern in Argentina. The year-on-year rate of inflation is staggering, at over 50%.

“In the pandemic, people noticed this situation, and to protect their money they chose to look for an asset that was limited,” says María Mercedes Etchegoyen.

Ms Etchegoyen is a lawyer specializing in intellectual property, as well as a member of the executive committee of the NGO Bitcoin Argentina. She helped start the Cryptogirls community to tap into the increased interest in cryptocurrency during the pandemic.

So far, the government has taken a relaxed attitude to the cryptocurrency boo. “In Argentina, there is no specific regulation on cryptocurrency,” says Ms Etchegoyen.

However, the Central Bank has been issuing warnings about crypto-based scams.

It has acknowledged that the level of crypto use isn’t high yet, but is growing rapidly and merits concern.

Ms Etchegoyen is concerned about the uneven access to cryptocurrencies.

So far it is the preserve of a minority – largely a young, male, tech-savvy, and relatively affluent population. It’s tech workers, not farmers, who are being paid in Bitcoin.

“Today it’s not a technology that everyone can access,” acknowledges blockchain consultant Lucia Lizardo.

Yet efforts are underway to expand the reach of crypto – partly through financial products that offer a stepping stone between traditional and cryptocurrency.

Three Argentine start-ups now offer debit cards for crypto-based transactions. One of these companies, Lemon, was founded in a Patagonian town where 40% of shops accept Bitcoin.

Some people in Argentina are also turning to “stablecoins”, which are pegged to the US dollar and are therefore less prone to fluctuations in value.

Of course, crypto will not provide a one-stop solution for Argentina’s economic woes. And it brings its own problems of currency speculation, fraud, and its environmental impact.

Overall, though, “I think this is like a revolution for young people,” comments Ms Lizardo.

For Mr Ferrer, the need is clear. “This is our money, and it’s the only one that politicians can’t destroy.”