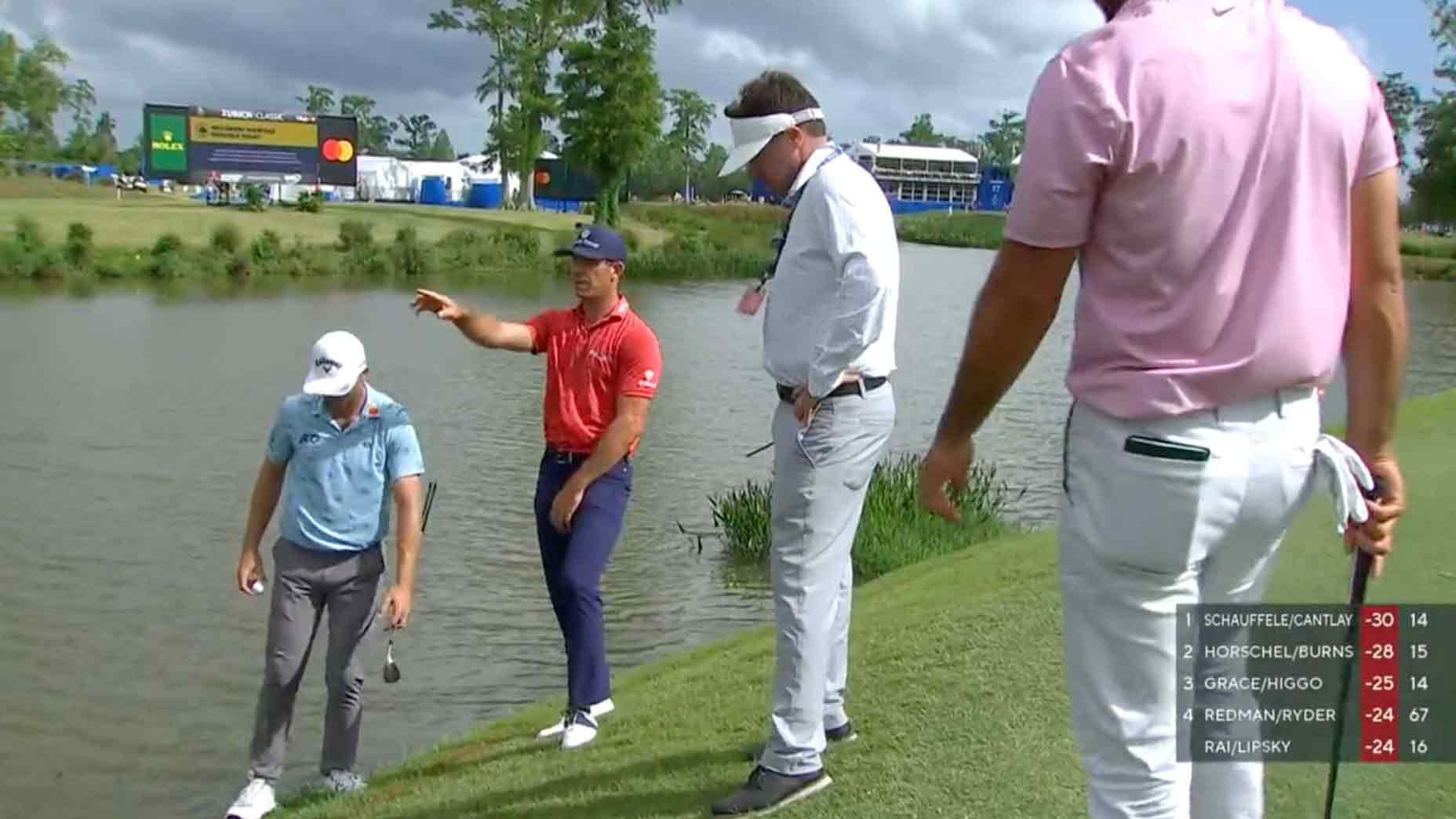 Billy Horschel (in red shirt) making his case on Sunday.

Golf may be a game of inches but sometimes golfers and their partners are required to assess those inches from hundreds of yards away.

On Sunday, in the final round of the Zurich Classic, Billy Horschel and his teammate, Sam Burns, and playing partners, Jason Day and Jason Scrivener, found themselves in just such a situation when Burns’ tee shot on the 299-yard par- 4 16th hole at TPC Louisiana splashed into a lake to the left of the green.

The ball touched down on a bank where it bounded into the water. Key question was, on which side of the hazard line did the ball land? If it had landed on the in-bounds side of the line, Horschel – who was playing the ensuing shot in the alternate-shot format – would have been allowed to drop within two club-lengths of that spot no nearer the hole (see box 2, below), which would have left Horschel with a fairly straightforward chip.

But if the ball had bounced on the hazard-side of the line, Horschel would have had to have taken his drop from the point where his ball last crossed into the hazard (see box 1, below), which would have resulted in a much longer and more difficult wedge shot. With the tournament still in the balance and Horschel and Burns in contention, the ruling was a crucial one.

So it was up to Horschel, who had kept a close eye on Burns’ tee shot – well, as close an eye as you could keep on a 1.68-inch-dimeter ball from 900 feet away. Best Horschel could tell, the ball had first touched down above the line.

“I just don’t think I could have seen the ball land below the red line from back there [the tee] because of the elevation difference and being blocked out by the bunker, ”Horschel said as his group and a walking official discussed the matter. “So, for me to see it land, it had to be above the red line. But I’m 300 yards away. ”

TV did have it, but only kind of. The camera angle was such that it also made the ruling too close to call. You can watch it all here:

PGA Tour rulings can make for gripping television. You have the protagonist arguing his case; other players and caddies describing whatever they saw (or didn’t see); an official in the role of detective, surveying the situation and asking pertinent questions; another rules expert – in this case Craig Winter of the USGA – weighing in on the telecast. In the juiciest of rulings, like we saw with Viktor Hovland and Joel Dahmen vs. Daniel Berger at the Players Championship earlier this year, you even have eyewitnesses challenging the protagonist, leading to some of the most deliciously tense drama you’ll see not only in golf but in any sport.

At the Zurich, no one took issue with what Horschel said he saw, but we did get one delightfully candid remark from Day, who said, “I didn’t see it splash, but I didn’t really pay attention.”

Later in the episode, Gary Young, the Tour’s chief referee, joined the mix by way of radio.

“We have to go with what they know,” Young can be heard saying of Horschel’s characterization of the ball’s path. “So, if he’s confident that it bounced there—”

“—I swear to God it bounced,” Horschel jumped in. “I know it bounced. ”

When asked about the incident after his round, Horschel added, “I’m one to play it safe, but I was pretty confident that the ball landed above the red line.”

And so it was. The officials deemed that the ball had touched down above the line, and Horschel began the drop proceedings next to the green. After his first two drop attempts rolled back down the slope and across the hazard line, Horschel placed his ball. From there, Horschel hit a nifty chip to within 2 feet, and Burns tidied up the putt.

An unconventional par was in the books, and so was another chapter of PGA Tour rules intrigue.

As GOLF.com’s executive editor, Bastable is responsible for the editorial direction and voice of one of the game’s most respected and highly trafficked news and service sites. He wears many hats – editing, writing, ideating, developing, daydreaming of one day breaking 80 – and feels privileged to work with such an insanely talented and hardworking group of writers, editors and producers. Before grabbing the reins at GOLF.com, he was the features editor at GOLF Magazine. A graduate of the University of Richmond and the Columbia School of Journalism, he lives in New Jersey with his wife and foursome of kids.