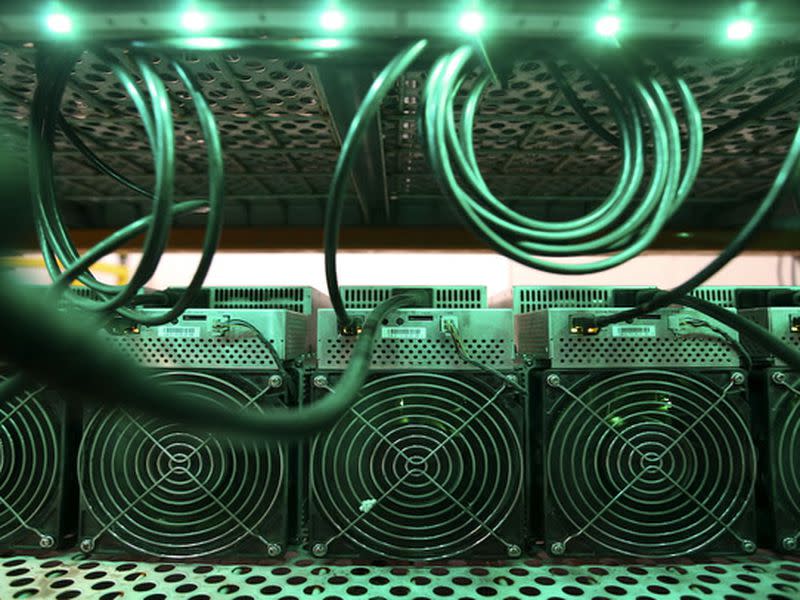 Let’s start with a simple fact: Buying and holding bitcoin (BTC), the asset, is not what gives people power over the Bitcoin network. Holding bitcoin simply means being able to benefit from the network’s adoption and growth (expressed in price appreciation) and it affords users with features such as ownership of a scarce bearer asset that can be transacted quickly, cheaply and without permission from any intermediaries.

However, the security, integrity and evolution of the network rests with coders, miners and the thousands of individual nodes who track the blockchain continuously. In other words, rather than holding bitcoin as shares, when it comes to influence it’s about having a stake in the network itself – most importantly, as a miner.

Ben Caselin is head of research and strategy at AAX.

The significance of holding power over a global network should be obvious. Whether it’s OPEC, SWIFT, the Strait of Hormuz or internet infrastructure, it’s clear how well-positioned stakeholders can leverage their measure of control over a network to exert influence. With Bitcoin, however, much of the authority rests in hash power. That’s where mining comes in as a matter of national security.

National security is a term often used (and misused) to justify policies of surveillance, military deployments, technologies or other legal implementations. In its most benign form, national security is a defensive stance aimed at ensuring the safety, stability and sovereignty of a given jurisdiction, and is a stepping stone towards a more equitable global power distribution and possibly peace.

As the Bitcoin network grows from an internet curiosity to a global settlement layer that’s open to all – potentially even sanctions evaders like Russia or North Korea – nation-states may come to realize they want a greater say in the direction and overall operations of the network . To this end, having a stake in global hashrate is key. By fostering, rather than banning domestic mining industries, nations can also ensure that control over the network does not fall into the hands of their enemies.

Power on the Bitcoin network

It should be noted, however, that influence is limited: Miners cannot create extra bitcoin, steal coins or change the underlying code. Rather, influence is what guarantees that transactions actually go through and get included on the blockchain.

Proof-of-work mining is integral to how the Bitcoin blockchain works. Around the world, miners look for cheap energy sources to run their mining rigs at maximum capacity at the lowest possible cost. The more hash power miners can muster, the higher the chance is they will win a next block, receive the reward of 6.25 newly minted bitcoin and, crucially, add their version of “transnational truth” to the global Bitcoin ledger.

In this system, roughly every 10 minutes a new block of records is added to the blockchain, and only when a block has been verified and validated will transactions become permanent. It should be stressed that individual nodes around the world need to accept the new block, which they will do automatically if all the rules of the Bitcoin protocol have indeed been respected and no double-spending or manipulation has occurred.

Meddling with the record is extremely costly. First of all, even with a large stake in global hashrate, probability dictates that this does not guarantee winning each block. Second, if a corrupted block of transactions was indeed to go through and was consequently rejected by the majority of nodes, any reward associated with that block would be annulled.

Nonetheless, while Bitcoin’s decentralized nature affords it its status as the most secure network in the world, its security would be severely compromised if, say, a given miner – perhaps acting on behalf of a state actor – were to gain the majority hashrate (ie , 51%). Technically this would open the network up to the potential for censorship of other miners and transactions, and similar forms of overreach.

But to really see the argument and understand how having a stake in global hashrate supports national security and eventually adds to geopolitical equilibrium, we have to look at the incentives for participation from a number of different angles.

In 2019, the world’s largest crypto exchange, Binance, suffered a hack that saw $ 40 million worth of bitcoin scuttled from its coffers. The company’s CEO, Changpeng Zhao, then publicly floated the idea of ​​”rolling back” Bitcoin’s blockchainwhich would recover the stolen funds back into Binance’s custody (and reverse all transactions on the blockchain that had occurred since the theft).

Doing so would require convincing a majority of bitcoin miners and node operators to follow his plan. Pushback from the bitcoin community was immediate and no rollback was attempted. From the onset, consensus was against Binance and the company had to take the loss and fix its internal systems instead. Imagine if geopolitics could be as straightforward.

Consensus in the industry isn’t always conservative, despite a great degree of emphasis being put on blockchain’s “immutability.” Changes can be made, as was the case in 2016 after the Ethereum community voted to fork the chain to recover $ 50 million in stolen ether (ETH) following The DAO attack.

Consensus was that the move was vital for the rehabilitation of the nascent blockchain, although a sizable portion of the community did reject the intervention. The Ethereum network we know today, which Microsoft (MSFT), JPMorgan (JPM), Amazon (AMZN) and other corporate giants are reportedly already using, and with a market cap of over $ 300 billion, is a result of that rollback. Technically, it’s an off-shoot. Its predecessor, the original Ethereum chain where the hack has not been undone, is now known as Ethereum Classic. It has a market cap of a little over $ 3.5 billion.

The same mechanism that helps ensure blockchains are difficult to change is essential when it is time to upgrade the network. Hash power drives both integrity and change, and represents a type of influence in being able to enforce norms and preventing abuses on the network – all of which requires consensus.

Currently, the US is home to the most hash power, a position it earned after China forced miners within its borders to shut down. I’d argue it was a mistake for China to drive out its domestic mining industry because the more hash power that resides in a given country, the more influence the state could have in protecting its interests. And let there be no misgivings: bitcoin is held and still thrives among Chinese investors.

Read more: Is Bitcoin Legal in the United States?

Imagine, for argument’s sake, the US housed zero miners and instead all hash power resided in Russia. This would not bode well for bitcoin investors, or investors in publicly traded companies exposed to bitcoin like MicroStrategy (MSTR) and Tesla (TSLA) in the US, given that Russia is both a technologically savvy country and profoundly undemocratic.

Similarly, what if none of bitcoin’s hash power resided in Russia but was dominated by the US and its allies? This would discourage Russian elites from storing their wealth in bitcoin and hamper potential efforts on Russia’s part around using bitcoin for global trade.

Granted, not all power resides with miners. Without the agreement by a majority of individual nodes, bitcoin cannot easily be weaponized or be subject to intervention. However, if, say, North Korea were to hack an exchange (as it has allegedly done before) and was intent on using these funds to stage a devastating nuclear attack on the world, it’s likely that even the most fanatical proponents of freedom and financial agency – stalwart bitcoiners – could be persuaded to support an intervention in the blockchain.

What’s of interest here as well is how individuals are able to participate freely in this global consensus network. We can see a direct link of reasoning and incentive that runs all the way from engaged individual participants spread out across the world to industrial-scale miners that have the potency to become integral to geopolitics.

That said, miners residing in a shared jurisdiction do not necessarily share the same values, nor should we assume an agreement between miners and the State. But we can foresee the formation of clusters through the establishment of associations, such as the Bitcoin Mining Council, State-initiated mining facilities such as in El Salvador or even certain regulations with which at least public mining companies would have to comply. In the end, consensus is not about homogeneity but about maintaining a balance of power – one that cuts across countries and viewpoints.

Unless an entire population decides to stay away from bitcoin, each jurisdiction is incentivized to gain a stake in global hashrate, just as domestic miners vie for local hash power. On Russia’s end, this might be to mine new bitcoin for local wealth generation, secure an avenue for trade and also to protect the assets of its citizens, invested corporations and, in future, potentially, its national reserves.

For the US or the European Union it is not just about protecting its investors; it’s really about retaining regulatory clout. US President Joe Biden’s executive order of March 9 calling for a unified approach to US crypto regulation may impact legacy and find easy implementation at the surface layer of applications around crypto. We saw this recently when Ethereum wallet MetaMask and non-fungible token (NFT) platform OpenSea – both US-based projects – unilaterally blocked Iranian and Venezuelan users from using their services.

However, unlike these apps and the majority of cryptocurrencies, Bitcoin has no CEO or homebase – it is an open and decentralized network. And so any attempt at regulation at the level of protocol or around security requires hash power to reside in the concerned jurisdiction. No hash power, no say.

It goes without saying that for any jurisdiction exposed to bitcoin, either through its citizens and the corporations it resides over or as part of sovereign wealth funds, having a stake in global hash power is vital.

An important aspect of this argument is to recognize that Bitcoin’s share of the global financial system is growing rapidly. It may seem marginal today but global adoption of bitcoin, the asset, continues to unfold at a faster pace even than the growth of the Internet witnessed in the late 1990s.

We know the reasons individuals and corporations may wish to save in bitcoin or place the asset on their balance sheet. Over the past two years especially we’ve seen more everyday people, billionaires, corporations, hedge funds and even countries warm up, if not fully embrace, bitcoin.

It should become increasingly clear why the next phase in the growth of this network and asset class is likely to include a race for hash power, in conjunction with the realization by both investors and regulators that participating in the operation of the network itself is the best. way to secure public interests in the long run.

Bitcoin does not just offer an investable asset, where holders benefit from its scarce supply and freedom from arbitrary policy-making and money printing. More broadly, it offers a global network for the settlement of an internet-native currency that falls outside the control of any single entity. It offers an alternative base-layer for the development of a more equitable global financial system which is both borderless and democratic by design. It constitutes the disarmament of finance, while still allowing for bottom-line moral imperatives to impact on consensus and execution.

As the global community of investors in bitcoin continues to expand, the significance of having hash power grows daily. As do the risks of not having it. That makes mining bitcoin a matter of national security.