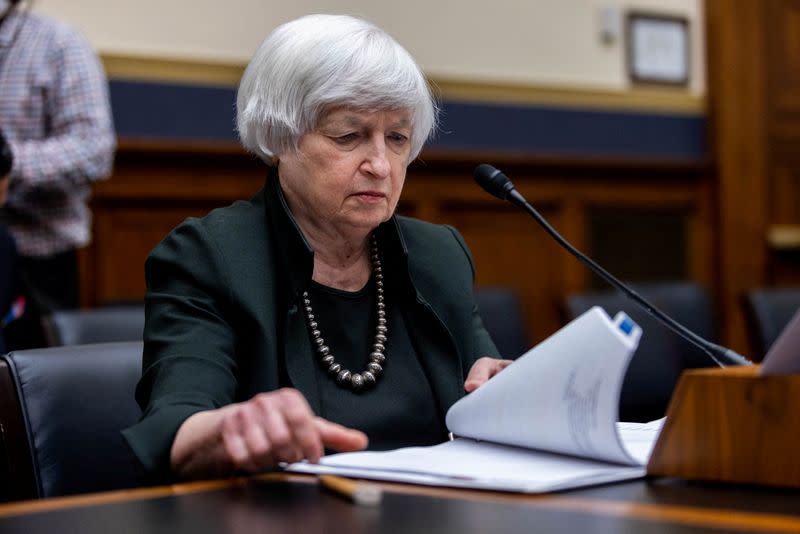 WASHINGTON (Reuters) – US Treasury Secretary Janet Yellen faces a gauntlet of tough questions about how the Biden administration has handled the economy in Congress this week, after admitting she was “wrong” about the path inflation would take.

Yellen testifies to the Senate Finance Committee Tuesday and the House of Representatives Ways and Means Committee on Wednesday, thrusting one of the most experienced, yet least political of Joe Biden’s advisers into the hot seat as Republicans hammer the president over inflation that has reached 40- year highs.

As Treasury secretary, Yellen, 75, was a key voice predicting price rises would be “transitory” through 2021 even as some analysts and investors warned the US economy could overheat. As Fed chair, she was criticized in 2017 for the opposite – cooling the economy to fight inflation that never came.

Congressional Republicans plan to grill Yellen on her faulty forecast, and the role the $ 1.9 trillion Biden-backed American Rescue Plan had in driving up prices, aides tell Reuters. They would also like to hear her abandon Biden’s bedrock plan to raise taxes on US companies and seek more federal funding that would fuel further inflation, Representative Kevin Brady, the top Republican on the Ways and Means Committee, told reporters.

Unanticipated, large shocks including Russia’s invasion of Ukraine and recent COVID-19 lockdowns in China have exacerbated the tightness in supply that has pushed up energy and goods prices in unexpected ways, Yellen and the White House argue. The “unprecedented” injection of financial assistance also contributed about 3 percentage points to inflation by the fourth quarter of 2021, the San Francisco Federal Reserve Bank.

While Yellen publicly retired the term “transitory” in December, she continued to reassure White House officials privately earlier this year that price pressures would likely ease in 2022, said one person involved in the talks.

Frustration is high in the White House over a gulf between the strength of the US economy’s recovery from coronavirus shutdowns, with a strong labor market and record company profits, and Biden’s low poll numbers.

While Yellen has no plans and is under no pressure to retire, conversations about who may replace her have percolated through the administration in recent months, with Commerce Secretary Gina Raimondo and former White House coordinator COVID-19 coordinator Jeff Zients topping the list of possible successors.

On the Hill, Yellen plans to repeat the White House’s mantra that inflation is “the administration’s highest priority,” a Treasury official said and that “the unparalleled strength of America’s recovery enables our country to address global challenges like inflation and Russia’s attack on Ukraine.” from a position of strength. “

But a forthcoming biography indicates she also harbored concerns that Biden’s signature $ 1.9 trillion American Rescue Plan, passed by Congress a month after he took office, would drive up prices.

Ultimately, Yellen “got comfortable” with the size of the relief program, mindful of the Obama administration’s failure to enact a stimulus package large enough to move beyond the Great Recession, and confident that the Federal Reserve would respond if inflation surged, according to excerpts. from Owen Ullmann’s book “Empathy Economics,” due out in September.

Yellen said Saturday that she never pushed for a smaller stimulus package, as suggested in the book, and that the overall package helped fuel the strong US recovery.

With limited options to substantially impact gas and food prices, the White House has embarked on a national roadshow to convince voters the Biden administration’s handling of the US economy has been positive. Biden’s approval ratings have been below 50% since August, raising alarms that his Democratic Party could lose control of at least one chamber of Congress in the Nov. 8 midterm election.

Administration officials concede Yellen’s frank admission during a May 31 television interview that she failed to anticipate inflation’s path was politically unwise, but say the Treasury secretary remains one of the most revered economic voices close to Biden.

Yellen created a smaller stir during a Group of Seven finance ministers meeting in Germany last month, when she invoked the word “stagflation,” a term associated with 1970s inflation spikes and sluggish growth.

She should choose her words more carefully on the Hill this week, some analysts say.

“She was the Fed chair and in that position you watch every single word you say,” said Harry Broadman, a former chief of staff of the White House Council of Economic Advisers and managing director at Berkeley Research Group.